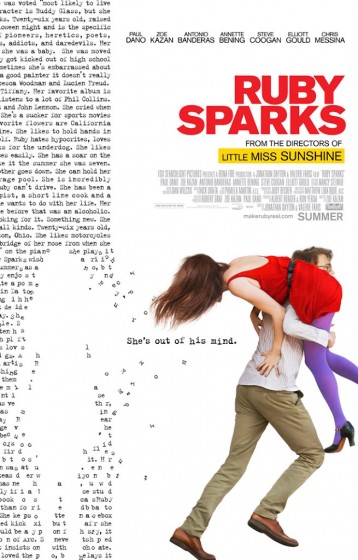 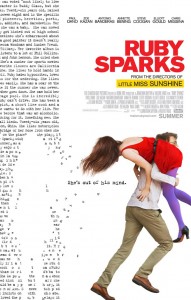 Ruby Sparks is almost two movies, or, at least, starts as one and then becomes another. That’s a neat trick if it’s done well as it is here.

The first movie is a light, magic-realist romcom as you can see by the trailer. You might think this is some kind of indie update of Weird Science: Calvin (Paul Dano), lonely guy, successful writer with one, beloved novel, struggles with writer’s block a decade later. In a dream he’s visited by this vision of his perfect woman, Ruby (Zoe Kazan), and decides to write her story. Quicker than you can say “Pygmalion” she shows up, fully tactile, breathing, cooking and living in his Hollywood Hills condo. In a scene that crosses over into farce, Calvin figures out he’s not hallucinating and that she’s happily real, and for a bit they’re blissfully happy. Then she starts to exhibit independent tendencies, and Calvin reveals he is more than lonely, he’s an antisocial control freak. But he still has a lot of power over her. She does whatever he chooses to write.

If Ruby Sparks was written by a guy, yeah, that Weird Science comparison would make more sense.
(Anyone watch that lately, though? The woman they create treats the two teenagers like the children they are. She’s like a maternal, or at least big sister, presence. It’s a whole lot more wholesome than you might recall, I’m just saying.) But this was written by the star, Kazan, and there’s a lot more going on here than supporting a male fantasy. If anything, the story demolishes the modern myth of the manic pixie dreamgirl, the objectification inherent in that image. It’s thematically kind of like (500) Days of Summer, where a character played by the Queen of the Manic Pixie Dreamgirls, Zooey Deschanel, is revealed to be person with her own dreams and intentions, despite what Joseph Gordon-Levitt imagines.

And that’s where the second movie comes in. As we swiftly move into the third act (the movie’s 104 minutes zoom by) a slightly frothy, fantasy romcom has turned into something much darker, where Calvin’s character and self-obsession is tested by the reality of his creation. I wasn’t sure if the final scene really worked for me… it lets Calvin off the hook. Maybe we should assume he’s learned something by then. But the tonal shift is impressive, so kudos to directors Dayton and Faris. I wasn’t a big fan of their smash Little Miss Sunshine, but here they let the performers do their thing without getting too fussy.

And the performers are the key to the thing. While I respect Dano’s abilities, I don’t find him a sympathetic onscreen presence, and thought he was simply overwhelmed in his double role in There Will Be Blood. Here he’s credibly vulnerable without exhibiting a lot of actory tics, and that vulnerability believably shifts into anger. He’s also dressed in some of the most unflattering hipster wardrobe I’ve seen in ages. (When did my grandfather’s slacks become cool? Or maybe those pants are just show how out of touch he is?… and I guess, if I don’t know which is the case, so am I.) Kazan is fresh and unselfconscious.

Around them are a great cast in small but important roles, including the ever-sleazy Steve Coogan, Elliot Gould, Annette Bening and Antonio Banderas. For some reason Chris Messina just makes me want to smack him every time he’s on screen, no matter what the role. (Sorry, Chris.)