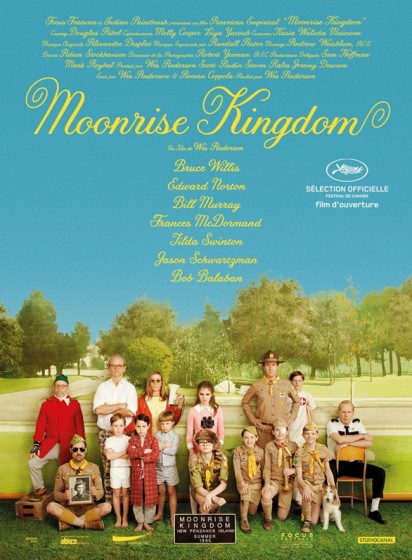 Directed by Wes Anderson
Written by Anderson and Roman Coppola

I’m happy Wes Anderson is out there. Because, say what you will about him—whether his very particular style of filmmaking is to your taste—it’s hard to argue against originality, which he has in spades. After Bottle Rocket, Rushmore, The Royal Tenenbaums, The Life Aquatic With Steve Zissou, The Darjeeling Limited/Hotel Chevalier and Fantastic Mr. Fox, he’s created a unique and unmistakable little sandbox to play in. And while I don’t love all his movies, there’s an unmistakable joy in his work. He’s a lover of manners and misfits, and that’s no bad thing.

Moonrise Kingdom is exquisitely Andersonian from its opening shot—a portrait of the Bishop’s lighthouse home, located on an island off the New England coast—followed by the framed tableaux he so enjoys, the miniatures that make everything look like a dollhouse, not dissimilar to the Belafonte cutaway in The Life Aquatic.

And like Rushmore, this is a story told from the perspective of children, with the adults all confused and/ or unhappy. Anderson’s worlds are often places where the kids are as melancholy, but much wiser, than the grown-ups.

Susie (Kara Hayward), the eldest of four Bishop offspring, is a “troubled child.” Her lawyer parents (Frances McDormand and Bill Murray) don’t know what to do with her and her temper. She meets Sam (Jared Gilman), an orphan and a boy scout. He’s as much an outcast as she is, a pariah in his troop.

Suzy and Sam correspond. They plan to run away together, which they do, across the island. But with the help of local policeman Captain Sharp (Bruce Willis) and Scout Master Ward (Edward Norton), they are captured, at least temporarily, as a big storm bears down. Bob Balaban, of course, narrates the meteorological history of the event. All this takes place in September, 1965.

If you’ve seen the films mentioned above, then you’ll know very much what you’re in for. I’m one of the few who didn’t care for the critically acclaimed Fantastic Mr. Fox—I felt that the twee preciousness that Anderson is sometimes accused of finally got the best of him in this animated adventure—but the parallels in Moonrise Kingdom with his other, great work are many. Just like The Royal Tenenbaums, there’s a palpable feeling that you’re flipping through a family photo album as you watch the movie. The sense of frozen-in-amber nostalgia, the yellow and green colour palate, the thematic musical cues (here Hank Williams and Benjamin Britten), the care to small details in the costumes and props. Luggage plays a big role, just as it did in The Darjeeling Limited.

And yet, despite these familiar thematic elements, I didn’t feel any sense of repetition with his earlier work. This is just another room in Anderson’s sprawling dollhouse. And this one has space for sparkling smaller roles from Jason Schwartzman and Tilda Swinton, too.

But it’s the kids who really shine. Hayward’s Suzy, who loves Parisienne pop music, and seems for all the world like a less medicated, less symmetrical Lana Del Rey. And Gilman’s Sam is adorably geeky. Their romance is lovely and true.

Some may say that Anderson’s films are becoming further removed from any recognizable reality, that they’re becoming more like Max Fisher’s theatrical productions from Rushmore. Maybe, but is that a criticism? I’m totally OK with it.