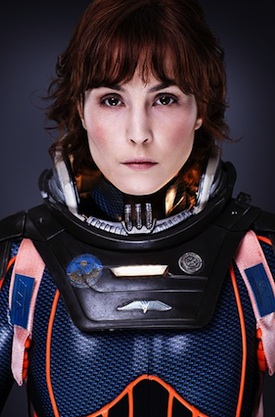 In a recent issue of Empire Magazine, Simon Braund started like this in a piece about The Texas Chain Saw Massacre: “It’s easy to scoff at the weight of cultural significance so often foisted on sci-fi and horror films—chin-stroking cineastes, seemingly oblivious to the films’ primary objective (i.e. to scare the pants off folk), teasing out as many metaphors for this, parodies of that and references to the other as they can.”

I’m sure I’ve been guilty of this very thing. But I think, while it’s always good to try and understand the filmmaker’s intention, a movie always gets me in the viscera first. Then the brain engages and teases out other pleasures.

“Viscera” is a good word to throw around when talking about Alien and Prometheus.

Ridley Scott, director of both films, is certainly a more cerebral genre filmmaker than the average. While I acknowledge the amount of thought he puts into his films, considerable even though he’s not a writer, it’s his grace with an image and with creating worlds in his films that really impresses.

So much ink has been spilled in discussing the secrets of Scott’s other great sci-fi film, Blade Runner, a discussion that grows every time a new version of the film comes available—hopefully the recent Final Cut is the last word on that. Is Deckard really a replicant? This was always besides the point for me. I thought the addition of the unicorn dream sequence in the 1992 Director’s Cut a little silly. While I get why it’s there in relation to the origami Deckard finds at the end, and I think stories about what it means to really be human, about memory and identity, are fascinating—the specialty of the source material creator, Philip K. Dick—none of that stuff is why the film is great. It’s about the world Scott creates in the film, all of it. The mood, the look, the sound design, the soundtrack by Vangelis, the characters, the story, the sets, the costumes—more or less that order—are, IMHO, the reasons why Blade Runner rules.

The Alien movies are also layered with narrative intent and symbolism. I read a piece somewhere—and please excuse my faulty memory in that I don’t recall the source—that posited the Alien movies are really about the fear of pregnancy through rape. Even more generally, I’ve heard people say they’re actually about our fear of illness. Primal stuff. Yeah, OK, but I also know that when Ronald Shusett and Dan O’Bannon wrote the script to Alien, they were simply creating a haunted-house-in-space movie. And when Scott designed the thing, with the help of people like H.R. Giger, he was trying to create something that would just scare the pants off folk. I saw Alien again last week. I was amazed at the tone of the thing, created using sound, sets, lights and a cast of very talented actors. It’s frightening, claustrophobic, and an amazing visual experience. Jerry Goldsmith’s score is so good and creepy, the Prometheus marketing people were clever to reference it in the trailers, even though the new movie’s actual score by Marc Steitenfeld feels much more indebted to John Williams.

I’ve probably seen Alien a half a dozen times. I still like the way it scares me. I like how the singular horror of the chestburster scene remains the most powerful moment in the film, while the phallic little beastie is actually kind of funny when it skitters off; A cue for nervous laughter. I really enjoy how O’Bannon brought with him from his earlier sci-fi comedy Dark Star the sense of class structure. That was pretty new in sci-fi. Here it divides vertically; Parker (Yaphet Kotto) and Brett (Harry Dean Stanton) complaining about their shares. They’re factory workers, bitching to management, represented by Dallas (Tom Skerritt), Ash (Ian Holm) and even, to some degree, Ripley (Sigourney Weaver). All of this I thought about after. Maybe this is just a case of what you experience in person, watching the film, as opposed to what you dwell on after the fact. I didn’t think much about what the alien symbolized, though its teeth, shiny, metallic and covered in goo, and eyeless carapace… brrr. It’s frightening, sure ’nuff.

Going into Prometheus this weekend, I didn’t expect that I’d necessarily have a lot to think about afterward. Or even if I did, that the intellectual takeaway would outweigh the, ahem, viscera. But I think it almost does, this time.

Some of that is problematic—loose ends that I’ll get to in a second, questions that may exist because of storytelling problems—and some of it is due to all that is simply unsaid, left for the viewer to intuit. Much of which, I confess, I may have missed.

I read this piece by Adrian Bott, which gets into the symbolism of the Prometheus myth and cross-references it with Christian allegory. It’s Prometheus spoiler-heavy, as is the rest of this post. But if you’ve seen Prometheus, go read it and then come back here. Did that make your head explode? It did mine. David as an angel figure makes a lot of sense to me. As does the idea of the Engineers being displeased with their creation. Self-sacrifice and a Space Jesus? Yeah, I can buy that, too. The answer to the question of why they’d want to destroy humanity, yes, I get that.

So, questions and answers that work for me, and more questions. Screenwriter Damon Lindelof has said there are no accidents in this script. Everything means something. So, with that in mind, the first, most obvious:

Q: In what way is Prometheus a prequel/companion-piece to Alien?

A: In the third act of Prometheus we see the bridge, if you will, of the alien ship, with the Engineer- Space Jockey. Is this the same bridge with the Space Jockey corpse we see in Alien, the guy who according to Dallas has “been dead for a long time”? Well, no: It’s the same kind of ship, but another Engineer, but not the guy we see at the end of Prometheus, since he’s clearly dead at the end of the film. David says there are many ships. The one in Alien must be another ship, one carrying a host of those eggs, another bio-weapon created in the labs on LV-223. Maybe on their way to earth when the ship crashed? Or maybe LV-426, the planet the Nostromo visits in Alien, is another bio-research facility, another launch base where the new creations got out of hand. Does this make sense?

Q: If the creature at the end of Prometheus is a proto-alien—here we need to distinguish between aliens: I mean the Alien alien, so the xenomorph—how did it evolve into the xenomorph queen (first seen in Aliens) and lay all those eggs in the hull of the ship on LV-426, 40 years after the events depicted in Prometheus? (This is presuming Scott considers Aliens canon.)

A: This I don’t have an answer for. There are plenty of possibilities, I suppose. Perhaps the proto-xenomorph laid an egg, the proto-facehugger affixed itself to the face of another Engineer, frozen in another ship, who piloted the ship from LV-223 to LV-426, before dying when the alien queen chestburster exited his/her ribcage, and went on to lay all those eggs. If anyone else has a more likely scenario, please share it in the comments. Q: Why did David infect Holloway with alien fluid?

A: If David is a tool of Weyland, his motivations are the same as Weyland. Weyland wants to live forever, so David wants to check the effect of the alien tech he finds on human subjects. He’s not mean, but he’s certainly calculating. With Weyland’s death, he could be very useful in Shaw’s life going forward.

Q: Why does the Engineer’s decapitated head explode?

A: I don’t know. Maybe it’s been infected with a black fluid biospore that doesn’t activate until the head does. Q: If the preferred mode of Engineer travel is the “ring ship,” then why do they fly in a disc in the intro segment?
A: Again, don’t know. Maybe Engineers have a lot of different kinds of ships…? Or maybe it’s as simple as the difference between the creator and the destroyer Engineers. More class distinction?
Q: What exactly are the pixelated documentations of past events the crew of Prometheus see inside the pyramid? And why can they see them?
A: Some sort of recording program was activated, presumably. Their presence changed things in the space. In the name of security, maybe it was useful to the other Engineers to record all their activities, especially in a bio-weapon facility. Q: How does Janek learn what’s actually going on on LV-223, with the weapons and such?
A: I don’t know the answer this, either.  It’s important information to the plot, but I don’t think Janek is necessarily the best person to deliver that info. Unless I missed something.
These were my key questions with my best answers at this stage. Please suggest other answers if you think I’m off base. Or if you have other questions maybe I can answer, feel free to pose them.
I found this discussion of the elements of the film, too, which parallels some of mine. And this review on Wired had more problems with the film than I did, but as many questions, left to commentors.
One last thought: If the Engineers created us, maybe all those other aggressive creatures, slimy and protean, are just other products of their factories, like we were. Are human beings just evolved bioweapons?
Hats of to Ridley Scott: the brain matter of Prometheus is as interesting as the guts.

One more last: Is Meredith Vickers a robot?

That comes up here. (Really enjoyed this discussion, especially about Scott’s visual magic, even though the writer was much more frustrated with the missing pieces of the puzzle than I was.)

I think she might be, but I don’t need to know that bad.