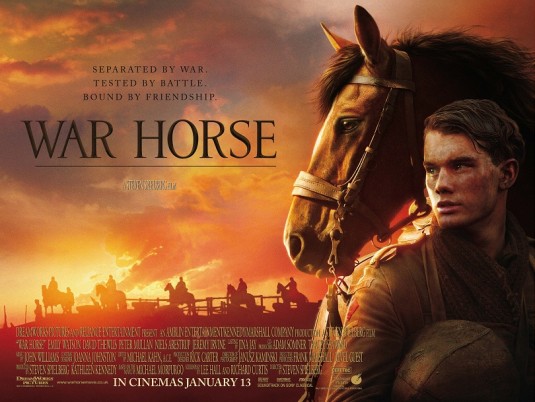 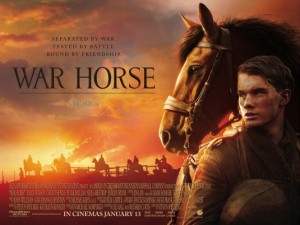 Directed by Steven Spielberg
Written by Lee Hall and Richard Curtis, from the book by Michael Morpurgo

Sitting in a mostly empty movie theatre watching Spielberg’s new epic movie, I playfully imagined what War Horse would be like as directed by Terrence Malick, probably because I just reviewed 2011 and Malick’s The Tree of Life featured prominently. War Horse by him would likely be equally as grand in scale, with even more shots of the Devonshire countryside, maybe more time with the cavalry charging through the tall grasses in occupied France, a gorgeous scene near to the beginning of the second act. Frequent Spielberg collaborator, cinematographer Janusz Kaminski is to be applauded for those wide shots, so beautifully rendered.

But I can bet Malick would have erred on the side of natural light, resisting the urge to overlight all the characters in close-up, creating a strange artificial quality, even in the exterior scenes. Characters such as David Thewlis’ Lyons would have been less of a caricature. The scenes of war would have seemed less staged, less calculated and more organic, probably a lot more shocking. Spielberg can do shocking war, of course, but this is too slathered in amber to shock.

And I can guarantee War Horse by Malick would have been a whole lot less melodramatic, hokey and obviously manipulative.

The tale, based on a children’s novel that became a renowned stage play, is about a thoroughbred named Joey, bought by a crusty farmer (Peter Mullan) to work the fields, a job the horse is not suited to do. The farmer’s son, Albert (Jeremy Irvine), eager to impress his father, bonds with the horse. In a ridiculous scene where John Williams’ typically huge score telegraphs how we’re supposed to feel, Albert hooks Joey to a plow to till a rock-strewn field while townsfolk suddenly appear out of nowhere to watch. Maybe field-plowing was some kind of great spectator sport in pre-WWI Devon.

When war comes, the farmer sells the horse to the British army, where Joey takes part of the cavalry charge mentioned above, allows a pair of German brothers to escape their duties on the front, keeps company with a French vegetable farmer and his granddaughter and eventually gets stuck in No Man’s Land between the trenches, leading to the inevitable reunion with Albert, who with the other young men of his village, joined up when he was old enough to fight.

In between there’s a lot of gorgeous shots of the horse and the French countryside, a lot of charming German- and French-accented English, and not a little boredom.

It’s not a complete mystery to me what Spielberg is trying to do here. He’s making an old-fashioned epic, a John Ford-inspired fable of innocence and humanity in war, something aimed at a younger audience, presumably. But, I wonder, why this urge to recreate the past, in increasingly less-satisfying copies? Why this, after such forward thinking films such as Munich and Saving Private Ryan? It’s a troubling trend in his films, where even his The Adventures of Tintin felt like a less-involving animated copy of his own Raiders of the Lost Ark. But that’s a question for a whole other piece.

In my mind, the greatest horse-and-his-boy movie ever was Carroll Ballard’s The Black Stallion, and while it was also a period piece aimed at a younger audience, it had little of the treacle that Spielberg loads on here by the bucketful. In War Horse Spielberg never misses an opportunity to sentimentalize, at one point even suggesting the horse has the awareness to sacrifice itself for an ailing fellow stallion. Pull the other one, Steven, it jingles.

There was enough of Spielberg’s easy storytelling ability on display to keep my interest through the bloated running time, but leaving the cinema I was suppressing my gag reflex at the overwhelming sweetness, almost angry at all I had to sit through. I won’t spoil the final few scenes for you should you choose to see it, but I can tell you they’re maybe the most blatantly calculated of Spielberg’s career, where he indulges his most unsubtle inclinations, evoking even Gone With The Wind. It was hard not to laugh.

While I can understand those who revel in the beauty of the animal and even the grand scale of the film, I would think only an audience of tween girls with equine fixations might find War Horse their choice for film of the year, so am shocked to see how many positive reviews it’s earning.

Call me a cynic, but I thought War Horse was horseshit.