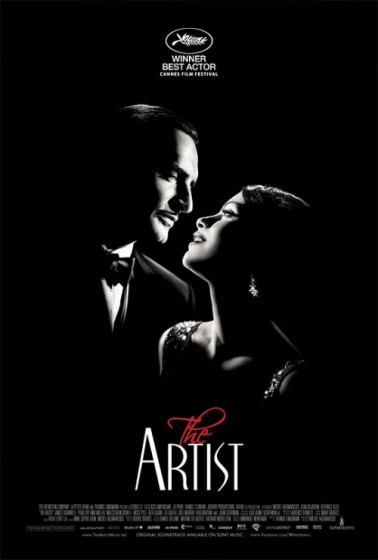 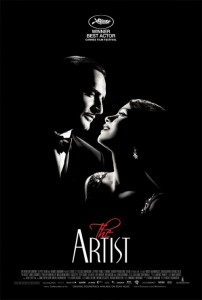 Written and directed by Michael Hazanavicius

Here’s a movie I saw in the perfect environment: an ancient rep cinema full of Boxing Day cineastes who lined up on the slushy sidewalk for the pleasure of seeing a silent movie. I’m sure my experience was improved by the surroundings and the audience.

And the film? Well, if you’re the sort to pay attention to buzz, this Belgian/French film shot in Los Angeles, a tribute to old Hollywood, has captured the hearts of the very industry it pays tribute to and you should expect to see it annointed come Oscar time. Or maybe that’s just the cunning plan of its American distributors, the Weinsteins, who know a thing about buzz and earning awards. Me, I found the film to be an emotional experience, which surprised me a little given the paper-thin premise.

It’s basically a retelling of A Star Is Born. George Valentin (Jean Dujardin, providing both the smizing and the fancy footwork of Gene Kelly in his prime) is a star of silent film in 1927. He’s cocky, but he’s earned it: with his lovable Jack Russell sidekick, he’s adored by his public. But talkies are on their way in, and so is Peppy Miller (Berenice Bejo, whose “sweetheart” appeal is easy to see), a delightful starlet with ambition. She and Valentin make sparks when they meet but never star together… he’s on his way down as she’s rising, with the invention of sound. And the studio head, Al Zimmer (John Goodman), sees the way the wind is blowing.

It’s about as simple as that. The narrative brushstrokes are very broad but cetrtainly universal, and you can see this film appealing to an international audience the way, say, Sylvain Chomet’s The Illusionist does. When you take dialogue away, a certain naive simplicity manifests. It’s hearts-on-sleeve time. And it works here, especially with the playful way Hazanavicius tells the story, with a few self-referential nods to the audience, like a dream in which Valentin can hear sound effects (and so can we) but can’t hear his own voice.

So much is conveyed by the faces of the leads, too. Though, knowing that the director was French, and suspecting his main cast of the same, I wondered how much this film plays to the French tradition of mime as much as it does classic Hollywood. Whatever the inspiration, there can be no argument the thing looks spectacular, the way its lit and shot both serving as a recreation of old silent film and as a credible recreation of Los Angeles of the era, as well as Chinatown or The Black Dahlia did.

But while the simplicity is laudible, it also feels like a bit of a trick. The tale of the perils of fame wrapped in a love story is as fresh as week-old, newspaper-wrapped fish. While I watched it, I was tugging at the loose plot threads and tut-tutting the predictable arc.

And yet, I can’t deny it moved me. It deked past my critical faculties. So, I guess if a trick works, I shouldn’t complain too loudly.