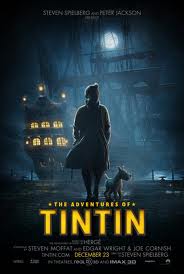 Directed by Steven Spielberg
Written by Steven Moffat, Edgar Wright and Joe Cornish, based on the comics by Hergé.

I think my experience with this film speaks directly to my undeniable and unavoidably lofty expectations.

I’m a longtime reader of the Tintin comics, since I was a child. This summer I reread almost the entire set—my copy of King Ottokar’s Sceptre remains at large—and was reminded of the wonderful combination of  international adventure stories and broad slapstick. There’s something both wholesome and spirit-raising about those stories—cultural insensitivity and political incorrectness not withstanding—as well as inspiring: I found myself enjoying writer-artist Hergé’s later books, including Flight 714 and Tintin And The Picaros, more than the earlier. After decades of doing them, he just got better and better.

And, of course, when I heard Spielberg and producer Peter Jackson were teaming up to adapt the comics (using high-tech motion capture animation), I was pretty excited. These two creative giants know their way around this kind of material like nobody’s business. The story I’ve heard is that Spielberg was unacquainted with Tintin until European critics compared his Raiders of the Lost Ark to the comics, after which the American filmmaker secured the rights and planned to make a live action Tintin movie. Hergé himself is said to have suggested Spielberg was the filmmaker best-suited to bring Tintin to the big screen.

So, now that it’s finally here, it should have been a blast, right? Unfortunately, no. With more than 30 years of experience of the source material, combined with sincere faith in the astonishing skill of the filmmakers, I left the cinema feeling a little deflated.

That’s not to say there aren’t a number of things to recommend the film. It starts with a very clever nod to the comics—that I won’t spoil for anyone intending on seeing it—before immediately launching into the plot. Our hero Tintin (voiced by Jamie Bell) is a “boy reporter,” a fearless and already quite well-renowned journalist (who might be, what, 21 years old?) never found without his loyal terrier, Snowy. At an outdoor market in an unnamed European town he stumbles across a model of a 17th century, three-masted warship, which holds the first clue to a treasure lost a sea. A group of men want that clue and will do anything to have it. But tenacious Tintin is on the case, leading him to a perpetually soused sea-captain Archibald Haddock (Andy Serkis), a descendant of the captain of the original ship. They find their way to North Africa—including an incredible chase sequence through a Moroccan village—and get into all sorts of trouble trying to lay their hands on three scrolls from three identical model ships, which together will reveal the location of the treasure.

The story is based on three Tintin comics, The Secret of the Unicorn and its sequel, Red Rackham’s Treasure, as well as part of The Crab With The Golden Claws, which introduced Haddock. Credit to filmmakers Wright (Scott Pilgrim) and Cornish (Attack The Block) along with British TV veteran Moffat, for incorporating the various threads of the different stories into a coherent plot, with nods to previous Tintin books as well.

But it isn’t the plot that’s the problem. It’s the execution.

What’s key to the books is a mystery to be solved. Sure, that’s part of the movie too, but the pacing of the books allows for moments of slapstick humour and levity as well as quieter moments when we get a chance to really know the characters, both the heroes and the hissable villains. And conversation, great bits of misunderstanding and wordplay that are both sharp and funny. The relentless pace of The Adventures of Tintin is so ceaseless as to give all the characters a short shrift. Breathless is the word: the characters barely have a chance to speak to each other before the next action sequence kicks in. We get that Haddock has a problem with alcohol, but beyond that we hardly know the guy. Tintin is better defined by his unerring ambition, which is something since in the comics he often comes off as a cypher. But care much about them, I did not.

And while I was momentarily thrilled to see they managed to find a way to fit in Bianca Castafiore, the opera singer who tortures Haddock so singularly and hilariously in the comics, I was then disappointed that she and Haddock don’t even get to have a conversation.

Then the action climax, involving gigantic dockyard cranes, felt like it had so little to do with what I love about Tintin or admire about Spielberg’s work that I was left with a sour taste in my mouth.

People have been comparing the film generously to Spielberg’s best, including Raiders, but I didn’t find it even in the same league. It is more fulfilling than more recent big-entertainment Spielberg,  Indiana Jones and the Kingdom of the Crystal Skull, mind you, which I thought started well before the jungle, monkeys and bad CGI seemed to swallow the movie up entirely.

My final criticism is laid upon the choice to do this movie through motion capture. I get why the freedom of the technology is so appealing to filmmakers, but the results have yet to really impress me. Here I was distracted not so much by what they call The Uncanny Valley—the way the animation can be so real, yet so unreal, it’s creepy—but by the grotesque noses and bulbous faces. The movie moves well, and the backgrounds, environments and swooping “camerawork” are impressive, but I felt the whole endeavour lacked a sense of jeopardy for being, for better or for worse, a cartoon.

But maybe there just isn’t any pleasing me on this one: Tintin will never be better than he was between the pages of Hergé’s 50+ years of comics. And Spielberg may never top his Raiders, his Jaws or his Jurassic Park.