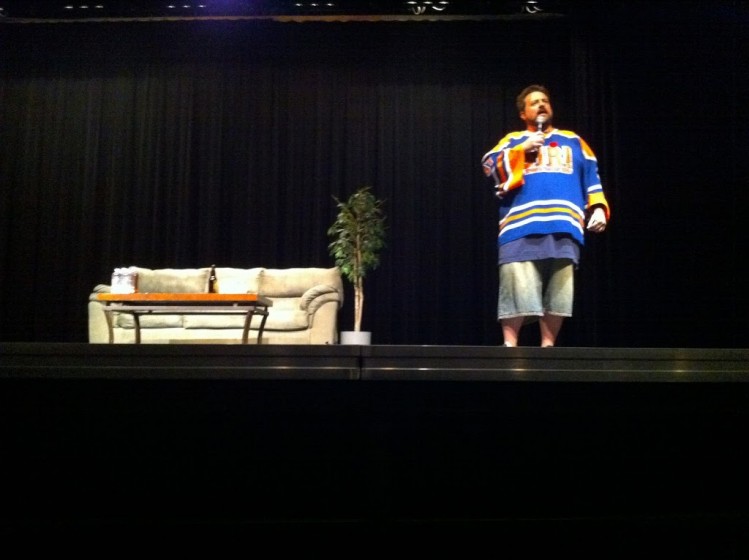 First off, he’s nowhere near as fat as some airlines would lead one to believe.

I mean, seriously. The size of some people they squeeze into those seats, and they had a problem with Smith? He was no bigger than your average Nova Scotian man, many of whom are his fans. He has a lot of beefy fans. Not that I’m some svelte dude, but there were a lot of men in the crowd who looked like they eat steaks and fries on a regular basis.

And, I didn’t expect him to be such a motivational speaker. Not that there’s anything wrong with going the Tony Robbins route, but I was surprised when answering a question from a guy about The Avengers movie(s), Smith veered off into a story about the responsibility of being an artist, and how once he directed films and then he started to “host” films. That is, he’d take on projects where he had a lot of help making the film, where his heart wasn’t in it the way it was in his first three or four features. And doing that he learned that he wasn’t being true to the 21-year-old inside him. Hence the redirection into podcasting, which he’s built into a modest online empire called Smodcast Internet Radio, a website that hosts a number of podcasts, not all featuring him.

He told a story about the last meal he had with his father, and how that night his father died screaming—an unvarnished fact—and how if we’re all headed to similar mortal conclusions, then there is absolutely no reason not to chase your muse. (No, not your Mewes.) Whatever your inspiration. He said it’s so easy to criticize an artist, but much harder to give them props. And how creativity is all a continuum, and how it’s in all of us to put stuff out in the world that can inspire others.

It was pretty damn inspiring. And as someone who’s done a little criticizing in my time, right here on this screen, I squirmed in my seat.

In 2 hours 45 minutes he was onstage, he did belabour some of his stories a little, I thought. But his gift for telling a story well and for finding a lot of humour in his circumstances—whether his self-admitted limitations as a film director or his discomfort with his size—was unerring. He’s also great at the deft use of vulgarity. He did not hesitate to illustrate the joy of free speech by describing an intimate act with his wife, one most wouldn’t share with a room full of strangers.

He answered questions about the weed he likes, he referenced Ricky and Bubbles of Trailer Park Boys, how he once met Ellen Page. And he talked about his movies, including the hockey movie Hit Somebody, to be released in two parts next year. It’s to be his swan song as a director, he says. He indulged a fan who sang “O Canada” while incorporating lyrics about Liam Neeson and his prodigious tackle.

And as he said his goodbyes, I was left wanting more. He might not admit it, but there’s some clever showbiz in all of this. And that’s not a dig, it’s just a recognition of the craft. He’s right though: in an age of spin, sheer honesty is enormously compelling.

His final anecdote was about the Westboro Baptist Church, the notorious Christian group that protests at funerals and has nasty things to say about gay people—the kind of thing that would get them charged with hate speech in this country. But Smith makes a pretty convincing case for the United States’ free speech laws, and talked about how much he enjoyed his own counter-protests outside cinemas showing his film Red State where the Baptists would show up.

Most of all, from my lucky seat in the front row, I was reminded how damn personable Smith is. He’s incredibly likable. You want to hang out with the guy. Fortunately, that’s an illusion he provides to all in his regular podcasts. We can enjoy his company even when he’s not on stage.

I do wonder, though, once a few years have gone by and he hasn’t made a film, he’s out of that line of work, what will he talk about? Verbal storytelling is a great art, and more power to him for grabbing it with both hands, but I have a feeling his battery for filmmaking will recharge and somewhere down the road he’ll find a story to tell with the moving image again, not just with words.

And, for the record, I really liked Zack and Miri.