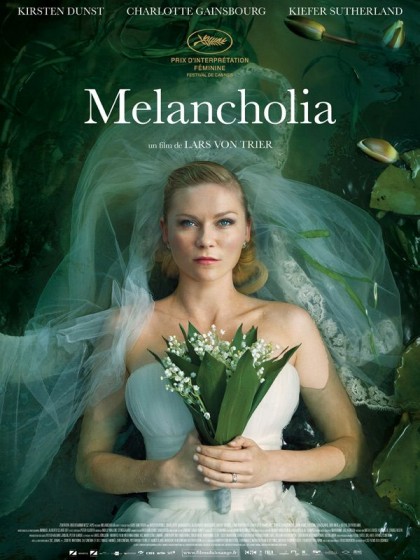 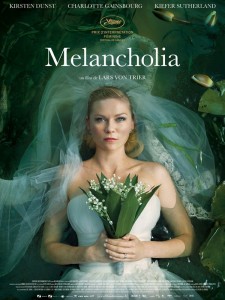 I’ve said it before and will again: von Trier is a provocateur. That he’s from Denmark, my mother’s homeland, the most prominent director to emerge from 1995’s Dogma movement—a rigorous aesthetic that he’s long since shirked—makes his films interesting to me, but I rarely want to see them again. And a big part of my criteria for quality film is connected to rewatchability. But then sometimes his work, like Dancer in the Dark, actually makes me angry. More recently, I found Antichrist to be both hypnotic, interesting and a little repulsive. I liked the tone of it, mostly.

And an appreciation of tone is what I took away from Melancholia. As an exploration of depression, I found it engaging, and for the universe within the frame that von Trier creates.

It’s a story told in two parts, prefaced by a gorgeous montage of images, characters moving in slowmo, planets colliding, all in front of a score by Wagner. Tonally, it’s is a world away, but in terms of visual storytelling ambition, Melancholia resembles no 2011 film so much as The Tree of Life.

The first hour of the film takes place at a wedding between Justine (Kirsten Dunst) and Michael (Alexander Skarsgaard). The couple is very late, since their stretch limo couldn’t get down the lane to the enormous mansion where the reception is taking place. The mansion is owned by Justine’s brother-in-law, John (Kiefer Sutherland) and her sister, Claire (Charlotte Gainsbourg) is MCing the event. Both are giving Justine a lot of grief over the expense and their tardiness, but it becomes clear that Justine is depressed and is struggling with her condition. It doesn’t help that her mother Gaby (Charlotte Rampling) and father Dexter (John Hurt) hate each other, and Gaby even hates the institution of marriage, a point she makes explicit. Oh, and Justine’s ad agency boss, played by the elder Skarsgaard, Stellan, is pressuring her to come up with a tag line for an image during the reception. The only one really offering her any support is the groom, though he seems painfully out of his depth, not really knowing how to deal with his bride and her problems.

This is Grade A melodrama, which I have time for. But I think there is a problem in the casting. Could Gainsbourg and Dunst be physically more dissimilar, to each other as well as their parents? I get that they could have been raised in different countries as the product of a divorce, hence the different accents, but its hard to believe they’re at all related. Not to mention their disposition is so entirely distinct from each other.

That said, this is some of Dunst’s best acting to date. It’s sometimes hard to see a child actor grow into adult roles. Directors and casting agents have trouble with it, too. But here Dunst, at age 28, kills it in an adult role with adult emotions. I’ve read that von Trier wrote the part based on his own experience with depression, and Dunst is able to convey the crippling paralysis of the disease in her eyes and movements. I totally bought it.

The second hour is more Claire’s story; following the catastrophic wedding Claire takes care of Justine in the big house. Meanwhile, John is observing a rogue planet passing close to earth. It’s apparent that this other planet will collide with earth, and as Claire falls apart when faced with the reality of the end of the world, Justine finds a strange calmness about it all.

I’m not sure what von Trier is trying to say here. Maybe just this: terrible, irrevocable events are faced with more strength by people who’ve lived them already in their minds? Or the dread of the end of everything is what depression is like?

Though this hardly feels like it belongs in the genre of apocalypse movies since it seems to be about other things, it certainly qualifies. And the visuals in tandem with the brooding, dramatic score provides an experience both unnerving and soothing all at once. Melancholia is overlong and in places heavy-handed, but unique, moving and certainly not repulsive, so full points to the Danish enfant terrible for the restraint. Maybe even call it maturity.