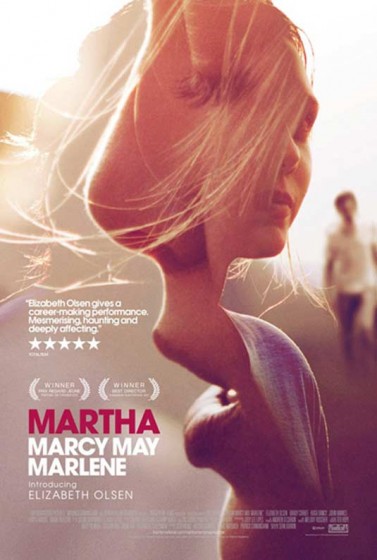 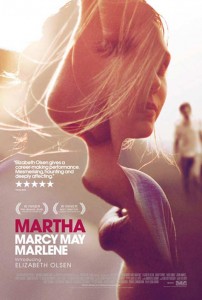 Written and directed by Sean Durkin

Marcy May (Elizabeth Olsen) is one of many young people working at a farm in what looks like upstate New York. We notice it’s a bit weird from the get-go: the women prepare the meals and sit outside the dining room while the men eat first. Then the women get to eat. The women are all slim, wearing unfussy clothes and sun dresses. Marcy May leaves, runs into the woods, followed by a man and some of the women. She’s found later eating at a diner. Though she’s not forced to go back, you certainly get a sense of her fear.

She’s picked up by her sister, Lucy (Sarah Paulson), who knows her as Martha. Lucy takes Martha to a large cottage in Connecticut that she shares with her husband, Ted (Hugh Dancy). They haven’t seen Martha for two years and she’s not saying much about what she’s been through. But we find out all about that as an intricate flashback structure is imposed, delicately overlapping present and past.

We get to experience Marcy May’s gradual indoctrination into a cult at the farm, led by the Charles Manson-esque Patrick (John Hawkes), a creepy sexual predator who is able to inspire astonishing fidelity from his followers, who willingly sacrifice their freedom and identity. In the present, Martha is finding it difficult integrating with her sister and brother-in-law, their values and manners clash with her programming.

Martha struggles to maintain a grasp on the current reality as she flips back to days on the farm. As scenes bleed into a flashback, the transitions are so subtle the audience gets to approximate Martha’s confusion. From moment to moment we sometimes don’t know where we are. By the third act it becomes more fragmented. We’re getting things from Martha’s perspective and then from outside, watching her become more paranoid and seeing the depth of the damage. Or, maybe not. Maybe they’re still out to get her.

Sean Durkin, a relative neophyte to filmmaking, has brought out a compelling performance from his lead performer riding a buzz that precedes the picture, and I can confirm it’s the performance that really elevates it. Previous to this Elizabeth Olsen was an unknown, though it’s now common knowledge that she is the younger sister of former child-actors, cosmetic and brand queens Mary-Kate and Ashley. Elizabeth has her sisters’ wheat-coloured features though maybe a little less glossy. She exudes a casual sensuality but it’s her ability to convey a wide-eyed curiosity cut with grim intelligence that stays with you through the film’s running time, and after.

The directorial and editorial touches mentioned earlier really impress, though the picture does fall into some of the American independent film cliches so beloved by Sundance, from the eschewing of a soundtrack—while the tension of discordant buzzes in certain scenes is well-utilized—to the presumption that hand-held camerawork equates some kind of truth, or at least gritty realism. And the conclusion is more than pointedly ambiguous, it’s borrowed from any number of paranoid thrillers  and doesn’t quite mesh with the psychological discomfort so well portrayed through the rest of the film.