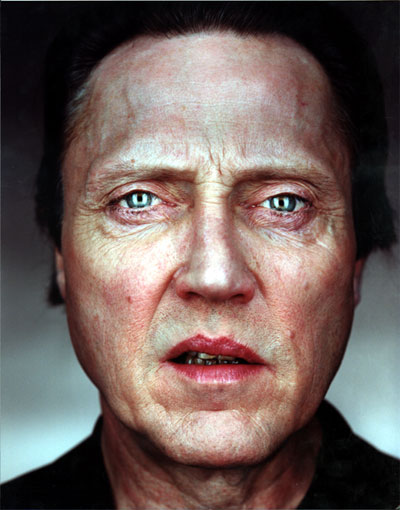 image by Martin Schoeller
Christopher Walken is one of those actors who in his older age is defined by his oddness, by all the people who do impressions of him. Kevin Spacey, Kevin Pollack and Jay Mohr have gotten a lot of mileage on impersonating the guy. Just head over to YouTube if you don’t believe me.

It seems inevitable. All the actors I’ve really admired eventually become parodies of themselves, larger-than-life versions of their most famous roles. Nicholson, DeNiro, Pacino and Walken, they’ve all fallen into this trap, even as we yearn for them to continue to work at the level of their best material. That’s a lot of expectation of an artist. Of course, how much an actor’s image relates to the reality of the person is obviously fractional, but that’s what we get out here in the world.

Best way to approach them is to look at the work. Clearly it’s what Walken loves, given how often he’s shown up in front of the camera in movies that seem, well, not worthy of his peculiar genius, like Balls of Fire.

I haven’t seen all his movies, but I’ve seen a lot of the good ones. Here’s a look at my favourite of Walken’s roles, chronologically ordered.

The Anderson Tapes (1971)
“The Kid”
I recently discovered this film on DVD. It’s one I had to order because it lives in that great netherworld of obscure movies, completely unavailable to be seen on TV and unlikely to turn up at your local video emporium. This is where Amazon is a treasure. Sean Connery is the star of the thing, a professional thief who gets out of prison with a few of his buddies and immediately plans to rip off the Manhattan condo building where his girlfriend, Dyan Cannon, lives. Meanwhile the cops are onto the whole plan through surveillance. It’s got a lot of pleasures of a 1970s New York movie in the locations and economical direction by the great Sidney Lumet, but it’s not a great movie. It’s Walken’s first feature film role as one of Connery’s ex-con buddies. He’s not without charisma, though he has kind of a shark-like vibe.

The Deer Hunter (1978)
“Nick”
This was the role that earned Walken his Oscar, for Best Supporting Actor. In a great ensemble he’s the odd one out, more haunted somehow. What everyone remembers, of course, are the Russian Roulette scenes.

The Dogs of War (1981)
“Jamie Shannon”
In this British film, Walken is a mercenary. I loved the picture when I was a kid, though watching it again recently I found the pacing a little slack. But I still enjoy the world of the movie, how unglamorous it seems to be a soldier for hire, and great support from Tom Berenger and Paul “Belloq” Freeman. The scene towards the end where Walken shoots his way into the presidential palace, all green-eyed fury and flared nostrils, is something to see. And his moment of exhaustion at the wheel of the jeep directly following that I also recall.

The Dead Zone (1983)
“Johnny Smith”
From the Stephen King novel, this Cronenberg picture is probably my favourite film of Walken’s. He has made fun of it himself on Saturday Night Live, with his Trivial Psychic shtick, but it’s still a dark and gorgeously simple movie, about a guy who emerges from a coma with the ability to see the future, and is forced to make a terrible choice when he sees the apocalypse. Walken has never been more sad and sympathetic as he is here, having missed his chance at happiness with the woman he loves. Martin Sheen plays a great sleazy politician in the film, a nice comparison role to his President Bartlett on The West Wing years later.

At Close Range (1986)
“Brad Whitewood Sr.”
It’s in this film that Walken seems at his most dangerous, going toe-to-toe in ferocity with the young Sean and Chris Penn, here playing his sons.

Communion (1989)
“Whitley Strieber”
Based on Strieber’s account of being abducted by aliens, this is a damn creepy movie. Walken actually seems more normal here contrasting with the very strange things that happen to his character.

King of New York (1990)
“Frank White”
White gets out of jail, still the top of the gangster heap, except New York as become New Jack City. He starts afresh, becoming something of a cocaine-dealing Robin Hood. Check out his costars Lawrence Fishburne, David Carsuo, Wesley Snipes and Steve Buscemi, all of whom come across as beta dogs opposite his alpha. Walken has said he always tries to work a little bit of dancing into his roles, as is clear in this scene:

True Romance (1993)
“Vincenzo Coccotti”
His appearance here, as in Pulp Fiction, is but a cameo, but it’s such an amazing scene, written by Quentin Tarantino, it seems to lay waste to most of what comes before and goes after. It’s a gradual two-hander, alongside the great Dennis Hopper, who does most of the talking.

The Prophesy (1995)
“Gabriel”
In some ways I think this role is the peak of Walken’s bizarre appeal, when he finally gets to play an avenging angel, Gabriel. He’s frightening in about a dozen ways, especially in the scenes where he acts opposite children. Also in a great cameo role, Viggo Mortensen as Lucifer, as well as good work from Virginia Madsen, Eric Stoltz and Elias Koteas. There were at least two sequels that Walken appeared in, though they remain unseen by me.

And, for those readers who’d like to look further, here are more of Walken’s films where his work is remarkable: Pennies From Heaven, The Milagro Beanfield War, The Comfort of Strangers, Biloxi Blues, Pulp Fiction, Suicide Kings, Catch Me If You Can, and Man on Fire.