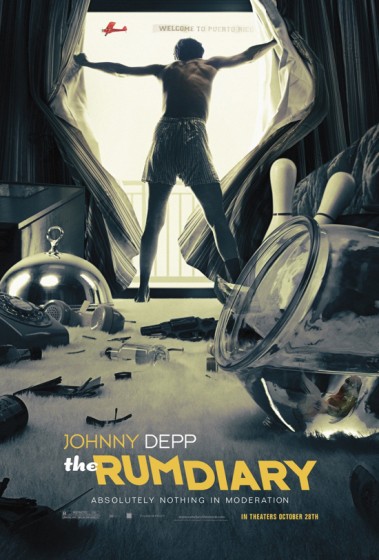 This is telling: two posters from The Rum Diary, the brand new movie starring Johnny Depp as Paul Kemp, the hero of Hunter S. Thompson’s Puerto Rico-set novel. There’s this one 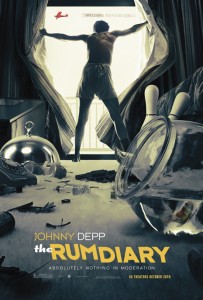 which hides Depp but plays up hotel-room carnage. Playing to fans of The Hangover, maybe? And then there’s this one 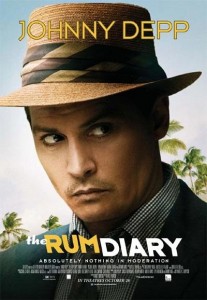 that’s all Johnny, because you can still try to sell a movie with its star, you know. Such little imagination, it’s amazing that Hollywood marketers manage to keep their jobs at all. It’s also telling that the people who are trying to get you to see this movie have really differing ideas of what will work. And I should cut them some slack there, since it’s nowhere near factory-tooled formula.

Based on Thompson’s novel that went long unpublished, the film has gone long unreleased, maybe having to do with concerns over its marketing. Like the novel, it’s a meandering mess, not entirely fully realized, maybe (Thompson wrote the book years before he found success as a journalist writing for Rolling Stone magazine), but still very likable.

Kemp arrives in San Juan, a town already an American tourist destination in 1960, when it’s set. He’s a drinker, and his resume is fabricated, but beyond that we don’t know much about the guy. We get a bit of the Depp attitude that is very much a part of his portrayals lately, and a dose or two of that cowardly side, which he used so winningly in Sleepy Hollow. Here he seems to be channeling some of director Robinson’s greatest creation, Withnail, from his 1986 masterpiece Withnail & I. And that’s good to see.

Going to work at a failing local newspaper staffed by layabouts and alcoholics, Kemp writes horoscopes and stories about tourists bowling, but also sees the dichotomy on the island, the impoverished locals being screwed by hotel owners, land-grabbers, the big American money coming in and making the place their own. And in this, The Rum Diary seems most in tune with the times, as 99:1 is a ratio we’re seeing a lot of lately, the haves and the have-nots.

Kemp certainly seems beguiled by the money. Hal Sanderson (Aaron Eckhart) is a former employee of the paper who now works as a public relations man for other interests and dangles a lot of opportunity in front of Kemp. That and his girlfriend, Chenault (Amber Heard), who Kemp is immediately beguiled by. One of the things this movie really has going for it is a dynamite cast, all sparkling no matter how limited their screentime.

But Kemp doesn’t show a lot of initiative. He’s a frustrated novelist who really loves his drink, and his colleagues at the paper, Sala (Michael Rispoli) and Moburg (Giovanni Ribisi) don’t tend to be great influences, what with antagonizing the locals, getting thrown in jail, betting on cockfights and experimenting with acid. But somewhere along the way, Kemp manages to get his mojo working, to find his fighting spirit, and words come out of Depp’s mouth that sound very much like the Hunter S. Thompson who troubled the men in power in the 1970s. Those words are good to hear.

Of course, Depp has channeled Thompson before, in Fear & Loathing in Las Vegas, so is a natural for this material. The tone of the movie he’s in, however, is uneven. There’s an overuse of incidental music that makes it feel like more of a farce than it actually is. And slapstick-y scenes of recreational drug use and a visit to a witch-doctor might illicit a chuckle or two, but don’t do much to forward the momentum. Also, a key character gets lost in a crowd at a key moment, only to turn up later all upset, and we never really understand what happened there. And finally, the story doesn’t actually resolve in any dramatically satisfying way, it just stops.

But despite the fragmented plot and tonal irregularities, The Rum Diary is a fun trip. Accidentally relevant and purposefully nostalgic maybe, but full of incidental pleasures.