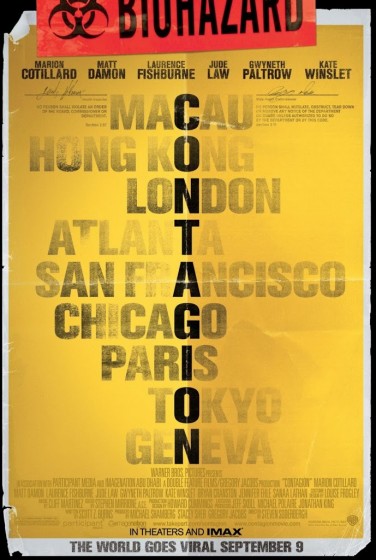 I’ve read that Soderbergh’s intent with this virus thriller was to make a film akin to producer/director Irwin Allen’s disaster movies of the 1970s, which included The Poseidon Adventure, The Towering Inferno and The Swarm. The template of those pictures was to have a number of recognizable stars in small roles, with the spectacle of the disaster the real star. In that, Soderbergh has succeeded with Contagion, and has added his own special ingredient to the mix; a clinical, believable horror that will ensure you don’t want to touch anything, or anybody, when you leave the cinema.

We meet a number of people, starting with Beth Emhoff (Gwyneth Paltrow), a woman returning to her midwestern home from a Hong Kong business trip. She had a layover in Chicago, where she may have had a liaison with a lover before returning home to her husband Mitch (Matt Damon). The next day she starts getting sick, has a seizure and is rushed to the hospital. Other people she was in contact with start to get sick. Dr Ellis Cheever (Lawrence Fishburne) is a big wheel at US Centre for Disease Control and Prevention in Atlanta, who gets the word from the Department of Homeland Security that a bioweapon may have been released. Cheever sends epidemic expert Dr. Erin Mears (Kate Winslet) to investigate on the ground. Dr. Leonore Orantes (Marion Cotillard) is an epidemiologist from the World Health Organization who heads to Hong Kong to trace the source of the virus, while Dr. Ally Hextall (Jennifer Ehle) is a scientist working for the CDC looking to create a vaccine.

And all their efforts seem to be for naught in the first act, anyway. This virus marches through people like a biblical plague, and what the film very compellingly depicts is what such a thing might actually look like if it happened. The panic, the bodies piling up in mass graves, the mobs storming pharmacies looking for herbal remedies, the military blockades, it’s all frighteningly plausible. In Soderbergh’s unflinching digital eye, swaddled in a great Cliff Martinez score, we’re compelled to view a possible conclusion to the overpopulating human race. Jude Law plays Alan Krumwiede, an activist blogger taking to task the authorities and propagating paranoia, earning huge audiences as a result.

Everyone is great in this, performance-wise. The cast is sprawling, with more key roles for recognizable mugs including John Hawkes, Elliot Gould and Bryan Cranston. But, just like Allen’s movies, it’s the disaster that stokes drama by projecting upon its audience, not the human stories. People die, of course, but you don’t really get invested in their lives so the collateral of their damage isn’t moving.

What is most successful is the imagining of a world where this could very easily happen any day now. And the impetus of fear, how we might behave, is especially chilling.