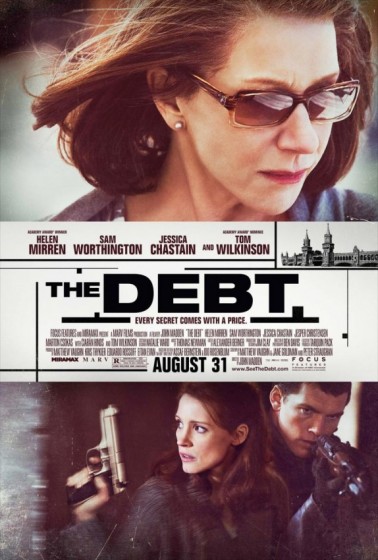 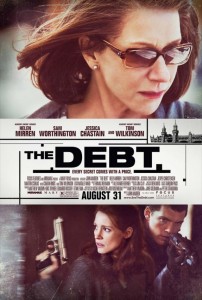 Directed by John Madden
Written by Matthew Vaughn, Jane Goldman and Peter Straughan,
based on the film Ha-Hov by Assaf Bernstein and Ido Rosenblum

Rachel Singer (Helen Mirren), ex-husband Stephan Gold (Tom Wilkinson) and ex-pat David Peretz (Ciaran Hinds) are national heroes in their homeland of Israel. In the mid-1960s they were Mossad agents, assigned to East Berlin on a kidnap assignment: capture and deliver to West Berlin a man named Dieter Vogel (Jesper Christensen), better known as the Surgeon of Birkenau, a doctor who performed hideous experiments on Jews at concentration camps.

But there’s a secret the three former agents are carrying, something about their mission, something that went wrong.

So we flash back to Berlin, where Rachel (Jessica Chastain), Stephan (Marton Csokas) and David (Sam Worthington) are planning the deal. Rachel visits Vogel—now a respected medical professional—on the pretense of concern over her reproductive health. Meanwhile, these three secret agents are training and getting to know each other in their apartment, and even in local bars, waiting for the opportunity to grab Vogel, letting certain romantic inclinations get the better of them. Things don’t go entirely as planned, and they wind up having to hold Vogel at the apartment. While they keep him locked up, he starts messing with their heads.

Having seen the trailer for The Debt, and read a few glowing reviews, I was hoping for something maybe approaching the level of Munich. Unfortunately, this doesn’t even come close. Where Spielberg’s excellent thriller is a modern classic, something that supersedes the spy thriller genre, The Debt is like an airport read, offering a few genuinely exciting moments, but it gets bogged down in implausibilities and we never really feel emotionally engaged in the characters’ lives.

There were plenty of moments here where it could have been great, but the flaws are impossible to ignore. The secret shared by the three agents is supposed to be crippling to their psyches, doing lasting damage through the years. I found that to be a bit of a stretch, given the reasons for keeping the secret are very reasonable. The greater good of the country and all that. These people are trained soldiers, the best of their kind. Where the cost of Avner’s work in Munich brings the audience aboard, here it’s hard to relate.

Also, when it should have been gripping, such as when they have captured Vogel and the old monster is playing on their anxieties, it was clunky. He was obvious and pedestrian when he could have been much nastier and more cunning.

And finally, a conclusion that has one character going on an international assassination mission after 30 years of retirement took the film all beyond any likelihood. We see the charatcer carefully picking locks, uncovering information and eventually making a decision that goes against everything they’d done with their life to date, actively revealing the secret, despite very good reasons not to.

I just didn’t buy any of that. OK, maybe the secret was tough to carry, I just don’t think the screenwriters did enough to convince the audience that a lie kept for so long would be worth owning up to.

The casting of the elder agents is dynamite, mind you, and The Debt is nicely shot, using locations in Tel Aviv and Budapest to give it a strong sense of place. Chastain really shines, but unfortunately the weak link in the younger actors is Sam Worthington, who can’t provide the charisma nor the subtlety that the character requires. I had a similar complaint of him in Last Night. He’s believably physical, but I’ve yet to see him be as compelling as he was in either Avatar or Terminator: Salvation. And it is a bit of a leap to think Worthington turned into Ciaran Hinds, just sayin’.