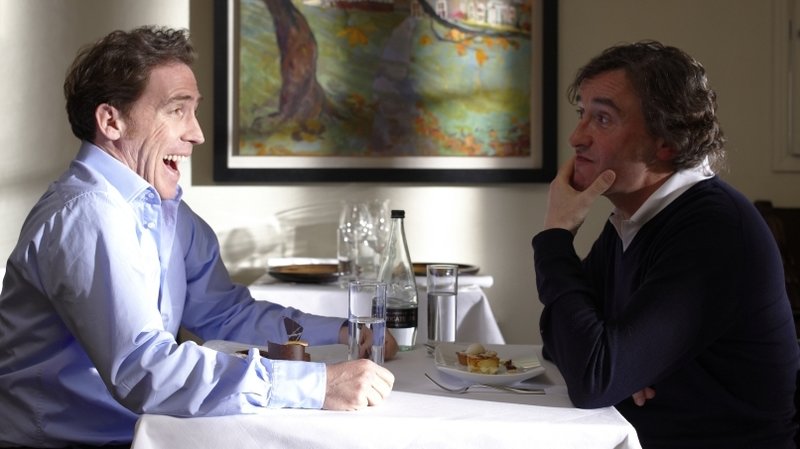 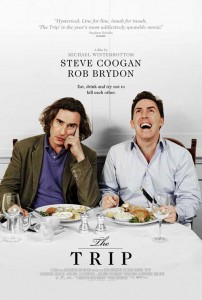 Weirdly, this film has no credited writer. Maybe not so weird. It’s very possible that the picture was entirely improvised by the two leads, Rob Brydon and Steve Coogan, both of whom were in Winterbottom’s Tristram Shandy: A Cock and Bull Story.

Something else people should know: The film is an edited version of a six episode TV series. So if it feels episodic, that has a lot to do with it.

Comedic actor Steve Coogan hired to tour fine dining restaurants in the north of England and write about his experiences for the UK newspaper The Observer. He needs a companion for this trip, and was hoping to take his on-again-off-again girlfriend Mischa (Margo Stilley), but she’s run off to New York. So, a bit depressed, Coogan invites Brydon along, someone he’s worked with in the past, someone he tolerates rather than actually likes.

Off they go in Coogan’s Range Rover, both men are playing obviously exaggerated versions of themselves, riffing off each other. They’re both talented mimics, and much humour is mined from their battling Michael Caine impersonations. Brydon is especially good at impersonating British celebrities and Hollywood actors.

There’s an underlying anxiety about men entering a certain age here that’s telling, something Coogan feels acutely and Brydon hardly at all. And if Brydon comes off as a little thick, keen to be the centre of attention in pretty much every situation, he doesn’t entirely get how annoying he is to Coogan. Which makes Coogan even more angry.

There’s something so wonderfully British about this movie. I can’t imagine, say, Jim Carrey and Tim Allen doing this across Northern California. The wonderfully silly, ironic and self-deprecating quality of British comics on display here is a treat. Just listening them to talk is wildly entertaining. There’s warmth here, and as it swings back around to the south of England in the final act you start to see there is a real friendship between these two fellows, even if Coogan refuses to acknowledge it.