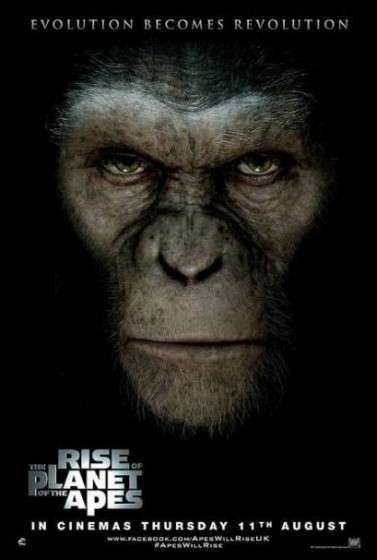 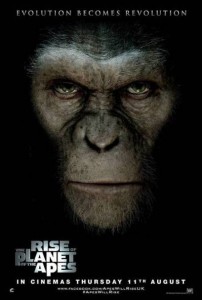 Hello faithful reader! I went to Rise of the Planet of the Apes on Friday evening, and my capsule review is on The Coast site. Go check it out and then come back here.

Have you done that? Cool. You’ll see that I liked the movie—for the most part—as an engaging summer b-movie romp reigniting a happily dormant franchise. There isn’t much reason for this movie to exist, but I am glad it does, mostly because it sets up a sequel that promises to be even more fun.

My biggest problem with ROTPOTA is with the special effects that created the central chimpanzee, Caesar. I saw the movie with Flaw in the Iris contributor and movie Ape expert Dave Howlett, who really liked ROTPOTA and shares none of my reservations about the CGI simian. I went over to Rotten Tomatoes to take a look at the ratings for ROTPOTA. More than 80 percent fresh, eh? It looks like I stand alone on this one. If I provided marks for movies I’d give it a passing grade, but dock it seriously for tossing away what made the previous movies work so well.

So, I thought it worthwhile to explain/justify why the CGI didn’t work for me.

First off, I can’t deny that Caesar is a great character. The facial expressions created by the motion-capture technology, channeling the performance given by British actor Andy Serkis—known for his work as Gollum in Lord of the Rings and as the titular ape in Peter Jackson’s King Kong—are very convincing. All of this makes the character of Caesar work, in terms of him serving the story.

But he isn’t REAL. The way the CGI is used in ROTPOTA, I didn’t once buy into the idea that Caesar was an actual living being in that story. He is animation, as engaging in the world depicted as, say, Roger Rabbit would have been. And I’m supposed to care about him as if he was flesh and blood? 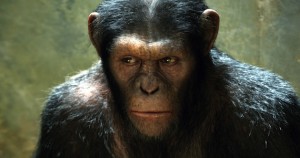 Now, I was able to make more of a leap to believe Gollum was real. That’s because Gollum is a magical movie character. I can accept that he looks a little odd and animated and two-dimensional because he lives in Middle Earth. I also bought into Jackson’s King Kong. Maybe because most of what we saw of Kong was middle and wide shots, or maybe because with Kong they weren’t trying to suggest some kind of human-like level of smarts through facial expressions, but whatever they did in that movie, I was OK with.

The fact that the story of ROTPOTA takes place in such a recognizable reality is a big part of the problem, I think.

It’s quite clearly San Francisco in the now or near future. If this was a complete fantasy world, I’d have been more forgiving. In Tron, for example, I was OK with rubbery de-aged Jeff Bridges when he was Clu in the computer since that was a simulated reality. I wished it looked better, but I went along with the conceit. When he was de-aged rubber-face in the real world during the introductory scenes, it looked as weird as Caesar, and I didn’t buy it.

So, I’m not besmirching Serkis or the character, I just don’t believe the special effects. A decade ago Tim Burton’s reboot of Planet of the Apes used actors in rubber masks, very much like the original movies. 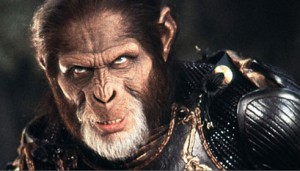 Though the movie itself was ill-advised, I believed those characters existed in the onscreen space. Tim Roth and Helena Bonham Carter were amazing! No, I didn’t really think they were actually a super-intelligent race of apes, but I was engaged by them because they moved and breathed and the actors’ performances came through the eyes. Caesar’s eyes are emotive, but false. The way the light falls on his face is false. He’s a cartoon.

Check this out. Here’s a four-minute clip from the film, introduced by Mr Serkis himself. In this scene Caesar is acting in protection of his master’s father, Charles (played by John Lithgow) who has Alzheimer’s. Charles mistakenly gets into the car belonging to his obnoxious neighbour (David Hewlett). The neighbour lashes out at Charles. Caesar intervenes.

Now, the action stuff, everything in medium shot, is pretty damn exciting. But Ceasar’s face in close-up doesn’t work for me. Look at the shot from 3:40-3:55 when we see Caesar looking over Charles’ shoulder at the gathered humans. He’s sad and remorseful, it’s easy to see that. But he ALSO DOESN’T EXIST. That’s easy to see, too. It’s a special effect.
For ROTPOTA I would have preferred a mix of CGI and actors as the apes, maybe even puppets for the baby chimp. Some combination to root it in the reality of the film. Where we can believe that the creatures actually exist, maybe not real chimps, but also not just rendered creations with no actual weight in the scene.

I think it’s a testament to how fun ROTPOTA is that my inability to suspend my disbelief around the FX didn’t ruin the experience for me. I want to reiterate that point. The action sequences were dynamite, especially in the last act. And, funnily enough, I found the CGI orangutan and the gorillas to be totally convincing. But they also had fewer close-ups. They weren’t called to convey anything more than their ape-ness in their faces.

I’d be interested in hearing from anyone on this subject. Are rubber masks and make-up better for  verisimilitude in these kinds of movies, or am I just behind the times and need to get my eyes and expectations up to speed with what CGI is? Feel free to comment. 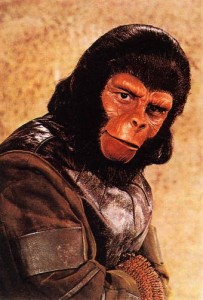