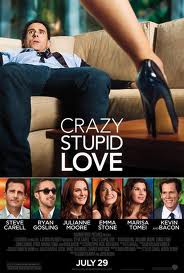 Oh, I had high hopes for Crazy, Stupid, Love. The directors’ previous work includes Bad Santa and I Love You Phillip Morris, both genre-pushing in their own ways. And then there’s this cast, which assembled for a romantic comedy would tend to suggest a superior script. There’s no one hotter in Hollywood right now than Ryan Gosling and Emma Stone. Their agents forward them the best scripts out there, and they can choose what they want.

It is a shame that the film, while being a cut above the average romcom, which I know is very faint praise, misses being really good by cleaving towards formula at all the wrong moments.

We start with Cal (Steve Carell in milquetoast mode, rather than balls-out stupid, which seem to be his only two speeds lately), who’s heartbroken at the fact that Emily (Julianne Moore, sweet but two-dimensional), his wife of more than 20 years wants a divorce and is having an affair with a guy at work, David Lindhagen (Kevin Bacon, burying whatever vestiges of his Footloose sex-appeal as an against-stype shmo).

Cal goes to his local watering hole/meat-market, where his barside rants earn him the pity of the bar playa, Jacob (Ryan Gosling), who wears all the right clothes, has his hair cut just so, and knows just what to say to all the women to get them home with him.

Meanwhile, Jessica (Analeigh Tipton) the 17-year-old babysitting Cal’s kids, including his 13-year-old son Robbie (Jonah Bobo), has a crush on Cal, while Robbie has a crush on Jessica.

One night at the bar Jacob hits on Hannah (Emma Stone), but gets shot down, because Emma is looking for a proposal from her boring lawyer boyfriend Richard (played by Josh Groban, believe it or not). I hate it in movies when the audience knows right away a woman is wasting her time with a guy, but it takes her multiple scenes to figure it out. It makes her look stupid, and unsympathetic, when we’re so far ahead. It’s lame and unfunny writing, Dan Fogelman. And there are plenty of other barely forgivable cliches here, which I’ll get to in a second.

So, Jacob turns Cal into a ladykiller. It takes awhile, but Kate (Marisa Tomei) really helps Cal’s confidence. He uses her as the launchpad to take home (to his new apartment) all kinds of hot ladies.

And, when finally free of her misconceptions about Richard, Hannah seeks Jacob out, and they get to know each other a little better.

About those cliches: The louche casanova who deep inside is actually lost and alone, needing the love of a good woman to redeem him. Puh-leeze. One more? When a character announces, with a sigh of resignation, that what he’s just said is a cliche. His recognition of that fact doesn’t make it any less painful to hear, fellas. And there’s more. How about the preternaturally precocious tween, speaking with unearned wisdom beyond the years of even his middle-aged parents? Ugh.

And Emma Stone remains eminently watchable, even when one wishes her character had more going on. The story really isn’t that interested in her, or in Julianne Moore, which sucks, given how good they both are. The key relationship here is between Cal and Jacob, and even it isn’t as fleshed out as much as it might have been.

The film’s biggest sin is predictability. The talented performers serve up characters who do well to capture your affections, but the movie betrays a lot of that goodwill in storytelling formula. There are two smart reveals in the second and third act that I enjoyed, but not enough for the dull segments to be entirely redeemed.

Maybe my expectations going in were too high. Next to the schlocky romcoms we’ve seen in recent years, Crazy, Stupid, Love has ambition and some nice moments between the performers. But it’s almost more frustrating for that, for showing signs of being really good but not having the courage to genuinely surprise.