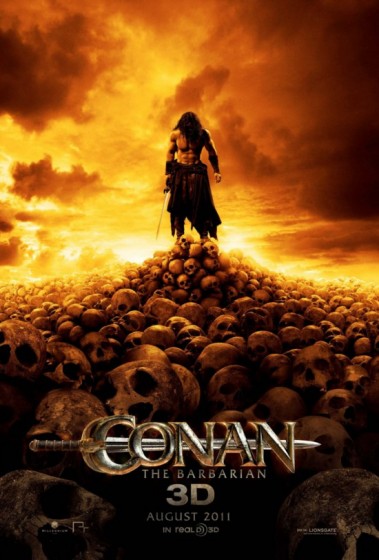 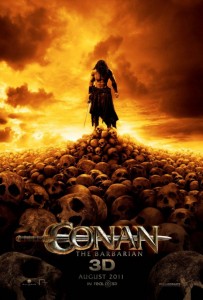 Conan The Barbarian is violent, bloody fantasy, a relentless collection of action sequences barely strung together around a revenge plot and a couple of nasty supernatural villains. It’s big, burly and not very smart. In other words, it’s everything anyone going to a Conan movie should be expecting. And in having modest ambitions, Conan succeeds.

Yes, there is a shadow of the Governator to step out from under. In his two appearances as Robert E. Howard’s Cimmerian warrior—1982’s Conan The Barbarian and 1984’s Conan The Destroyer— Arnold Schwarzenegger was becoming a star. Neither film was particularly well-received at the time, but Arnie went on to massive fame with The Terminator, Commando and Predator, and so in hindsight he’s all anyone thinks of when they think Conan on-screen. The first Conan movie has a lot going for it, including that most masculine of directors, John Milius, and a wit in the script that has aged well. “What is best in life?” Conan is asked. “To crush your enemies, see them driven before you and to hear the lamentations of their women.” That line is damn hard to top.

But early-80s Conan is also hampered by longueurs. It’s about 20 minutes longer than it needs to be, which is a fair amount of fat that could have been trimmed. That’s an advantage the new movie has over its predecessor.

The new man to strap on the loincloth and swing the sword is Jason Momoa, recently very convincing as the horselord Khal Drogo in HBO’s Game of Thrones. Though he’s lacking in Schwarzenegger’s unearthly charisma, he certainly fulfills the physical requirements of the role. His Kubrick-esque glare and ease with props (like enormous broadswords) serves him well.

And the movie around him? Well, if Conan was the movie, he would be drunk in a tavern. He’d be lurching from one fight to another, lopping off heads here and there, grabbing at the serving wenches and getting his balls handed to him other times, eventually falling apart in a chaotic mess at the end. But if you were in the corner sipping your mead and watching from a safe distance, there’d be plenty of entertainment value.

Conan is born on the battlefield, his father (a bewhiskered Ron Perlman) providing a quick cesarean to his dying mother. Young Conan (Leo Howard) is a natural warrior, holding his own when his village is overrun by nasties, even when his father is killed by Khalar Zym (Stephen Lang), who is looking for a piece to an ancient mask, the wearer of which will have all sorts of supernatural power. Zym also wants to use the mask to resurrect his dead wife, who apparently had witchy powers, though they weren’t enough to save her getting burned up in the first place. Zym’s daughter, the delightfully evil Marique (Rose McGowan), is also a spell-caster. She’s a lot of fun, and one wishes she and Conan had more time together. Since her dad treats her so badly, one thinks maybe Conan could sway her allegiance if he could get his hands on her. But unfortunately he’s too busy saving the life of virginal Tamara (Rachel Nichols) who is also important to Zym’s power play. Nichols doesn’t seem to realize what kind of movie she’s in, playing Tamara way too straight in a valley-girl accent that’s every kind of wrong. Though she’s a monk, she has some serious moves with a blade, has no problem with the odd disembowelment. However, she still requires saving at least three times, which is more than irritating, since Conan has better things to do. And the reason she’s so important for Zym’s ritual is never really explained.

And yes, as the movie lurches and sways from dismemberment to beheading, there are plenty of moments to make one groan. Less-than-convincing CGI sand warriors? A cliff-jump escape and ship waiting that weren’t there a moment before? A chaotic finale that makes little-to-no-sense? And the Terrible Tamara? Yes, all bad.

But Momoa is a lot of fun to watch, and just seeing an R-Rated Conan movie again is a treat, with all the painted backdrops, giant water serpents and raging pirates. It’s brutal and satisfying, despite the stupidity. I wished I cared more about the people onscreen, but I feel as if the blueprint was drafted this time out. The pieces are all in place, now we need someone with a bit more imagination behind the camera and at the script stage. There’s plenty of more fun to be had with Conan, now we’ve all been re-baptized in arterial spray.

One last thing: Conan The Barbarian offers the most pointless use of 3D that I’ve seen to date. It does absolutely nothing to improve the experience, it just darkens the screen enough to lose detail in the backgrounds and provide a headache. I am now starting to think a boycott of 3D is called for, especially given the gouging we take to see one of these movies. Adding $3 to $4 to a ticket for a 3D movie just adds insult to the injury.