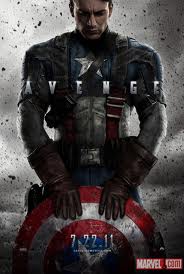 In 2011 we’ve had five big budget superhero movies, going back to January’s Green Hornet and including Thor, X-Men: First Class and Green Lantern in order of release. It’s understandable that one might be feeling a little Powers Fatigue, a condition I just invented, symptomatic of seeing too many superpowered dudes flying about in colourful costumes doing their best to save the world from gangsters, aliens, mutants and rogue Norse gods.

So, credit to Captain America: The First Avenger for injecting a bit of novelty into the genre, by virtue of it being a period superhero movie.

We start in the present day with an object discovered under arctic ice. Then we’re back to New York circa World War II, and scrawny Steve Rogers (Chris Evans, impressively shrunken by CGI) wants nothing more than to join up to fight the Nazis, but hasn’t the health or physique for the job. Even worse, his buddy, James “Bucky” Barnes (Sebastian Stan), already has his marching orders. But at the recruiting station, Dr Erskine (Stanley Tucci) notices the young man and makes sure he’s signed up for a special “super-soldier” program. You see, Erskine has invented a special formula to turn Rogers into a muscle-bound hero. (In other words, kids, take super-steroids and get pumped up!) He also gets some military training in the meantime, from Colonel Phillips (Tommy Lee Jones, reliably crusty) and Agent Peggy Carter (Hayley Atwell).

As it happens, the Nazis have their own version of a super-soldier, in mad genius Johann Schmidt (Hugo Weaving), also known as The Red Skull. Schmidt’s megalomaniac ambitions supersede even Hitler’s, along with his personal science club, Hydra.

As a creation myth there’s plenty here to enjoy in a satisfying retro vibe. The set design of New York in the ’40s is a blast, and as soon as Rogers is transformed, a Nazi spy makes certain there won’t be any more like him, leading to a great chase scene right through Brooklyn. Then there’s a segment that looks as if it’s right out of Flags of our Fathers, where the newly promoted Captain goes on a USO tour to help sell war bonds. Of course, he won’t settle for that. He needs to be on the front lines, in the action. When his Bucky is MIA, he takes a bunch of commandos to find him, busting up one of the Red Skull’s operations.

Up to this point, Captain America delivers a good time, and things we haven’t seen before from the Marvel stable of heroes. The casting is especially solid: Hugo Weaving has been enjoyably hissable since The Matrix movies, Hayley Atwell is gorgeous and great as a potential love interest and Chris Evans has shed all his snarky humour from playing Johnny Storm in The Fantastic Four and that guy from The Losers. His Steve Rogers is serious and earnest and likeable, and the costume is a lot cooler than it has any right to be. Director Joe Johnson brings a big part of what made his picture The Rocketeer so much fun to the proceedings, the feeling you’re really experiencing an adventure story from the past. If you see it, keep your ears open for a line delivered early on by Schmidt that’s a total nod to the Indiana Jones movies.

So, it’s a real shame the picture nose-dives in the third act. The pacing and set-up is so great, but it feels as if the filmmakers, concerned their tale couldn’t sustain a longer-than-average running time, condensed the final hour into thirty minutes. Action sequences follow one after the other, and at no time does it feel like Cap and his amazing flingable shield are in any real danger. The sense of jeopardy really ebbs as the more cartoonish action takes hold. We do see plenty of soliders get vaporized, even a key character loses his life (or does he…?!) but nothing gets the required emotional impact. And the final battle with The Red Skull just feels rushed, leading to the inevitable set up to next summer’s superhero team-up movie The Avengers, including what amounts to a trailer for that picture post-credits.

It’s unfortunate that the fun of the first part is squandered, but in this summer of superheroing, you could do worse than this. Though I gave a passing grade to Green Lantern, that picture really hasn’t freshened in my memory, while Captain America does manage to deliver some solid, if inconsistent entertainment.