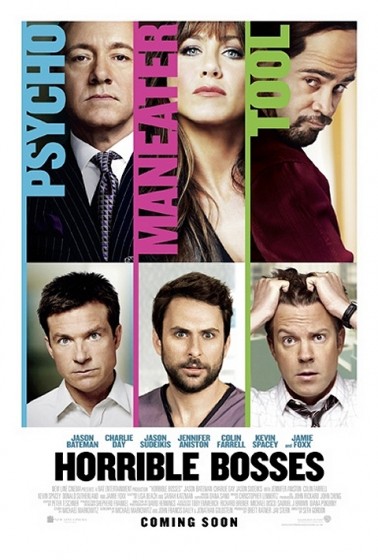 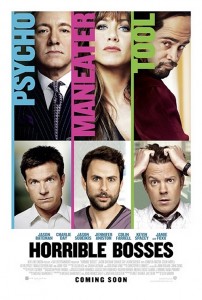 If you’ve seen the trailer, you know the deal. Three buddies, Nick (Jason Bateman) Dale (Charlie Day) and Kurt (Jason Sudeikis) complain to each other over beers that they each have the world’s worst boss. Nick’s boss Harken (Kevin Spacey, channeling the guy he played in Swimming With Sharks) is a real office-place sadist, while Dale’s boss at the dental clinic, Dr Harris (Jennifer Aniston), is macking hard on him in embarrassingly overt ways. Kurt’s boss is the kindly owner (Donald Sutherland) of the chemical company he works at, but he promptly exits the picture, so his cokehead son Bobby (Colin Farrell, sporting an excellent combover) is soon in charge, making all kinds of bad decisions.

I mentioned the trailer, yes? If you’ve seen it, you’ll have gotten most of this. So, the three buddies decide to kill their bosses. They go so far as to hire a hitman named Motherfucker Jones (Jamie Foxx), though they wind up having to do a lot of the work themselves.

So far, so meh. The set-up really takes its time getting to where its going, and the first act is pretty bereft of laughs.

There is the feeling that this could go really dark, especially with Bateman on board, who channels an undercurrent of anger and suppressed violence in his work. One of these days someone has to cast him as an assassin or murderer, I think he’d pull it off convincingly. Unfortunately, we don’t really see much of it here.

But an unusual thing happens: Once we get to the moment where the plot really kicks in, past what they show us in the trailer, that’s when the picture catches fire. A series of stakeouts outside the bosses homes, as well as a break-and-entry or two, and things are rolling. It’s a rare comedy that gets funnier the longer it goes, and it has a lot to do with the easy chemistry between the three leads. Day’s charm escapes me, but Jason Sudeikis as the ladykiller of the trio winds up stealing the film from his cohorts, a bit of a surprise. And Jason Bateman is becoming a kind of Jack Lemmon-esque performer, the slightly strung everyman star of middlebrow comedies. And more power to him.

Part of the joy of Horrible Bosses is watching the veteran actors go through their paces. Farrell is a bit uni-dimensional, but the character is such a departure for him there’s a lot to enjoy anyway. Spacey has played this guy before, but he’s so venal and nasty, and he’s so damn good at it, it’s a pleasure to see him do it again.

And Aniston has a lot of fun with the increasingly blunt seduction of her employee. Kurt says what most of the men in the audience are thinking: Dale’s circumstances don’t seem nearly as bad as the other guys, even when she blackmails him, due to Aniston’s considerable sex appeal. Would it have been funnier if they’d chosen a much less fetching performer for the part, making Dale’s predicament that much more uncomfortable? Maybe, but like Farrell, there’s a pleasure seeing the actor work outside her comfort zone.

And Jamie Foxx lands a couple of killer lines, one about the film version of Snow Falling on Cedars is particularly hilarious.

Horrible Bosses is far from a comedy classic, but it does have a couple of great moments and works hard to squeeze laughs out of its high concept.