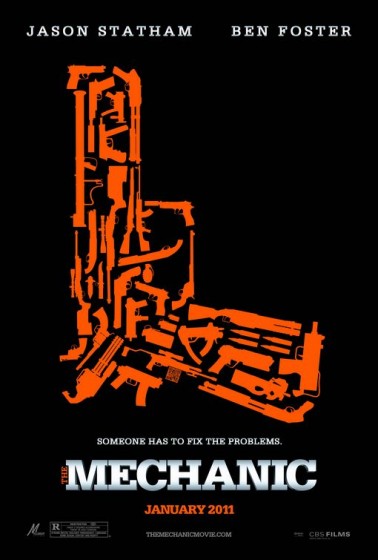 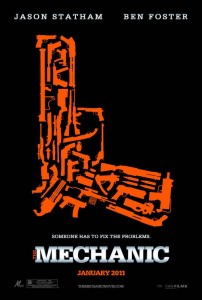 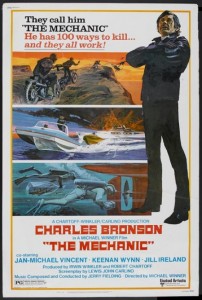 For fans of action movies, watching these two workman-like examples of the genre is a great lesson in how much they’ve changed in the past 40 years.

These days we expect our action heroes to be muscular and physical. The pace of your average action flick has to clip along now, very little interstitial scenery. Segments are edited together with songs, as in music videos. There’s much more fetishization of equipment, guns and hand-held artillery. And characterization is by-the-way, so long as the explosions are large and the foley of kicks to midsection rings true.

The Mechanic, either version, is a pretty straight-forward story. Arthur Bishop (Charles Bronson ’72 /Jason Statham ’11) is a hitman, a very skilled killer who, when called for, can make a target’s death look like an accident. He’s patient and methodical, while still a man of style, enjoying classical music and exotic sports cars. His mentor is Harry McKenna (Keenan Wynn/Donald Sutherland), the only friend this loner has, and McKenna gives him his assignments. However, McKenna pisses off the wrong people in the head office, and he becomes Bishop’s next target, which Bishop executes with his customary skill. However, McKenna’s ne’r-do-well son, Steve (Jan-Michael Vincent/Ben Foster) is a loose end. Bishop, perhaps motivated by guilt, takes the young man under his wing, training him as an apprentice, further upsetting the head office. The question becomes: when will the student become the teacher? Or some such.

Watching the ’72 version now, it’s so deliberate in comparison, not only to the remake but every other hitman movie of recent years. Bishop’s set-up of his target in the first few, dialogue-less scenes of the film, feels avant-garde both for the era and for the genre. It demands a little patience from the audience but pays off in spades. It’s stylish, and shows director Michael Winner had a genuine visual imagination. While West, maybe best known for Con-Air and Lara Croft: Tomb Raider is the dictionary definition of a journeyman action director. He can do it and with some impact, but in the most anonymous way possible. No personal signatures here.

Another big difference is in the characters. What is almost shocking is how amoral Bishop and his young apprentice were back in the original picture. Bronson’s character was mysterious and chilling. In some ways, we learn about him through Vincent’s eyes. Not that Vincent’s much more cuddly, but the bond between the men seems genuine and electric, perhaps even homoerotic. Can’t risk that kind of overtones in the new picture. Statham is cold all right, but not terribly compelling in terms of his psychological makeup. Aside from the choice in sweaters, I don’t see a big difference between his character here and the guy from The Transporter. While you always wonder what’s going in Bronson’s mind, with Statham there isn’t much time to consider his motivation. Stuff keeps happening too quickly. Even the question of his guilt over the murder of his mentor isn’t really dealt with until a scene late in the running. And while Foster seems to be haunted by a few demons, he doesn’t get a lot of chance to emote.

In both films, the only female character of note is a hooker (Mini Anden/Jill Ireland) though in the new edition at least she has a name, Sarah, where in the original she was just The Girl. Her role in the original was to help show some of Bishop’s psychological damage, as she gives him The Girlfriend Experience. In the new one, there’s a perfunctory sex scene, and not much else to recommend her presence.

And the very satisfying conclusion of the first film is given a bit of a flip in the remake, though I wasn’t surprised at all. I’m sure the producers of the 2011 edition didn’t want to close the door on the possibility of a new franchise. Everyone can’t be dead at the end.

It’s not that either film is a classic, but the original had some interesting things going on in it where the new one just hits the action-film touchstones in a pretty predictable way. The original had the courage of its convictions, a movie about a guy who kills for a living, and how does he live with himself is a question explored. Statham’s Bishop pretty much only killed bad people, and when shoving a girl’s hand into a garbage disposal he only pretends to mutilate her to pressure her father into giving over some key information. I could have imagined Bronson’s Bishop actually doing it (if they had such things as garbage disposals in 1972).