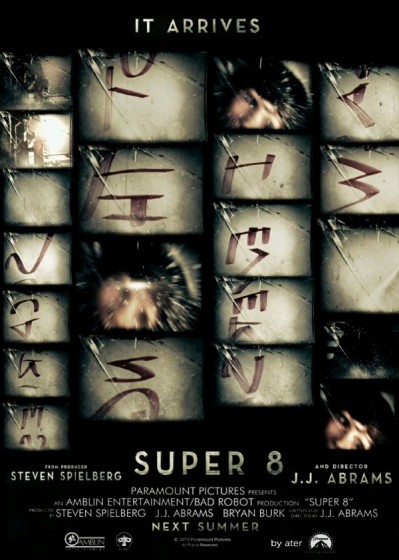 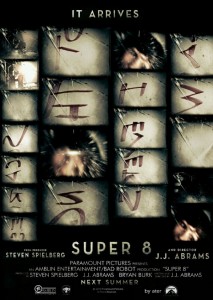 Written and Directed by JJ Abrams

As I was stretching my legs after the conclusion of Super 8, along with some of the end credits, the audience gets to see an edited version of the Super 8 film our young heroes are shooting through the duration of the movie we’ve been watching. It’s really sweet and funny and full of spirit. A zombie flick called The Case, it’s about a hardboiled detective in a small town investigating murders that may have something to do with the local chemical plant turning people into zombies. At the end of it, a woman in the audience said, “That was the best part of the movie!”

She’s not wrong. And that’s not to say that Super 8 is terrible or a waste of time. JJ Abrams gets a lot of things right in his effort to create a facsimile of a Steven Spielberg movie back when Spielberg was the cinematic voice of his generation, offering visions of suburban America so authentic, when threatened by a shark (Jaws), alien abductions (Close Encounters of the Third Kind), aggressive ghosts (Poltergeist, directed by Tobe Hooper but produced with a heavy hand by Spielberg) or even just visited by an ugly/cute spaceman (ET) we were entirely engaged, we were in the movie, sharing the characters’ sense of wonder. What Abrams isn’t quite able to achieve is that wonder, despite swinging for the fences, even having Spielberg on board as a producer.

Super 8 concerns itself with the summer vacation of a group of five boys and a girl in a small Ohio town called Lillian in 1979. The production design is excellent on this… it sure looks and feels like the 70s in the clothes, cars, music and signage. One of the kids is Joe (Joel Courtney) whose mom died in an accident at the local mill the winter before, is kind of the leader of his little gang. He’s the fx and make-up guy on the super 8 movie his friend Charles (Riley Griffiths) is directing. Joe’s dad (Kyle Chandler, the spitting image of a young Robert Forster) is the deputy sheriff, not terribly connected to his son, so Joe spends some time over a Charles’ place, right across the street. That household is the most Spielberg-esque thing in the movie. The kids all yelling and a carrying on, one taking a plastic baseball bat to the dinner table, conversations overlapping, the very model of a functional American movie family.

Charles invites the cutest girl in class, Alice (Elle Fanning) to play a part in the movie. They’re all supposed to be 13 or something, but she borrows her father’s car to drive the young filmmakers down to the railway station to shoot a scene after midnight. I think she’s supposed to be a little older, but she seems more like 15 or 16 next to these boys, it’s hard to imagine she’d have anything to do with them. And her father has bad blood with Joe’s dad, something to do with Joe’s dead mom, so that’s not good either.

The set-up is pretty sweet. There’s enough drama in these kids’ lives that it doesn’t feel too light. At the train station a car, driven by the kids’ science teacher, slams into a train, causing a giant CGI derailment, which is big and impressive I suppose, though a little over the top. Doesn’t compare to Andrew Davis’ The Fugitive for authenticity, if you wanna talk movie train crashes. The train in question was an air force transport, maybe from Area 51. It was transporting some kind of mystery beasty, now free to roam, and as the military swoops in, strange things start to happen in town. And the kids, being smarter and more emotionally mature than most of the adults, see it before they do.

The kids are great, especially Courtney and Fanning. Their performances are the reason to see the movie. There are some genuine emotional moments between them. And Abrams does a good job building up the suspense around what the creature actually is and what its doing.

But as things come together in the third act, suspense is replaced with explosions and running and screaming, and all of a sudden it’s a monster movie from the 1950s instead of what it was before. Which is fine, but it felt like it aspired to more up to that point. When the thing in question is revealed, it’s your run-of-the-mill CGI creation, something less credible than a Predator or one of those tentacled fellows from the first Hellboy. While the nostalgia is so well-handled, there’s nothing fresh about the payoff. When the ships took off at the end of CE3K and ET, it was joyous and amazing. There’s not much here in the spectacle side of things we didn’t see in Thor. Maybe a moment with a locket that’s sweet, but it’s not quite enough.

It’s a tough call, but if Abrams’ plan was to make a movie in the style of the master, it’s going to be compared to what he’s emulating. Maybe that’s unfair, since a lot of Super 8 is worthwhile and well-done, but it’s off the mark in its key intent.

Anyone who knows my feelings on Abrams’ Star Trek reboot knows that one of main complaints in his visual style is the overuse of lens flares, the constant blue flashes of light coming from out-of-frame, distorting the image. Well, he does it again here too, but he manages to restrict it to mostly nighttime exteriors. Let’s hear it for the restraint.