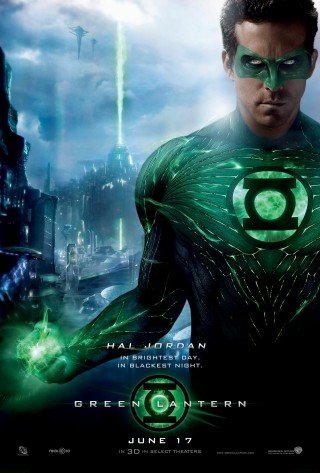 It’s not even July yet and we’ve had three superhero movies. Can you believe it? And of all of them, this is probably the least likely and thus offering the most curiosity from comic fans. A Green Lantern movie. How weird is that?

DC Comics’ interstellar hero on screens this Friday is actually the second comic Green Lantern, a test pilot named Hal Jordan (Ryan Reynolds), who finds the green power ring that gives him the ability to create “green energy” constructs, solid objects of a size and variety only limited by the ring-bearer’s imagination and willpower. The ring actually chooses him, as it is a sentient force recruiting him to be part of the Green Lantern Corps, a galactic police squad, fighting the good fight against agents of fear. And fear is yellow, embodied in a nasty tentacled cloud creature called Parallax (with the voice of Clancy Brown, who was once The Kurgan in Highlander).

On earth, Hal is a bit of a headcase. A talented military pilot, he has unresolved daddy issues since his father, also a test pilot, died in a fiery explosion when Hal was a kid. Since then he’s been trying and failing to make something of his life, but really all he’s good at is flying jets. Nothing to sniff at, but for Hal it’s not enough. He’s no good at relationships… he almost had one with fellow pilot Carol Ferris (Blake Lively), but bailed. Ferris is helping her father (Jay O. Sanders), a weapons manufacturer, promote his jets, along with Senator Hammond (Tim Robbins), who doesn’t think much of his own son, Hector (Peter Sarsgaard), a high school science teacher. Turns out Carol, Hector and Hal grew up together. Or something. They all know each other, anyway.

So, when the ring chooses Hal, it’s because its previous bearer, alien Abin Sur (Temuera Morrison) was mortally wounded by Parallax. The council of blue aliens (it’s all about primary colours, you see), The Guardians of the Universe, who seem to be in charge of the Green Lantern Corps, discuss how to best deal with Parallax, who used to be a Guardian before the Power of Fear corrupted him. The most purple of the Green Lanterns, Sinestro (Mark Strong) tries to rouse a small group of the corps to face the evil cloud, but to no effect.

Hal doesn’t seem to be too shaken up by being chosen to be part of the Green Starfuzz. Though when he meets his colleagues, he is told as a human he’s a lower form of life, unworthy, and he believes it and tries to quit. Meanwhile, Hector, who gets a chance to do an autopsy on the dead Abin Sur, picks up a bit of the yellow fear virus, and his cranium grows to an enormous size as he picks up telepathic and telekinetic powers.

OK, if you’re still with me as I provide an outline of plot points, you’ll agree this all sounds incredibly silly. And it is. To make matters worse, the movie has plot holes big enough to drive a truck through, the characters are paper thin. You could even say as thin as the paper comics are printed on.

But, after all the post-modern superhero adaptations, geared to be appreciated by older audiences, this one is simple and earnest and will probably be appreciated by the kids it’s obviously aimed at. And I hate saying that, since it’s presumptuous to say what kids would enjoy, even though I was one once. I should be looking at Green Lantern for what it does for me. So, I’ll say this much: It’s a silly, silly movie, but I wasn’t made angry by it, I wasn’t bored by it. I probably wouldn’t recommend it to anyone but the hardcore superhero fan who wants to see what they made of the material, but it’s not dull.
If I had to compare it to any other movie in this genre, I’d say it racks up there with The Fantastic Four in spirit. Maybe more so the sequel.

Ryan Reynolds is a big part of the entertainment value. There are a whole bunch of dud lines, but the ones with wit are the ones coming out of his mouth, and he’s got charm. And he helps let us know the movie doesn’t take itself too seriously, which is really for the best. Peter Sarsgaard and Tim Robbins can do a lot more complexity than they’re able to give here, a disappointment given how good they are generally. Mostly, it’s hard to believe one as the son of the other. I wonder what it was about these roles that appealed to them. Sarsgaard does get the Elephant Man make-up, which he looks to have fun under.

The special effects are as convincing as they needed to be. A portion of the film takes place in outer space, on alien worlds, and all that worked. I saw it in 3D, which always gives me a headache after about an hour, but for this big cartoon of a movie, it may have improved the experience to some degree, headache notwithstanding. That might be a first.