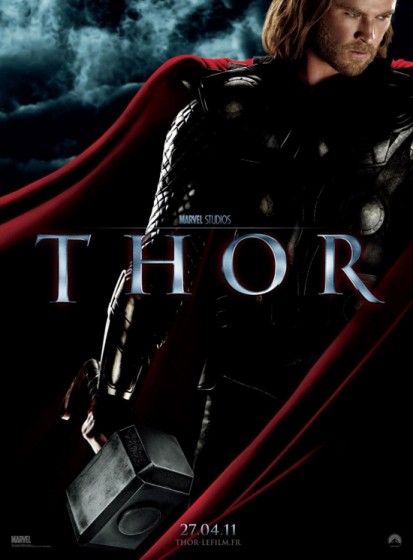 I’ve always enjoyed the first weekend in May, when Hollywood traditionally launches its summer blockbuster season. The LA dream-factory does its best to hit the ground running, as it did back on May 2, 2008 with Iron Man. The non-entirely-unexpected success of that film gave Marvel Studios the green light to create a franchise of superhero movies, all aiming towards their big superteam flick, coming in May 2012—directed by none other than Joss Whedon himself—entitled The Avengers. It’ll feature the Hulk, Iron Man, Thor and Captain America, who’ll have his own movie out later this summer. Other characters will include Nick Fury, Hawkeye and the Black Widow.

Anyone who’s read Marvel Comics through the years will know all these characters. Of all of them, Thor, literally the Norse God of Thunder, is the silliest and most prone to camp ridiculousness. So, the filmmakers should be congratulated that at least they’ve managed to avoid that pitfall.

It doesn’t start well, though. A good portion of the first act is spent showing the Norse gods, from their heavenly seat of power, Asgard, tilting at their enemies the Frost Giants. Instead of the dread of, say, the Lord of the Rings flashback where Sauron’s evil is palpable, these blue Avatar rejects fighting the shiny-armored, pointy-helmed warriors don’t really seem terribly scary, nor do the gloomy and obviously CGI-created alien environments help provide much in the way of jeopardy. But as god-king Odin, Anthony Hopkins does provide some weight, and as the Frost Giants’ leader, Canadian Colm Feore glowers with conviction. It’s easy to see why Branagh chose these two Shakespearean thesps to anchor the backstory.

As it happens, Thor (Chris Hemsworth) is a brash sort, and his commando raid to the Frost Giant realm upsets his father, and so he’s banished to Earth, his powers stripped, leaving his duplicitous brother Loki (Tom Hiddleston) access to the throne.  As far as enjoying the movie goes, things improve greatly with Thor’s arrival on our mortal shores. In New Mexico, Thor meets Jane Foster (Natalie Portman), an astrophysicist studying strange phenomena in the desert skies, her mentor Erik (the always reliable Stellan Skarsgaard) and the comedy relief, assistant Darcy (Kat Dennings). Marvel’s secret service SHIELD is also involved, as repped by Agent Coulson (Clark Gregg). Everyone’s fascinated by Thor’s hammer, apparently stuck fast on a termite hill, though it’s unclear why exactly they’re all so interested, besides the fact no one seems to be able to pick it up.

The middle act is the most satisfying, as Thor’s entitled attitude makes for a funny scene or three. It’s a shame more time couldn’t have been spent with him getting accustomed to life on this planet, along with his romance with Jane, because that stuff is gold. Unfortunately, the plot has to kick in, providing Thor with his humbling denoument and eventual return to Asgard to battle with Loki.

There is a fair amount of entertainment value here. It’s hard to go wrong with this cast, even though I wish Dennings, Feore and as Thor’s mother Frigga, Rene Russo had more to do. Loki, essayed by Hiddleston, is hissable, but his motivations certainly make sense. The armoured sentinel The Destroyer is pretty damn cool, as is Stringer Bell himself, Idris Elba, as Heimdall, guardian of the gorgeously realized Bifrost, the rainbow bridge between Asgard and the rest of the universe. Avengers fans will enjoy Asgardian supporting cast including Sif (Jaimie Stevenson) and a cameo appearance by Jeremy Renner as Hawkeye. Don’t forget to stay past the end credits, too.

It’s easy to understand why Branagh was chosen for this picture, and why he’d take it. The key relationships, between father Odin and sons Thor and Loki, certainly mirror the fathers and sons in Shakespeare. Power and experience play a role. And Hemsworth certainly fits the thunderous part. His muscles have muscles, and he stomps around mightily.

But at the end of the day, Thor’s machine-tooled gloss left so little room for personal flavour, I walked out feeling a distinct “meh.” The parts don’t add up to a terribly memorable whole, and though the godlike superhero fits nicely in the cinematic world Marvel is constructing, he’s nowhere near as much fun as Robert Downey Jr’s Tony Stark. I was left wishing for more character and more feeling, which may have been an expectation too high for this kind of material. But Iron Man set the bar way up there, and so far the Avengers prequels (counting Edward Norton’s go at Hulk, Iron Man 2, as well as this movie) have yet to reach it a second time.