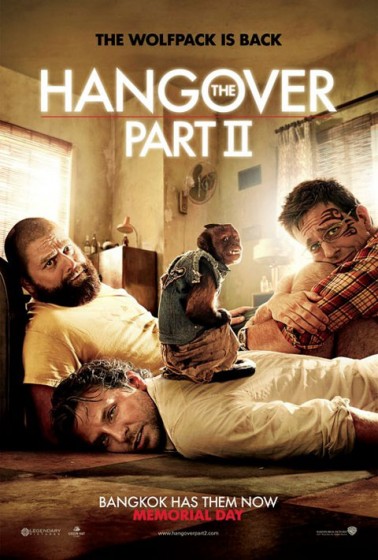 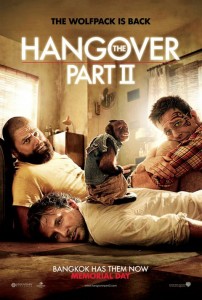 In 2009, The Hangover blew the doors off the box office. There have been a few big R-rated comedies in recent years, all those Apatow pictures, but this beat them all. And, you know, that can’t be a bad thing. Sure, it was in some ways a very broad guy-comedy, with humour that could be considered sophomoric, but it was certainly a movie aimed at adults, which we can’t get enough of these days, in this age of Kung Fu Pandas, Thors and Final Destinations.

In The Hangover, a dude is about to get married, inviting a few friends for a night out before the wedding. The guys all get very drunk, and are also drugged, so when they wake the next day they all remember nothing of the night before. To make matters worse, one of their number is missing. They struggle to consciousness in a trashed hotel room, with a wild animal in the bathroom, and one of them physically disfigured from the events of the night before. As they start to piece together what happened, as well as find their missing friend, they wander the city and discover evidence of the party rampage they went on during the past 12 unrecalled hours, when they behaved in ways they ordinarily wouldn’t thanks to a combination of alcohol and roofies. They also get into some real danger with some unsavory criminal characters. In the end they get shot at, meet some interesting people, manage to figure it all out, locate their missing pal and just barely make it to the wedding on time.

Does that sound like a reasonable summary of the events of the first film? Well, exactly the same thing happens in the sequel. Substitute Bangkok for Las Vegas, and it’s pretty much the same movie. The humour is character- and circumstance-driven, which is good, and as an audience we have some affection for these characters, but enough to watch them go through the exact same thing a second time? That’s asking a little too much of me.

Phil (Bradley Cooper) is the alpha male and the coarsest, while Ed Helms’ Stu is the more conservative one, a dentist. Stu’s getting married, to an Thai-American woman, whose family wants them to get hitched in Thailand. Also present is Justin Bartha’s Doug, and even though he’s not the one who vanishes this time, he makes about the same impression as the first movie, which is next to none. Despite the fact that he drugged them the last time, they find a way to include the manboy Alan (Zach Galifianakis) in the wedding plans. Apparently these guys are especially forgiving of this borderline psychopath, because he’s really a sweet guy. Or something.

Structurally, we start with a confessional phone call, the flashback a week, then the set-up and the night no one can remember. Instead of a tiger, we have a monkey in a Rolling Stones denim jacket. Instead of the busted tooth, we get the tattoo on Stu’s face, which would have been funny and surprising if it wasn’t for the ubiquitous trailer and poster showing it, and the highly publicized lawsuit by Mike Tyson’s tattoo artist versus the film’s producers.

The problem of a lack of novelty faced by all sequels is compounded here because of this slavish need to stick so close to the successful model provided by the first picture. And it’s not to say that the performers don’t have a few solid, funny moments. There’s an odd Billy Joel theme throughout the film, driven home by Stu’s hilarious, acoustic rendition of “Alan-town.” And there certainly is a lot of male full-frontal nudity in this thing. For fans of penii, there’s plenty to enjoy. (Not Bradley Cooper’s, those who are wondering.) And, yeah, they’re a likeable bunch of performers to spend time with.

But the sameness is disappointing. A few real surprises would have been nice, and Bangkok ladyboys do not qualify as a surprise in a comedy of this sort set in Thailand.