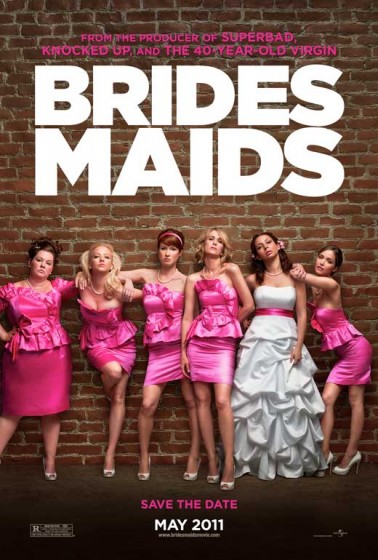 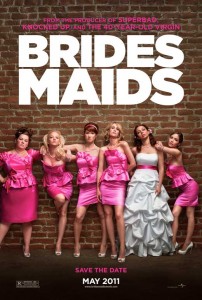 So, it isn’t a female version of The Hangover, as some of the marketing wags would have you believe. But it is very much a Judd Apatow movie. As producer, his hands are all over this. (Especially a bodily function-humour scene about halfway in.) I’d say it’s one of the better Apatow movies, but I wouldn’t give it a 90 percent on Rotten Tomatoes that it’s currently floating at. I saw it as more of a 75.

Lillian (Maya Rudolph) and Annie (Kristen Wiig) have been friends since childhood. Annie’s going through a bit of a tough time. Her business failed, her boyfriend left her, her roomie is Matt Lucas from Little Britain, so you know that can’t be good, while Matt’s “sister” Rebel Wilson is hanging out on the couch all the time. Annie gets some satisfaction by going over to fuck Ted (an uncredited John Hamm, a little weird that he would be uncredited) who treats her like shit once the sweat dries. And then Lillian gets engaged to her strangely invisible boyfriend—we see him twice and he doesn’t have a line—and you can see the anxiety growing in Annie, to see her friend take this step, to maybe be left behind.

Wiig’s specialty on Saturday Night Live is to play grossly insecure and neurotic characters, and here she doesn’t shy away from a few traits that really risk her likeability to the audience. More than once I found her crossing the line from a bit sad to outright pathetic and even obnoxious. But, for the most part, she plays it real, which is to her credit.

There are a number of laugh-out-loud moments in Bridesmaids. They start with the sexual acrobatics of the opening scene with Annie and Ted and continue with a great lunch scene between Annie and Lillian. Later there’s a scene on a plane to Vegas which is killer and a bridal shower freak-out. The supporting cast, often cardboard cutouts in broad Hollywood comedies, manage to register here with a lot of personality, especially Melissa McCarthy as fellow bridesmaid Megan, the sister of the groom.
And Rose Byrne, so great in dramas such as TV’s Damages, here and in Get Him To The Greek is proving her comedy chops. Of course, she was also in Chaz Thorne’s Just Buried, for those Nova Scotia film fans.

And yes, there is a scene that makes the most of the comedy potential of vomit and diarrhea, which, rumour has it, Apatow penned himself. It qualifies Bridesmaids as a gross-out comedy of the first order, and it’s great to see this kind of movie where the women are front and centre.

I will, however, never understand the appeal of the terrible Wilson Phillips, whose music plays a key role late in the running.

But that’s a small gripe. A much bigger problem is one of the key plot points in the film, the OTT competition between Annie and Lillian’s rich, pretty friend Helen (Rose Byrne). With so much in the film feeling real, their obvious, mutual insecurity and competitiveness made them look ugly and everyone around them look stupid, especially Lillian, for putting up with it. A scene at the engagement party in the first act goes on so long it almost capsizes the movie with its awfulness, just like a terrible SNL skit that doesn’t know when to end. And those kinds of broad moments mean that when sweet cop Rhodes (Chris O’Dowd) shows up, looking like the best thing to happen to Annie in ages, the dramatic moments that do happen between them don’t feel earned.

It’s a blatant misstep in an otherwise sharp comedy, and Wiig’s performance and the key roles around her save the picture in the third act: Helen gets to not be a cartoon and Annie gets to not be entirely crazy. The general feeling I had coming out is the movie’s a winner, and Wiig, a perennial supporting actor, gets her moment to shine.

And the wonderful Jill Clayburgh, RIP, playing Annie’s mom, gets to go out in a role much more suited to a veteran performer of her talent than a walk-on as Jake Gylenhaal’s mother in Love & Other Drugs.