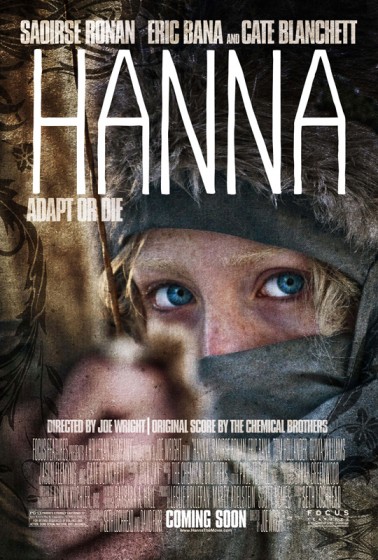 Hanna is a lot of things. On the surface it’s what the trailer says it is: Saoirse Ronan is the titular teen, raised since diapers to be a polyglot killer by her father, Erik (Eric Bana) in a shack in the snowbound wastes, hiding from CIA nasty Marissa (Cate Blanchett) until she’s old enough to face up to the secrets of her origins. It’s also a canny reinterpretation of Snow White,  Little Red Riding Hood and any number of Grimm Fairy Tales, a thriller in sheep’s clothing, with the girl, her woodsman father and the wicked witch all playing their roles. Beyond that, it’s a lovely coming of age story, where a sequestered teen learns about electricity and music and the delicious appeal of modern life. And, in moments, a comedy. It doesn’t take itself too seriously.

The discovery of the story is one of the real pleasures of Hanna, so I won’t reveal too much about it, suffice to say the surfeit of European locales gives the film a lot of punch, and allows viewers to experience some of Hanna’s feelings of dislocation and discovery once she’s been plucked from her wintry home.  As she escapes her captors, discovering the wider world around her, Wright and his cinematographer Alwin H. Kuchler allow for gorgeous visual elements outside the genre familiarity of a Kick-Ass or a Bourne Identity, two movies Hannah resembles superficially.

A lot of props must go to the actors. Blanchett has a blast with her role, the just-so costumes, her barely contained bitterness and her wolf-like obsession with dental hygiene make for a perfectly defined villain, while Bana, with a brief screen time, excels in the physical requirements. Liam Neeson keeps getting these action pictures, I think Bana should be doing more of this kind of thing. And Ronan, who I thought lucked into awards attention with her role in Wright’s Atonement, is much more compelling here with her pale skin, blue eyes, and open face. Watching her in almost every scene takes no effort. Finally, extra credit goes to Tom Hollander as a fey German assassin. Whistling men who wear Wimbledon-ready tennis clothes off the court are certainly not to be trusted.

This is a picture where the middle act is the best, which isn’t to suggest the ones surrounding it aren’t worthwhile, but Hanna unfortunately most resembles its action predecessors like the Matt Damon government-spawned killer series in its final 20 minutes. It’s satisfying, but not as surprising as the rest.

What makes it work, overall, is that it manages to do all of this without seeming too ridiculous. Or, at least, when it does overreach, the perfectly chosen Chemical Brothers beats or swirling camera sweep you back into the midst of things before you have too much time to analyze the plot holes.

Hanna is a huge pleasure, one of the best movies of 2011 so far.