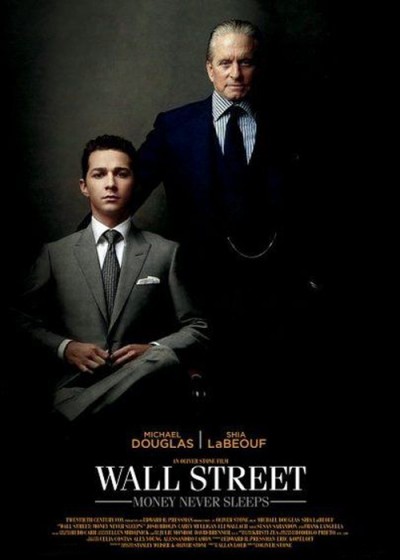 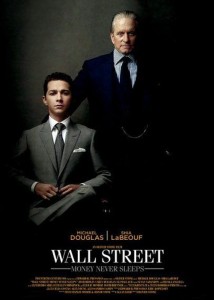 Directed by Oliver Stone
Written by Allan Loeb and Stephen Schiff, based on
characters by Stone and Stanley Weiser
On DVD

About 40 minutes into Oliver Stone’s revisiting of his 80s screed on the dangers and allure of big money, the sequel to Wall Street feels just a little, I dunno, drab? It’s hard to put your finger on what it is. Maybe it’s the relationship between Shia LeBoeuf’s Jacob—a wily and clever wall street trader into green energy—and his investment banker boss and mentor, Louis Zabel, played by Frank Langella. Zabel is painfully depressed about his work, and this is the summer of 2008. What do you think is going to happen? Meanwhile, Jacob is set to marry his girlfriend Winnie (Carey Mulligan), the daughter of Gordon Gekko, who everyone will remember from the first film, even if they’ve never seen it.

That’s because Michael Douglas did something with Gekko, beside winning an Academy Award, that you rarely see: he made him an icon of the age, bigger than the movie. When Gekko said, “Greed is good,” the moneymakers of the empty 80s said in response, “Damn straight!” It was the Reagan years, a time of ridiculous fashions, cocaine, big hair and bigger money. Though Gekko was the bad guy in the first film, you loved him anyway.

Coming out of jail, Gekko has written a book about where the American financial system is today, though he hardly seems like a prophet. You can see Stone straining for an epic in this tale, in the running time, which is extensive, the Scorcese-esque visuals— some razzle dazzle with split screen cell phone calls, digital number tumbles out of The Matrix along with ghostly apparitions to help put us into the heart of the machine, but it just serves to alienate and suggest he doesn’t trust his script or audience enough.

Say what you will about the car wreck that is Charlie Sheen, he was relatable. LeBoeuf, to my tally, has had about a reel of screen time where he was likable, and that was the first act of the fourth Indiana Jones movie. As this story goes on, it’s the support that keeps it moving. Mulligan has a scene opposite Douglas where she show what acting is without moving her face at all. And Josh Brolin is an ominous presence as Bretton James, an amoral Wall Street gajillionaire Jacob wants to take down. And I will say the aerial shots of Manhattan, they can’t help but impress. That and choosing David Byrne and Brian Eno to score the thing. Their songs give the picture a sweetness it doesn’t earn.

It’s hard to know what Stone really wants us to think here. Plus ca change plus ce le meme choses? Gekko is the character who seems the most changed, but I don’t know that the movie agrees with his stripes. And speaking of not earning, there are a few contrivances late in the running that just didn’t wash.

When Bud Fox, the Charlie Sheen character shows up on the arm of two women, he’s a self-made man, busy with “golf, winters in St. Barts, philanthropy.” Coming out of Sheen’s mouth, it rings about as hollow as a crack pipe. And I thought Bud Fox was supposed to be the good guy. Maybe that’s what Stone is saying: In the dark, all cats are grey.