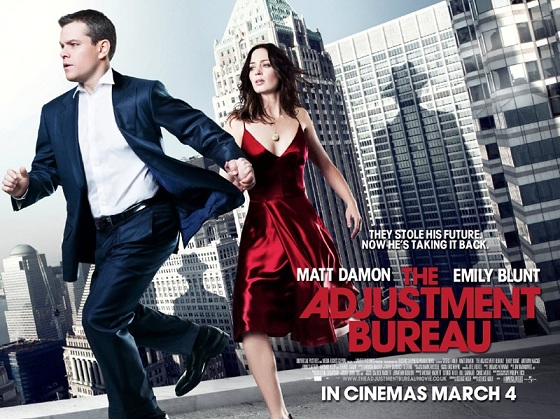 Why am I such a sucker for a fantasy so surely set in the real world? I wish I knew. Just superstitious, I suppose. So long as the internal logic makes sense to me, I’ll run with the most outre magical realism. And The Adjustment Bureau does require a whole lot of running.

Matt Damon is David Norris, a young New York State senatorial candidate headed for big things. Damon is so capable, it’s easy to imagine him in political office. (Let me say it here first, Damon for President in 2016!) When we first encounter him his impulsive past as a frat boy comes back to haunt him and he loses the election. But just as he’s working on his concession speech he has an encounter with Elise (Emily Blunt), a modern dancer. It’s lightning between them, with an impromptu smooch and everything. The meeting changes the content of his speech for the better.

But forces are arrayed to keep them apart. The bureau of the title is a group of fedora-sporting, grey men in coats who can see the various forking paths to the future, all mapped out in these books they carry around. Periodically they step in to help point us down the right path, to help things go according to The Plan, which The Chairman in the upper office has concocted.

It’s a fairly ridiculous premise, though it does promote some fun discussions on freewill versus determinism. The problem with this bureaucracy, as with any, is its staff. The whole look, very Kafkaesque and The 39 Steps, makes them feel like an anachronism. Nothing that Jason Bourne can’t solve, you’d think. And they’re also not that interesting as antagonists. In a break from Mad Men, John Slattery seems a bit deflated, with less of Roger Sterling’s alcoholic, sexist zing (though the chapeau connects the dots).

The most frustrating thing about the omniscient men is that they distract us from the romance, which is totally on. Damon and Blunt have crazy chemistry and I yearned for more scenes with the two of them together. When they’re having lunch in a scene about halfway in, they keep cutting away to follow the Bureau enforcers as they work out their intervention, and it’s irritating. You wish the plot would just chill for long enough to let this couple really connect and dazzle us, or at least offer a hot sex scene. Both Damon and Blunt exude intelligence, and in some ways are smarter and more appealing than the movie around them.

But they can’t be together, which is a bummer. When a big wheel from the Bureau appears, played by the increasingly stonefaced Terence Stamp, he explains how Norris is headed for the highest office in politics and Elise for international success as a dancer, but they’ll not accomplish half of that if they wind up together. Their happiness will rob from them any ambition to do great things. Seems a reasonable toss up to me.

Of course, sacrifices have to be made. We learn more and more about this organization, how they move through time and space, why the hats are important, and how The Plan gets rewritten periodically, offering a way out of this mess, if some measure of freewill really does exist.

This is the first feature by George Nolfi, who’s best known for having scripted Oceans 12 and The Bourne Ultimatum. Though I found plenty to enjoy, I winced occasionally at some of his choices; a music-stuffed montage of Norris’ political campaigning in the first few minutes was a bit much. But as I mentioned off the top, I really liked the premise, as I do of most Dick-sian material. Damon is one of the most watchable guys in Hollywood and never feels anything less than authentic. Blunt, meanwhile, is electric. The combination of casting and concept really worked for me.

And while I think the conceit could have developed into a real philosophical riff—instead it goes for the big chase, as old-fashioned as those hats—as far as fantasy romances go, this is the first in awhile that I’ve liked, maybe since The Time Travelers Wife. And it’s just about as flawed as that movie was.

The big question for me was this: why the hell was the de-lovely Jennifer Ehle, recently seen in the Academy Award-winning The King’s Speech, relegated to a two-line role as a nameless Brooklyn bartender? She must have owed the director a favour. That’s all I can think.