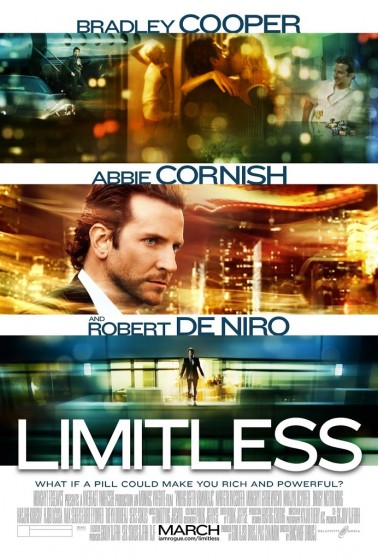 Limitless is a movie for our over-medicated times, and a concept so high and wired that the picture refuses to let you down until the credits roll. Sure, it could have been a whole lot more than just a rush, but in terms of what the trailer—and poster—promises, it delivers. First off, welcome Bradley Cooper. A real movie star now, carrying the thing. I’d say he’s comparable to Tom Cruise in the All-American charisma department, and while he doesn’t quite have Mr Mapother’s gnashing intensity, his blue-eyed confidence suits him well in this part. In fact, the biggest stretch is buying his character, Eddie Morra, as the shaggy, unfocused writer, paralyzed by inertia. A chance encounter with his former brother-in-law provides him with a new, untested narcotic, called NZT-48. That’s how Morra accesses his full potential.

He does his dishes, cleans up the flat, gets his life together. But more than that, he’s good at everything. He has complete recall, so utilizes every detail of anything buried in his subconscious, half-remembered encounters provide him with immediate information. And he can learn like crazy. Director Burger throws in a few nice visual tricks as the drug takes hold, including changing the colour palette, some wild CGI-inflected zooms and distortions that help give us the world-changing sensation NZT provides. The wish-fulfillment is fun—Maseratis and cliff-diving and sex—before the plot really kicks in.

Speaking of plot, holes run rife: if this guy is so in tune, how is it he doesn’t keep exact track of how many pills he has left in his tin? If he has such complete omniscience, how does he not find out that a character who is working for him is also working for a potential enemy?

Well, in case we didn’t get all the details, the voice-over gives us the low down, throughout. It’s a crutch, as voice overs usually are, but with something like this, with its plausible-scifi edges and Twilight Zone structure, a VO is simply part of the deal.

The best thing Limitless does is when it gets to what I call the Past the Trailer Moment—the first plot development beyond what’s laid out in the trailer—it neither bungles nor flags. The pacing is relentless, which helps when antagonists are introduced without much sense. What does our super-smart fellow do when he needs a large infusion of money? He goes to a badass loan shark, who looks and sounds like a thug from Eastern Promises. Really? With all the brain power at his disposal, this is the solution he comes up with? Not some credit card scam? How well do you think that’s going to work out for him?

And don’t go looking for any philosophical, emotional or spiritual implications of what expanding your consciousness and IQ might do for you. What the movie isn’t concerned with is offering much of a moral compass. Morra is a contemptible douchebag, really, and that leaves Abbie Cornish’s love-interest Lindy twisting in the breeze. She has exactly one good scene in the movie, but you never give a shit about her because neither does Morra, and we see the world through his eyes. Robert De Niro as a business associate of Morra’s has a good line or two, but not enough to justify the two-time Oscar-winner in the part.

Of course there are potentially deadly side-effects to a smart pill. For a second it looks like Limitless might wind up a simple anti-drug polemic, but its conclusion is so glib, it leaves you wondering if Charlie Sheen did a script polish. What it does is offer a good time, clipping along apace and offering a few, dubious laughs along the way.

I don’t know what NZT feels like, but Limitless has a cocaine buzz. You wouldn’t want to do too much, but it’s a thrill while it lasts.