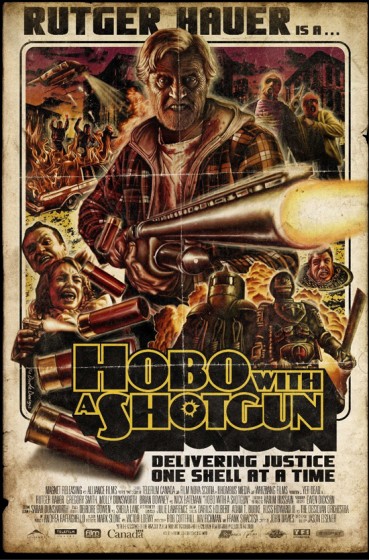 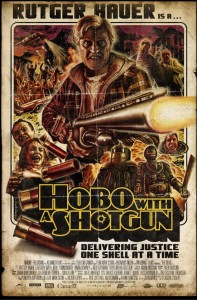 Directed by Jason Eisener
Written by Eisener and John Davies

This is a tough movie for me to review. It was made in my town, starring an actor I’ve idolized since I was a kid, Rutger Hauer. I’ve interviewed the director on a number of occasions, most recently in this week’s Coast cover story, which you can read here, and attended the premiere last night at The Oxford cinema, which I wrote about here.

The point being, I am totally engaged by the creation of this picture. It doesn’t make me the most objective voice on its relative artistic success.

I will say three things about it, now having seen it twice, once at a press screening and once with an audience of fans and crew.

1) It delivers what is advertised. Hobo with a Shotgun is a total exploitation thriller, shot in garish primary colours, featuring pointless, excessive violence, nudity—though less than I expected—and blood-spurting gore. It goes for it.

2) Though it is an homage to the low-budget action fests of the 1970s and 1980s, it is enough of 2011 to be self-aware. Many of the lines are self-consciously funny. Eisener manages to squeeze in a scene with characters fighting a giant octopus. You’d be making a mistake if you took this experience entirely seriously. And I enjoyed it far more with an audience game for the fun of it. If you see it, see it with friends.

3) It is an experience. Its plot is ragged with holes, and there’s not a moment of subtlety to be found. But it is the product of a singular vision, and a singular heart.