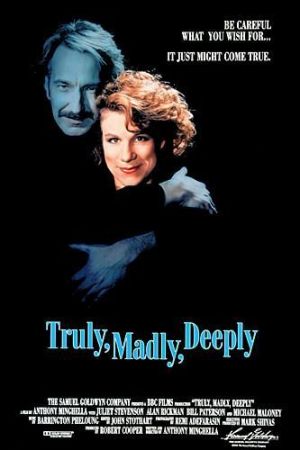 February 14, 2011 flawintheiris
Just a heads up for anyone who will be in Halifax this coming Thursday: I’ll be hosting Carbon Arc, the Khyber film society’s regular screening series, presenting Anthony Minghella’s first feature film Truly Madly Deeply, which for years now has been a favourite of mine. Feel free to come on down to the Khyber at

For anyone who is interested, here are my notes on Truly Madly Deeply and its director, the late Anthony Minghella:

Anthony Minghella is the director and writer. This was his first feature film script and directorial effort. It was shot in 28 days for $600,000 and came out in 1990 in the UK and in May 1991 in North America.

I spent that summer in New York City, where I was an intern at Marvel Comics. I went to a lot of movies that summer, but two experiences really stuck with me. One was the Friday night premiere of Terminator 2: Judgement Day at a multiplex at 19th Street and Broadway, and the other was a Sunday afternoon screening of Truly Madly Deeply at a little one-screen cinema on 8th Street near the village.

I recall at the time, critics called Truly Madly Deeply “the thinking person’s Ghost,” which to me does a disservice to this film, since they are so different. To be frank, this one is so much better, though fans of Patrick Swayze may disagree with me.

The film had a lot of success. Roger Ebert called it “a truly odd film, maddening, occasionally deeply moving.”

A little about Anthony Minghella:

He was born on the Isle of Wight in 1954, his father was Scottish/Italian and his mother Italian. Through the ’70s and ’80s he made a living in the UK as a playwright and a television writer. In 1978 he directed a 55 minute film called A Little Like Drowning.

In the late ’80s he’d been writing a TV show called Inspector Morse, which had been a big success over three seasons. He really wanted to be a director, and the chance came to direct an episode of Inspector Morse at the same time an opportunity came from the BBC to make this very low-budget film he’d written. He was deeply afraid of screwing up his first directorial effort, so he chose to direct his own script, figuring there was much less chance of anyone seeing it.

Many people in Hollywood saw it. After Truly Madly Deeply, Minghella went to Los Angeles as a director for hire, and he directed a Matt Dillon romantic comedy called Mr. Wonderful, which he did not write. I hear it’s quite good, but it’s the one feature film of his that remains unseen by me.

After that he collaborated with Michael Ondaatje to adapt his book The English Patient, which of course went on to win Best Film and Best Director for Minghella at the Academy Awards in 1996. That was his third feature.

Mingella adapted other books in his directorial efforts, notably Patricia Highsmith’s The Talented Mr Ripley and Charles Fraizer’s Cold Mountain. He also got into producing, including The Quiet American, Michael Clayton and The Reader and directed the pilot for the TV series The Number 1 Ladies Detective Agency.

Minghella’s final film as director was also his only feature, aside from Truly Madly Deeply, to be made from his original screenplay. It came out in 2006 and it’s called Breaking and Entering. Also set in London, like Truly Madly Deeply it touches upon the immigrant experience of the city. In this case Jude Law plays a wealthy architect who gets involved in the lives of a young thief and his mother, played by Juliette Binoche. It’s ambitious and affecting, and worth seeing, though I don’t think it works quite as well as his first film does. It’s one of those cases where instead of a unified tone it’s a bit all over the place.

Anthony Minghella died in London in March 2008 following cancer surgery. He was 54.

Presumably his last credit, Minghella was one of the writers of the Rob Marshall musical Nine. His son Max is an actor, who recently was seen in The Social Network. He played Divya Narendra, the business parter of the Winkelvoss Twins.

Royal Shakespeare Company graduate. She and Alan Rickman acted together in an RSC production of The Tempest in 1978. I saw her in the play Burn This with John Malkovich in London in 1990, she was amazing. More recently her film work has included parts in Emma, Bend It Like Beckham, Mona Lisa Smile, Infamous and she was also in Breaking and Entering.

Most folks will recognize Alan Rickman.

He was the British Shakespearean thesp to fill out the roles of the bad guy in Hollywood movies like Die Hard and Robin Hood: Prince of Thieves. He really created the image of the flamboyant Euro-villain in Hollywood movies who’s much more fun than the hero. He’s also well known these days for portraying Snape in the Harry Potter movies, and was in Dogma, Sense and Sensibility, and recently was the voice of the caterpillar in Tim Burton’s Alice in Wonderland.

His role in Truly Madly Deeply remains my favourite of his many achievements.

Previous to this film, Minghella had done a lot of plays set in London, lots of kitchen sink realism. But he’d also done writing for the Jim Henson Company, material that was fantastic, based on fables. He said that those two influences informed his script for Truly Madly Deeply, a way to combine realism with a more imaginative arc. He also said that the inspiration for the film wasn’t something that occurred to him at the time, only in hindsight.

Another thing Minghella remarked upon is when writing it, he thought he was writing a romantic comedy. Nina’s pain, so well illustrated by Juliet Stevenson, brought the film into an entirely different place. He said that after its release he discovered The British Association of Psychoanalysts was using it as a counseling tape for the recently bereaved. “It started to be circulated and had a life of its own,” he said.

He also admitted the film was loathed for precisely those reasons. He says people reject it because they can’t get with the emotional deal it projects.

Just briefly, I’ll tell you why I like the film so much and why I chose it:

It’s unpredictable: I didn’t know where it was going or how it was going to resolve itself. Even watching it again, I wonder, how is she going to let go of this guy that she loved so much? And I love how since it all takes place in Nina’s apartment, the supernatural elements never need be addressed, since no one else really knows what’s going on. It could all be in her head.

I also like that it throws in all these supporting characters, all of whom are entirely complete in their own way. Even Nina’s sister and nephew, who only have two scenes and don’t bring an enormous amount to the plot, help fill out the corners of it. Nina’s life is messy and full and, if she weren’t so bereaved, you could see how she might be quite happy with her friends, her family, and her work.

I like the central conceit: Jamie is back to help Nina get over him. This was something I hadn’t twigged to until I watched the director’s commentary. I mean, I knew that was Jamie’s end intent, but Minghella says that Jamie has a plan from the very beginning, and he sticks to it.

He wants to frustrate her enough for her to let him go. While watching it myself I didn’t realize this, but it’s true, it’s there. Minghella points to the scene where Jamie is watching over Nina while she sleeps. He wakes her up by singing Bob Dylan and Buddy Holly to her, pouring the glass of water on her face. At the beginning of that scene, you can see it. He’s so glad to be back but he’s in pain since he knows it can’t be like it was.

I’ll also say that I love the grace with which Minghella handles tone. At one moment it’s tragic, then it’s hilarious and romantic, and it never feels forced to me. I also like how it really uses the London exteriors well. I love Nina and Mark’s first date along the South Bank, and when Nina and Maura walk around Primrose Hill.

Finally, I think why it works so well for me is Juliet Stevenson’s performance. She gives the best crying scene EVER in film, as far as I’m concerned. She’s so present and believable, I kind of fell in love with her myself.