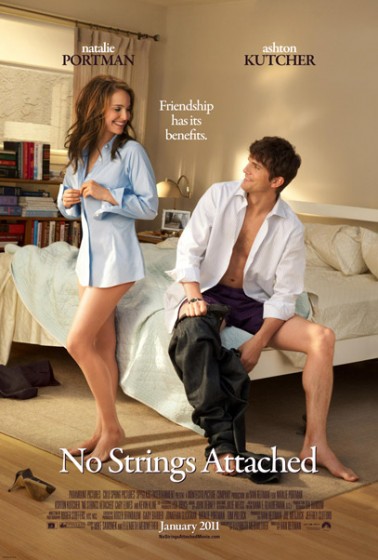 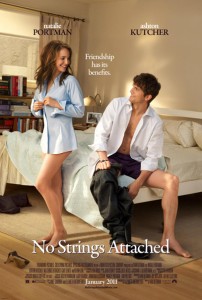 They could have called this movie Friends With Benefits. In fact, I think that was the working title of this picture. However, there’s a movie with that title coming later in 2011, starring Justin Timberlake and Natalie Portman’s Black Swan co-star Mila Kunis, about two friends whose relationship gets complicated when they hook up.  Then there was Love and Other Drugs, about a couple who tries to keep things simple and only sexual, but find they have feelings for each other the longer they keep doing the thing they do. I think three movies with startlingly similar plots indicates a trend. It certainly shows women taking ownership of their sex lives in a fresh way for Hollywood romcoms, though it seems that they are not invulnerable to the more typical romantic comedy formulas that have everything getting all cozy and exclusive by the end. Still, it’s worth noting.

In this one, Natalie Portman is Emma, a strange woman who is doing her medical residency. I say strange because she asks a guy on a date to her father’s funeral, not mentioning to him what he’s in for, so he doesn’t dress appropriately at all. If I was him, that would be enough to make me run screaming.
And it’s never quite explained, just one of her charming quirks. The guy in question is Adam, Ashton Kutcher in big, big puppy dog mode. I have to acknowledge, he’s a likable screen presence, but not hugely interesting. Does his character have any taste, or hobbies, or interests? I mean, aside from women and his job? Apparently he’s an AD on a very Glee-like show but in fact is a talented writer. Really? Then where’s his wit? Or at least morose self-hatred?

Emma’s interests are in becoming a doctor, kind of all-consuming. Adam is interested in Emma. So, after a sudden and unexpected sexual encounter, they decide to have an arrangement. She doesn’t have time for much else, but she is a woman with needs, so he agrees to be her “friend with benefits.” Ground rules include: no snuggling, no jealousy. No listing the other as an emergency contact.

The set-up is pure high concept. And the comedy, though intermittent, does hit in places. There’s a great scene where Adam shows up at Emma’s apartment with cupcakes when she and all her roomies have their periods. I can’t recall that much humour mined from menstruation in a movie… well, ever.
That’s refreshing. And though there is a fairly predictable arc to the way things play out, it’s not grossly contrived like, say, a development in the afore-mentioned Love and Other Drugs.

As it went along I started to warm up even more to the characters as opposed to getting sick of them, which is something to say for a romcom released in January. An old hand at mainstream comedy,  director Ivan Reitman deserves some credit for this, I’m sure. Also Natalie Portman,—waiting to be anointed Best Actress for Black Swan (does anyone think Annette Benning can take it from her?)—is really game for this part. Props to her for going for something outside her usual dramatic choices.

Also, a hand for screenwriter Elizabeth Meriwether for cleaving to the Richard Curtis school of romantic comedy writing: For one, make it R-rated. (Though there’s much less of the sex that so enlivened Love and Other Drugs, at least there’s people talking about it openly.) For another, just in case your central couple isn’t super-interesting, try to surround them with a colourful supporting cast. Here, lots of credit must go to Greta Gerwig, Lake Bell, Olivia Thirlby, Ludacris, Jake M. Johnson, Mindy Kaling and Ophelia Lovibond for playing various lovers, friends and family of the non-couple couple, all of whom get solid comedic moments and fully fledged characters, helping the central romance exist in a recognizable world. Which is one of the film’s best features.

However, points get taken away for wasting the amazing Kevin Kline, who plays Adam’s father, Alvin, a former TV star. The fact of his former fame is hardly indulged, and it could have been. Couldn’t we have seen a clip of his old show with it’s “Great Scott!” catchphrase? Or at least have given Kline more to do? He’s one of the few actors in the past 20 years to win an Oscar for a comedic role (in A Fish Called Wanda). Just set him loose for chrissakes! And another talented comedic actor is wasted, too, the almost unrecognizable Cary Elwes, who plays a doctor at Emma’s hospital. He has, what, a line? This is the guy who was in A Princess Bride! Give him something to say!

Bottom line? Better than it needs to be with a few genuine moments, but it never quite cracks the formula.