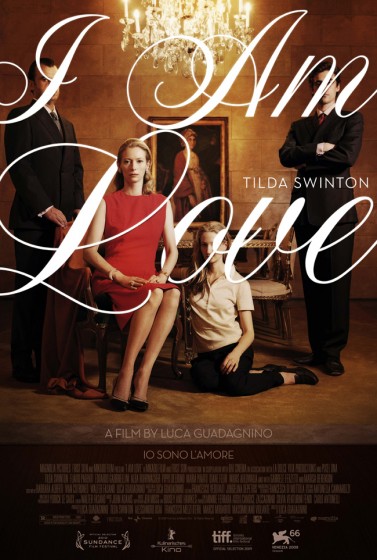 Sometimes watching a movie can be like sitting in a classroom. It can be homework. It can also be a party, a rollercoaster ride, skydiving, an awkward conversation. And every once in awhile, a movie can be like someone licking you where you like to be licked. I Am Love falls quite firmly into that last category.

We meet the Recchi family, aristocratic clan of Milan Italy, in winter. At their enormous, austere family home they are celebrating the birthday of the patriarch who built his fortune on textiles. He wants to pass on the running of the business to his son Tancredi (Pippo Delbono) and grandson Edo (Flavio Parenti). Observing all of this is Tancredi’s bride, Emma (Tilda Swinton). Russian by birth, she has been enveloped into this family, but withholds her thoughts and feelings. Her role in all of this is staged and set and she plays it well.

We get to know her son, Edo, and her daughter, Betta (Alba Rohrwacher), both of whom have ideas of life different from their parents’ generation. But as we leave the dinner table and roam through the beautiful house, winter turns to Italian summer, it becomes Emma’s story. She is enamored with a business partner and friend of her son’s, a chef named Antonio (Edoardo Gabriellini).

This is an absolutely beautiful looking and sounding movie. I suspect the director and DP Yorick Le Saux were influenced by Italian master director Bernardo Bertolucci and his partnership with Vittorio Storaro. It’s just so grand and luscious, as are most of Bertolucci’s films. The camera notices fragments of colour, movements. It swirls and swoops. We hear Emma’s breathing. Her discovery of Antonio’s cooking is a gorgeous moment, as she devours a prawn dish—”prawnography” as Swinton herself has described it. The sensuousness seems to overpower the dialogue, even the plot in places. On Emma’s journey, we understand how the shell of her existence in this family is cracked open. She sacrificed her Russian identity to become a Recchi, but as she discovers her feelings for Antonio she leaves that identity behind. She metamorphoses.

Swinton is astounding in the film. Set aside the fact she learned how to speak Italian for the role, presumably with a Russian accent, she absolutely channels this character. It doesn’t require much dialogue, but you know from moment to moment what’s going on with her.

Utterly compelling throughout, if I had to raise a criticism of the film, it was in the last 20 minutes. An unexpected tragedy changes the course of everyone’s lives, and forces Emma to reveal her true feelings. The sudden melodrama makes sense, especially synched with the amazing John Adams soundtrack, but it felt jarring following the hypnotic beauty of the first two acts.

Still, easily one of the year’s best films. The story of a Norse warrior shot entirely in Scotland, Valhalla Rising is going to impress some and confound a few.

One-Eye (Mads Mikkelsen) is a mute prisoner of a nomadic highland tribe circa 1000 AD, forced to fight other prisoners to the death, which he does with much success. The subject of precognitive visions, he sees an opportunity to free himself and takes it, slaughtering everyone but a boy who treated him with kindness (Maarten Stevenson). The odd pair are taken in by Christian warriors, intent on finding the Holy Land. A journey by boat becomes horrific when an impenetrable fog surrounds them, and the superstitious men blame the heretic One-Eye and the boy for their predicament. They finally arrive in what looks to be North America, but are attacked by arrows launched unseen, and begin to suspect they are in hell.

As the film progresses we get the story through six chapter titles, a Kubrickian stylistic trait, though not restricted to him. Director Winding Refn is Danish, so maybe the implicit narrative discomfort and peculiar camera angles speaks to a Lars von Trier influence, but probably more so German director Werner Herzog. Whatever it is, Winding Refn has created a particularly unique film, one that is both brutally violent but beautiful, with his stolid characters framed against the bleak Scottish landscape. Issues of the growth of Christian influence, faith versus realism, piety and paganism, there’s plenty of abstract thought here to read into. But it’s not the kind of picture that demands it. It just washes over you, every shot an on-site exterior (with perhaps the boat scenes an exception). Bleak, yes, but also beautiful, it will reward someone looking for a different cinematic experience. Finally I catch up with one of the summer blockbusters that slipped in and out of theatres when I was travelling. I recall reading that Salt was going to be a project starring Tom Cruise, but that the lead shifted genders when he dropped out and Angelina Jolie got involved. I’m sure it would have worked just was well with Cruise, but there is something especially chilling about a woman watching her husband die for the sake of duty. That’s not something you see in action thrillers very often.

If you’ve seen the trailer you know the set-up. A Russian agent walks into a CIA building in Washington DC and accuses a well-regarded agent, Evelyn Salt (Jolie), of being a sleeper for the Soviets, and that she will kill the Russian president visiting New York that week. Ah, shadows of the cold war, even in 2010. She’s been held prisoner by the North Koreans, so she’s seen bad times, and never faltered in her duty to the US of A. Her superior Ted Winter (Liev Schreiber) goes to bat for her, but internal affairs officer Peabody (Chiwetel Ejiofor) wants her grounded while they figure things out. But motivated by the love of her arachnologist husband (August Diehl), who she figures is in danger, she breaks out of the building in a style familiar to anyone who’s seen the Bourne movies.

And we’re off. The plot rarely slows down long enough for us to question all the sub-James Bond implausibilities, which is a good thing. And just when you think you’ve figured out Salt’s motivations, we get another flashback and another reveal. If you’re like me, you’ll probably be a step ahead of the “twists”, but will be engaged nonetheless.

I wished I cared more about everyone involved, but that would have required more set-up or a denser script, and maybe then it wouldn’t have worked at all. It is the rare action movie that really sings in the last act rather than the first, so that’s to its credit. As passable escapism and connect-the-dots action it works, that I can’t deny, but there’s not much to love.