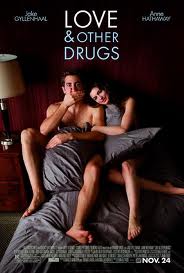 Directed by Edward Zwick
Written by Zwick, Charles Randolph and Marshall Herskovitz
from the novel Hard Sell: The Evolution of a Viagra Salesman by
Jamie Reidy

I’m surprised that Love and Other Drugs is being buzzed about with potential Oscar consideration. Maybe the performances have a shot, but I’d say it’s a long one. I suspect the association has more to do with Anne Hathaway being announced as co-host of the telecast.

Here I am, kind of beating it up already, and it doesn’t quite deserve a beating.  Maybe just a slap or two. Because it really did start promisingly and it does offer a number of incidental pleasures along the way.

It’s 1996: Jake Gyllenhaal is Jamie, a fuck-up in a hyper-achieving family.

(And, incidentally, you get heavyweight performers George Segal and Jill Clayburgh as the parents and you give them a single scene. Really, Mr. Zwick? What the hell were you thinking?)

Jamie’s a born salesman who takes a shot at pharmaceuticals, Pfizer just before Viagra broke. He heads out to Ohio somewhere, to pair up with Oliver Platt’s Bruce, a veteran pill salesman. If the sales go up they get Chicago, but it’ll take some hustling, like getting into the good books of a local MD, played by Hank Azaria. For Jamie, that means sweet talking—and bedding—the staff at the clinic, specifically the delightful Judy Greer, still looking for a role worthy of her talent.

So far, so interesting. We have a playa with issues finding something he’s good at as well as a potentially satiric jab at Big Pharma through the eyes of an insider. Like Jerry Maguire, except with pills instead of football.

Then Jamie meets Maggie, essayed by the gorgeous Anne Hathaway. Yes, she is, and while I’m certainly not going to deny Mr. Gyllenhaal’s aesthetic assets, she’s really something.

Maggie has early-onset Parkinson’s, which makes her particularly defensive and non-committal as she’s been stung by guys in her past not wanting to be with the sick girl. Since Jamie’s kind of emotionally arrested, it makes for perfect physical chemistry sans emotional investment. Except you know Jamie’s going to get hooked. That’s a given. And, you know, if he sleeps in his car just to see her first thing in the morning when she gets back from a long bus trip, he’s going to break down some of her barriers, too.

Still, this is pretty good stuff. Hathaway and Gyllenhaal are eminently watchable, especially as they have a lot of sex.

Now, you may accuse me of being a cad, but one of the real problems with Hollywood since, I dunno, the ’70s, is how prudish its become. Aside from a few sex thrillers here and there, the resistance to offend and risk the dreaded R-rating means stories of adult relationships don’t include a lot of sex or nudity. If they do, it’s done self-consciously, with demure post-coital scenes where everyone’s bits are strategically covered up. I find it very irritating. And a good sex scene is hot and brings some weight and realism to a drama or comedy. Now, I understand why, as Natalie Portman argued so reasonably, if you show your boobs on film they’ll get repeated into infinity on every sleazy website out there, and that bothers her. And I have heard women say they feel upstaged by their own bodies on film. But I think, especially in this context, the nudity is totally justifiable.

Now I’m not saying we see full-frontal in Love and Other Drugs, but the performers are both fairly immodest, and it is a pleasant change. And, whaddaya know, it does allow for more engagement in Jamie and Maggie. Their connection is more tactile, believable and rewarding.

But as they become more involved, the film begins to slide into predictable romantic-comedy territory.
Damn it. Up to this point, I was thinking it was being pretty deft in handling the mixed tone. Even as it seemed in danger of being a disease-of-the-week tale, it wasn’t. Even as Jamie’s incredibly annoying younger brother, tech millionaire Josh (played by Josh Gad with absolutely no charm) shows up in too many scenes. None of this capsized the winning story of two kinda stunted but sexy people finding each other despite their fears and the very real life issues that chronic illness can bring. I was starting to think it had a chance to be an alternate take on last year’s Up In The Air, with a younger, hornier couple.

But no. Director Zwick, up to now known for his grand spectacle filmmaking such as Glory and The Last Samurai, climbs right into the formula romcom tree, grabbing every cliche branch on the way up, including the one where some fairly contrived obstacle has to come between his couple so they break up, only to give them a chance to reconcile at the end. I resented those plot devices, just as I resented there was no real sense of place, no real time with Jamie’s family who were so promisingly introduced early on. And I really resented the inevitable priapism gag, and Josh’s presence throughout.

But as I mentioned, we at least have the two leads, their smokin’ chemistry and gorgeous smiles, and that goes a long way. Seriously, this is real star power on display. (And not just for their bare asses. Really.)