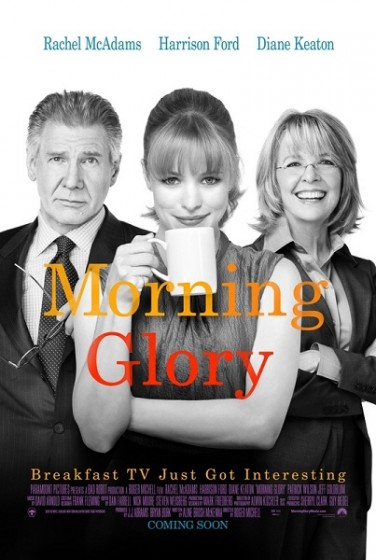 Sure, there was His Girl Friday and all those other deftly written and performed romantic comedies of a bygone era, the ones critics are fond of recalling and comparing with a substandard progenitor. But what Morning Glory especially reminds this audience member of is a slew of mainstream Hollywood entertainments of the 1980s, usually the tale of a put-upon but hard-working individual in a big city having his or her dreams achieved through hard work, talent, love and good, old-fashioned American ingenuity. Oh sure, most of them were lambasted as claptrap at the time, with the occasional hit rising up. Go rent Working Girl, or some of those Ron Howard movies of the era, Gung Ho or Night Shift. These are feel-good adult entertainments, comedic, the adventures of a plucky hero or heroine in the urban jungle. There was also Broadcast News, which had many of these same tropes, but managed to be much better, prophetic in its look at modern American media, while still spinning a gorgeous and affecting love story inside it.

Morning Glory, directed by Notting Hill and Venus‘s Roger Mitchell, stars Rachel McAdams, who has all the attributes of an American Sweetheart, despite being Canadian. I suppose it’s kind of unclear whether today’s America needs a sweetheart anymore. Amy Adams was perfect for the position, but are there still movies for these women to work in that will provide them with that kind of cultural currency? Maybe on TV.

Here McAdams is Becky, a producer at a New Jersey morning TV show who’s expecting to be promoted. She instead gets the boot, and through an adorable montage of her pestering potential employers, she gets an interview with a network that carries the fourth-place morning show. The man in charge upstairs, Jerry (the charmingly off-centre Jeff Goldblum), appoints her new executive producer, a job she’s wanted her whole life. Of course, trying to raise the ratings of the show and deal with the personalities therein is the real problem: After dispatching one of the on air anchors, she uses a contractual loophole to hook a newcomer to morning television, an award winning former serious TV news journalist, Mike Pomeroy (Harrison Ford, about as cranky as you might imagine him being in real life). Of course, he hates the idea, and his new co-anchor, former beauty queen Coleen Peck (Diane Keaton, a pro as always).

So far so good. The soundtrack is charming, the set-up good, and McAdams is so winning we’re totally on her workaholic side, and New York looks wonderful. They even have time to provide a love interest, Adam (Patrick Wilson as hunk-du-jour). As I say, so far so good.

The movie peaks just around the time the ratings go in the toilet: Becky decides the only way to save the show is to make it sensational, which amounts to her strapping the weather guy into a rollercoaster and the cockpit of a stunt plane (as if the insurance on the show would have covered that, but whatever) and letting her anchors go off on each other. It’s hilarious stuff, and the movie really catches fire.

Unfortunately, the final act gives the love story a really contrived obstacle and thus deadening that entire subplot. It also rushes final scenes already oozing with gooey sentiment. Of course everything works out for Becky, that’s no surprise, but the predictability of the rest of it really threatened my goodwill towards all the work of the performers.

It’s fun watching McAdams do her thing, so intense in this, as she is in everything. I find her a much more tolerable presence in mainstream movies than, say, Reese Witherspoon or Katherine Heigl. And Ford and Keaton have fun with their parts, too. There was room in those roles for a bit more drama about aging in front of the camera, but I didn’t mind too much that they didn’t go there. Finally, when is Jeff Goldblum going to get his due? He’s becoming a more interesting screen presence every year.

So, yes, it doesn’t quite reach the quality of a Working Girl, and languishes far behind the Broadcast Newses of the world, but there is enough interest here to include Morning Glory in the same field as those pictures.