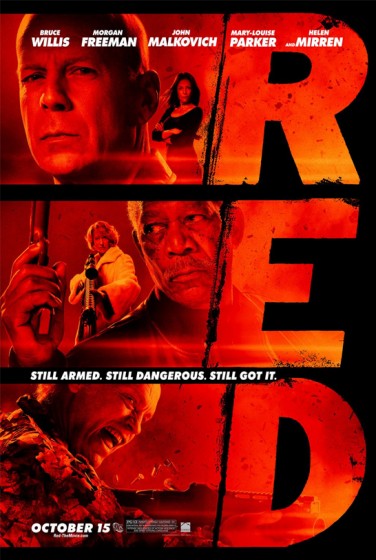 I gotta say, with this cast on board, I was pretty excited to check out RED. I mean, this may be the cast of the year, with apologies to The Expendables. You’ve got Helen Mirren, Bruce Willis, Brian Cox, Morgan Freeman, John Malkovich, Mary-Louise Parker, Karl Urban, Richard Dreyfuss, Rebecca Pidgeon and Ernest Borgnine, who is older than baseball but still brings in a touch of The Wild Bunch into this ensemble. It’s kind of perfect.

But as I sat down and collected my thoughts of the movie three days later, I can’t say I remember much about it. That isn’t a good sign. I know I had fun at the movies, I know I enjoyed spending some time in the company of such a charming group of people. But the on-screen conversation was nothing to write home about.

This I can tell you. Bruce Willis is Frank Moses, former CIA black ops. He’s R-E-D, Retired but Extremely Dangerous. (Yeah, I know: pretty lame.) Someone is trying to kill him, and it has to do with a job he did in 1981 in Central America. The whos or whys aren’t of much interest, really, it just gives Willis a chance to kidnap Mary-Louise Parker’s character Sarah and take her on a trip all over North America, though not to Toronto, where much of the action was obviously filmed (look for the Royal York and City Hall to make cameo appearances). Though they drive everywhere, Moses doesn’t seem to need to sleep, and each locale is given its own postcard motif. It’s all so cheery, but about as deep as bathwater.

This isn’t the kind of film that you need to ask too many questions of. If you go along with the action, it will keep you amused, at least. Though she only shows up for the last act, Mirren brandishing an enormous machine gun is an amazing sight, especially as she’s so tiny and so sexy and so English. Her character’s even named Victoria. Malkovich does paranoid and wacky like no other, and Freeman is just so damn likable. Willis, at the centre of it all, is typically effortless.

But this is definitely the kind of picture that rides on the star power of its leads and not much else. As a result, it hasn’t much to recommend it besides that.