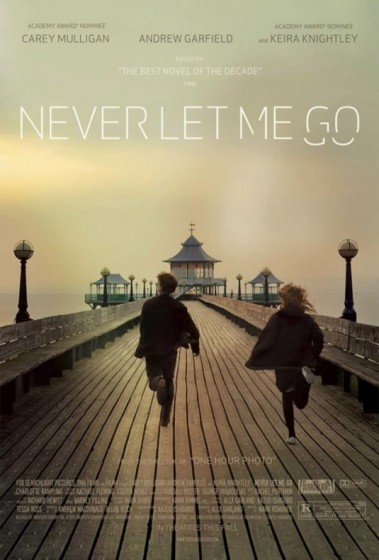 I was quite amazed at this film to start with, since I didn’t know much about it, only that the reviews were strong, as is the cast, and that it involved a love triangle. That it’s actually hard sci-fi may surprise many. It did me because it’s nowhere in the marketing. Just an interesting detail.  I don’t consider that a spoiler, just a plot descriptor that people should know going in.

Ruth, Tommy and Kathy (played by Keira Knightly, Andrew Garfield and Carey Mulligan, respectively, as adults) are bred to be organ donors. In a caption at the beginning of the film, it sets up this alternative history of British society; the incurable cured in 1952, lifespans extended into the centenaries by 1967. Then we have this exclusive boarding school in ’78, all these singing children, staying healthy, prepped for a brief life providing organs to a society that needs them by a stern Charlotte Rampling—always great to see her hooded eyes—and the more delicate Sally Hawkins.

The specifics of how this society came to accept this situation aren’t dwelled upon. We have to take a fair amount on faith. You’d imagine the religious right would be up in arms over this kind of thing, people playing God. But the story is exclusive to the lives of three children in a traditional love triangle. Kathy, the thoughtful, sensitive one, pushed out of the way by aggressive and desperate Ruth, who’s all grabby for the wetmop Tommy, his appeal mysterious. All three are naive, innocents, believing the lies and rumours they’ve been fed at school to keep them in line, chasing a fragment of hope.

It starts starchy, and takes awhile to warm up. The appearance of the adult actors onscreen helps immeasurably to bring the audience into the story. There’s a realism here that’s appealing, perhaps the most grounded science fiction since Timecrimes, maybe since Children of Men. The love story is the heart, the organ undonated that keeps it going.

Carey Mulligan does great work with a less showy role than Knightley, who is fine, though has trouble projecting emotional intelligence here. Surprising, since she was better at it in Atonement. Garfield is just a big puppy dog, and now, having seen him in two roles, still am not convinced he’ll make an appropriate Peter Parker.

The moral of the story, implicit, is made explicit in the final lines of dialogue, which disappointed me a little. Aren’t we better off figuring it out for ourselves, that we’re all are here for a limited stretch and our dreams don’t all come true. We have to find happiness, however fleeting, as it comes. That said, it is sweet, sad and moving.

Never Let Me Go was directed by Mark Romanek, adapted by Alex Garland from the novel by Kazuo Ishiguro. All interesting talents behind the camera, though someone looking for the emotional heft of Ishiguro’s The Remains of the Day won’t find it here. They will find a similar sense of longing and regret, just in a cooler emotional tone.