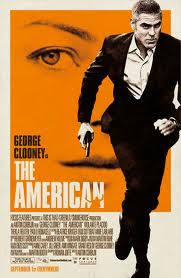 Ah, there’s nothing like a smart George Clooney thriller to make it feel like the fall, the season when Hollywood tends to deliver a more serious kind of movie. The American certainly qualifies as a serious effort. I can see it confounding some with its deliberate pace, but I found it to be a smart, sexy and adult picture, a welcome throwback.

We meet the mysterious Jack in wintry Sweden, where we get a taste right off the top of his ruthlessness in a suddenly violent situation. He retreats to Rome, where he meets up with his contact Pavel, who advises him to hide out in a small Italian town until the heat cools off.

In Italy his cover is Edward, a photographer. Despite Pavel’s advice that he shouldn’t make friends,
he quickly does: a priest named Father Benedetto, who seems a bit suspicious of his intent. Edward starts to see a local prostitute, the beautiful Clara. He also gets a new assignment, one in which “he doesn’t even have to pull the trigger.” He’s to provide a rifle to another assassin, Mathilde. As he starts to get comfortable amidst the gorgeous Abruzzo scenery, the Swedes are tracking him down.

Dutch director Corbijn—who found fame as a photographer of rock bands such as U2 and Depeche Mode before directing the Ian Curtis biopic Control—is working an interesting angle here. The movie is nothing like the glossy thrillers we’ve been seeing lately, jaggedly edited and explosion-ridden. Instead we get lots of interstitial moments, luxurious lingering shots of the cobblestone streets, snaky mountain roads, Edward’s deft fingers assembling the weapon with an expert’s grace. This has the pace of a ’70s thriller, the existential spirit of Walter Hill’s The Driver or a more austere, European take on The Mechanic.

The camera lingers long on Clooney’s impassive face, too. He’s lean, mean and muscular, having clearly lost some weight for the role, the lines around his mouth and eyes long and deep, his muscles jutting through the skin. The movie star sparkle and smirk we so enjoy from him are absent. He’s grim and forbidding, as if channeling Steve McQueen or Robert Mitchum. We get to assemble his character over scenes, understanding his paranoia and vulnerability in behavior, not exposition. And Clooney does great work.

I also enjoyed the relationship with Carla. Played by Violante Placido, Edward has plenty of reason to consider her a road to redemption as well as to suspect she’s working against him. They also share a particularly hot sex scene, which is great. Frankly, there are so few good sex scenes in movies these days, to have a great one is a real pleasure. Ahem.

If I had a gripe, it’s a small one. The butterfly metaphor. A bit obvious and heavy-handed, especially in the final shot. But, again, this is not a terribly subtle film, all told. And if there are few surprises in the script, it doesn’t prevent an appreciation of the craft of the thing, nor the atmospheric building of tension.

Something to ask yourself at the film’s end: At a crucial moment, a character meets an end falling off a rooftop. Was the cause of that fall intended, or accidental? And what does either possibility say about Edward?

This is an old-fashioned genre piece, and it’s going to seem like an antique to many, but in the right mood, it’s the cool breeze and sun through the yellowing leaves. Welcome to the fall, people.