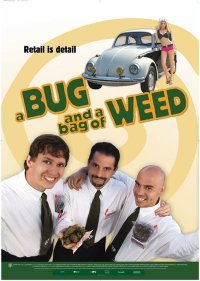 Just a heads up for my Halifax peeps:

The excellent independent film series Carbon Arc at the Khyber has been
bringing us all sorts of interesting films on Thursday evenings through the summer.
(Check out former Coast film critic Mark Palermo’s intro to Torque here.)

Tonight they’re showing A Bug and a Bag of Weed, a comedy shot in Halifax a
few years back, put together by Chris Cuthbertson and Drew Hagen.
Tonight’s screening will be presented by my friend, cinepanion, and potential
Flaw in the Iris contributor, Hillary Titley.

Here was my Love & Hate Movie Show take on A Bug and a Bag of Weed when it appeared in cinemas:

The story revolves around three computer store salesmen in their early 30s, in desperate debt. Nothing’s worked out for them, and bad habits keep them stuck in what they’re doing, from playing video games to spending their money irresponsibly. The bad decisions made by characters in the film intersect with the arrival of a vintage Volkswagen in their lives, as well as a large amount of marijuana, which suddenly complicates matters.

A Bug and A Bag of Weed was shot in the summer of 2005 in a Spryfield mall, where the filmmakers were able to build their computer store set, amongst other locations. It’s the kind of cultish comedy that will have anyone around here chuckling at its enthusiasm, gags and a certain intangible Nova Scotian flavour.