Our hearts and minds

Mark Palermo told me the Joker movie was a social Rorschach test and it’s true. I didn’t want to like it, but I did. And now the stakes seem so high.

When Joker won the Golden Lion at the Venice Film Festival the stakes already felt too high. The second wave of critical response recoiled, seeing that critical approval as having blessed the cynical and potentially toxic product of charlatans. There was an impact assessment of the potential cultural damage. Some saw it as Trumpism, others a Leftist victory.

The New Yorker’s Anthony Lane sums it up like this: “In one corner are those who crave a masterpiece: a film that will unearth a new psychic intensity in the domain of the comic book, ideal for our distended times. In the opposite corner are those who fear that Phillips and Phoenix may give license to all the lonely people out there—in particular, to any messed-up white guys who feel wretchedly uncherished and would welcome a tutorial in the art of lashing out.”

Now that “normal people” are watching Joker the stakes feel even higher. When a movie becomes popular it can feel like the 2016 US Election all over again.

Our highest values have become exchange values. This is how some contemporary thinkers sum up our increasingly bizarre postmodern age. Social norms and moral values are renegotiated every moment to respond to cascading crises or opportunities, often involving money.

Genre movies, like westerns or science fiction, adapt to postmodern weirdness, flexing and morphing overtime, but staying recognizable. On the other hand, Watchmen, The Dark Knight, Chronicle, Persepolis, Logan, and Super, among others, have shown “comic book movies” are shapeshifters or pastiche. In the case of Joker, the “comic book” aspect is a symbolic haze or spell cast over the movie. Otherwise, Joker wouldn’t be a comic book movie at all.

Much has been written about its themes already. They’ve resonated in one way or another. Is it too much to say that this Joker movie is a groan from the cultural zeitgeist, even if it’s shallow?

“I wrote ‘Fuck You!’, but I deleted it because you can’t say that kind of thing.” “I just feel like no one can do anything without getting slaughtered out there. I’m just so fucking sick of it!” I heard these things said during Thanksgiving weekend by totally normal people talking about completely normal things. Read the lyrics to Five for Fighting’s Superman and tell me this resentment wasn’t hidden there the whole time.

Betting on the Values Marketplace

Lindsay Ellis’s recent video essay “Woke Disney” dissects how it cleansed its catalogue of problematic materials through either reediting or remaking. It’s part of its strategy to dominate the social values marketplace. Disney (and by extension Marvel) has successfully planted a flag in progressive social values without ever really needing to address those aforementioned problematic materials. Consumers expect companies to take moral stands these days, but as Ellis points out, the lesson of these properties remains the same: There’s nothing wrong with the system; only with individuals who lash out. Social strife is only ever superficial.

In Joker, a whole city goes completely “mad” along with a single person.

In Romantic and Gothic literature, the external world often reflects the internal states of the protagonists. The environment sympathizes with them. The terrible storms and thunderclaps express the rage and anguish of Frankenstein’s creature. The storms, wolves, and rats are an extension of Dracula’s corruption.

“I’m not political,” the Joker persona claims during a TV interview. What line could possibly draw more lightning or eyerolls in 2019?

In the world of Joker, no system works, no values have real meaning, nothing resolves or recovers. Even the clown-masked protesters and their slogans look like cliché placeholders for civil frustration. But as a viewer, you can’t trust anything you see or hear in Joker, not even the protesters’ signs.

Joaquin Phoenix’s Arthur Fleck (Joker) constantly feeds us naive and idealized “unreality.” His jokes, ideas, plans, romantic dialogue, and even his “monologue” are appropriated from things he hears from the other toxic citizens of Gotham. Arthur reflects them back. Hildur Guðnadóttir’s score often forms the sympathetic link. Depending on what you see in the Rorschach test, it could all be too self-serious. 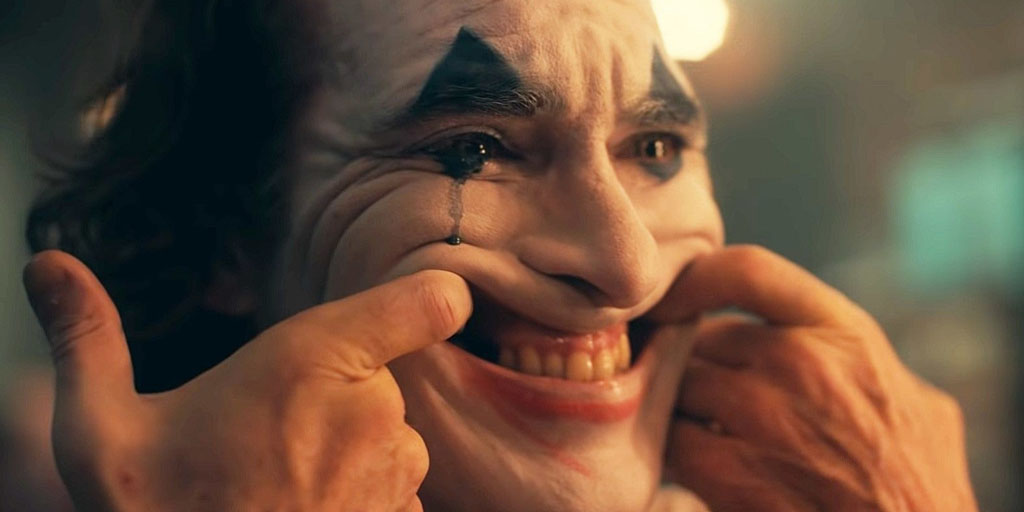 Joker opens with Arthur Fleck pulling his white-painted face into the contortions of the Greek theatrical masks of comedy and tragedy. Director Todd Phillips’ symbolism is direct. Like other blockbuster genre movies, Joker doesn’t want you to miss anything. “Sad clown” is a symbolic shortcut.

Phillips and the Ancient Greeks like social torture porn, where the world crushes everyone under its heel. In Euripides’ tragedy The Bacchae, much like in Joker, the city of Thebes is driven mad by the demigod Dionysus, who violently demands recognition. Dionysus is the god of ecstasy, wine, and dancing, often representing our need to find a balance between prudence and our more “bestial” and dangerous impulses. When you ignore the latter it’s a catastrophe. Phillips’ career has been an exploration of our destructive indulgences. Road Trip, Old School, and The Hangover were all comedies of distasteful bro-ey pathos and escalation, all grime, hostile, and on the verge of chaos. His shift to tragedy makes sense.

The Bacchae closes with these lines:
“The gods appear in many forms,
carrying with them unwelcome things.
What people thought would happen never did.
What they did not expect, the gods made happen.
That’s what this story has revealed.”
It could have been written yesterday.

The Death of Pentheus

In his Confessions, Saint Augustine tells a story about when he stole some pears as a child: “I did not desire to enjoy what I stole, but only the theft and the sin itself.” My enjoyment of Joker is like that. It’s problematic, I know.

Almost a decade ago, my wife and I caught a screening of Srdjan Spasojevic’s A Serbian Film. It was packed: It’s the most disturbing movie ever made. A woman got a concussion when she ran out of the theatre. Someone vomited. Ken Russell was there!

Afterwards folks gave confused eyebrows to each other: “Holy. Shit. That was pretty fucked up.” The screenwriter, Aleksandar Radivojević, bathed in its notoriety going into the Q&A. Exhausted, we nodded like cult members as we heard how the Serbian film industry was obsessed with stories about “children counting matchsticks” with no emotional outlet for the cultural traumas of the Bosnian War and genocide. For him, the aptly titled A Serbian Film was a backlash to a fantasy about civil virtue. It was a “fuck you” movie.

One audience member was dying to know: What did Ken Russell think? Now in his 80s, he gave it a big thumbs up: “Disgusting!” He meant it as a compliment.

I asked my wife recently if she remembered A Serbian Film. “Of course,” she grinned and then grimaced. She liked it but feels guilty about it. I asked her if she thought that movies like that should exist. “No,” she laughs. “But I was raised Catholic.” 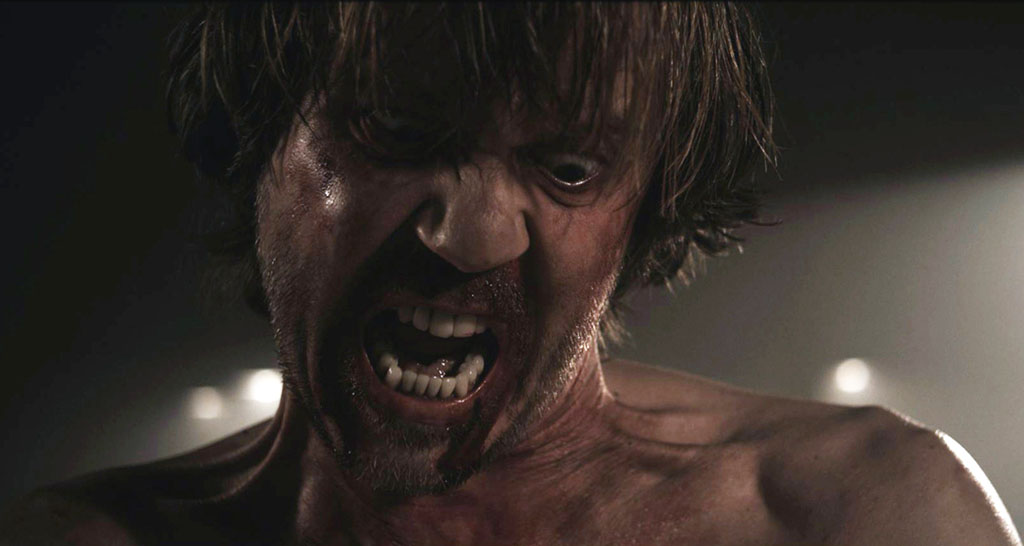 Ugly movies often make us recoil at what we hate about our own culture. Joker is the comic book version of a fuck you movie. Even though its trolling is fairly weak, it is calculated down to the song choice.

I’ll admit, the second a critic clutched their pearls I knew I wanted a taste. It’s problematic, I know.

Joker ends as Arthur and the city embrace their destructive Dionysian frenzy. It’s a modern tragedy designed by committee.

The disturbing part for me is how a character like Batman would fit into this vision of Gotham. Batman doesn’t write mental health policy or work on inclusive economic growth. He’s a traumatized millionaire violently restoring order in the name of justice and revenge. His side-kick is his butler. I’d watch that movie too, even though it would be gross.

It has been argued that superheroes are fascist symbols of our desire for meaning, salvation, and stability beyond “the system.” Joker’s intentional symbolism may not run that deep. But all the critics are right: It means more than it means to.

“Those kinds of stories”

When I was teaching, I knew an awkward young man who felt actively socially excluded. It didn’t help that his frustrations were being harnessed by toxic online communities. He was certain of his enemies and their ideologies. The mainstream worked with them against him. I discussed and debated with this young man for a few hours, but to what end? How do you convince someone to see their own life and ideas differently? Another Rorschach.

I understand why folks don’t want to see “those kinds of stories” anymore. There are many myths, plays, novels, and movies about so-called “losers” feeling hard done by the world and lashing out. And, of course, there’s all the social impacts from the crimes perpetrated by alienated white men. Those kinds of stories are everywhere too.

I wondered to myself what that guy would think of this movie. He’d probably complain the Joker shouldn’t have a backstory.

Like the ancient gods, the cultural zeitgeist never shows us what we want. 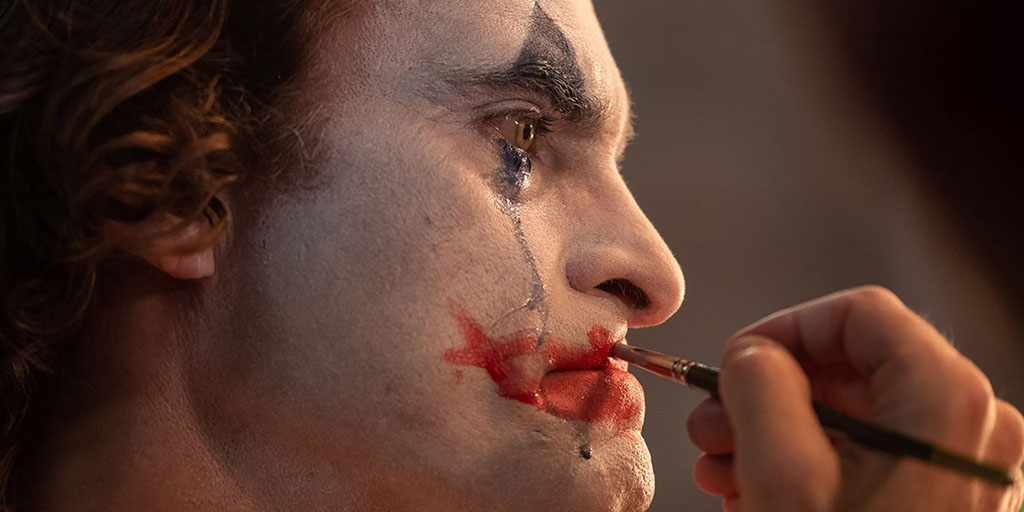 For a different perspective, check out our film blogger Carsten Knox’s review of Joker on Flaw in the Iris.