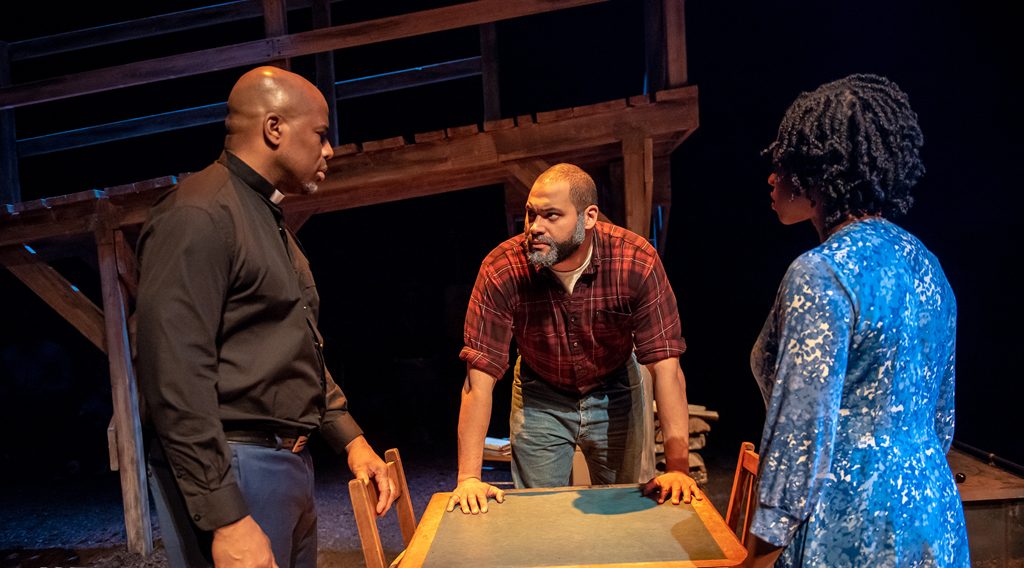 There’s a world of hurt at play within The Bridge’s complicated microcosm. A partnered production between Halifax’s 2b theatre and Toronto’s Obsidian Theatre, a vivid world penned by playwright Shauntay Grant explodes to life at Neptune Theatre. Directed by Anthony Black, The Bridge weaves a world chock-full of intricate deceit and motive against a rural Black Nova Scotian backdrop. Bad blood runs rampant, gossip flows freely, and glimpses of truth enticingly flicker before retreating beneath the surface. It’s a seductive study of complicity, punishment, and fault that continuously unpacks more and more questions.

In its heart, The Bridge is a constant pursuit for truth. For young Samuel Solomon (Daniel Ellis), honesty is a rare commodity. Raised by his withdrawn, volatile, and gin-guzzling father John (Jacob Sampson), Daniel just wants to learn about his mother Anna (Sophia Walker), who died in childbirth. His attempts to tease the truth from his tight-lipped father are perpetually stymied. Likewise, visits to his kind, lyrical uncle/reverend Eli (Jim Codrington), too, are cryptically forbidden by John. Lacking pieces to solve his puzzle, Daniel stumbles through life lost. It’s a tricky feat to go into greater detail about a piece of theatre so taut; secrets here are so tightly wound together that to reveal a major plot point runs the risk of turning this review into one major spoiler. 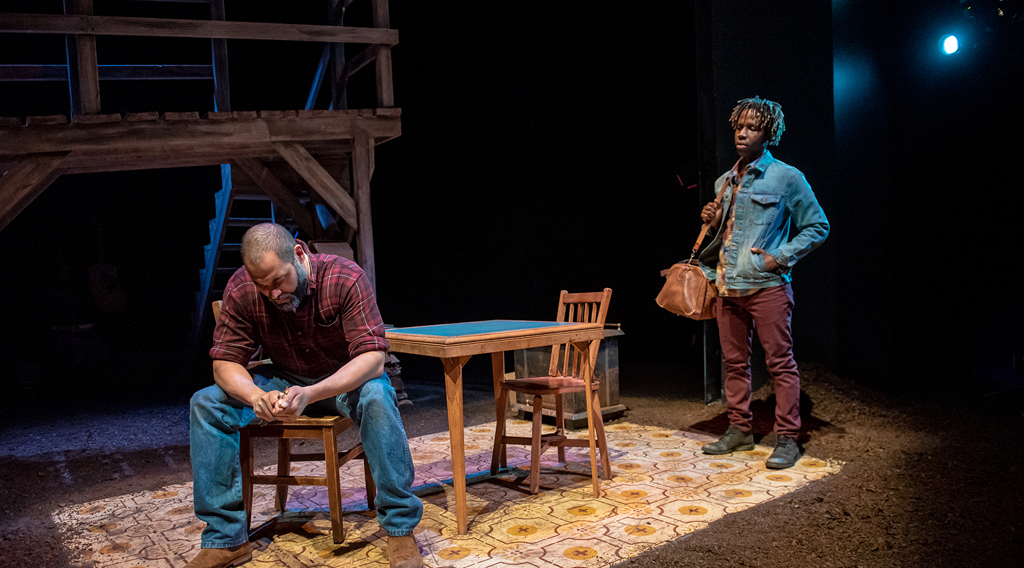 In terms of performances, Sampson is the star of the show. Theatrical dynamite, Sampson assumes the daunting role of the embattled John Solomon to perfection; watching him shift effortlessly through an onslaught of emotions is testament to his talent. Whereas his volcanic rage made audience members jump from their seats, warm moments of a happy, loving John were devoured by the crowd. Daniel Ellis makes an impressive 2b/Neptune debut, infusing his rendition of Samuel with a mixture of wounded confusion and unexpected playfulness.

The onstage relationship between Eli and Anna deserves special directing mention. Director Black masterfully steers Codrington and Walker with nuance, helping Anna and Eli understand, for the first time, the true definition of unconditional love. Codrington excels as an anguished father figure to Daniel while Walker gives a “spirited” performance as a fragmented wife plagued by breast cancer and marital transgressions. The additional incorporation of the three choristers (Chiamaka G. Ugwu, Murleta Williams, and Charla Williams) provided an amusing break to The Bridge’s melodramatic tension, though their appearances in the show’s last act detracted from a timelier, potent conclusion.

All told, The Bridge provides ample proof that bridges can be both burned and rebuilt. It is as much an allegorical reference as it is a metaphor into issues of a more secular, intimate nature. This fine piece of theatre does admirable justice to the hard-hitting, sophisticated world forged by playwright Grant. The Bridge succeeds because it appeals to all the wonderful and inescapable facets of the human condition. For all of the trespasses, tests, and tribulations thrown our way, it is ultimately our decision of how we choose to react and respond. It is rare to find fault in both a script and performance that so solidly entices viewers from start to end with organic twists and surprises. For me, that is a theatrical rarity.