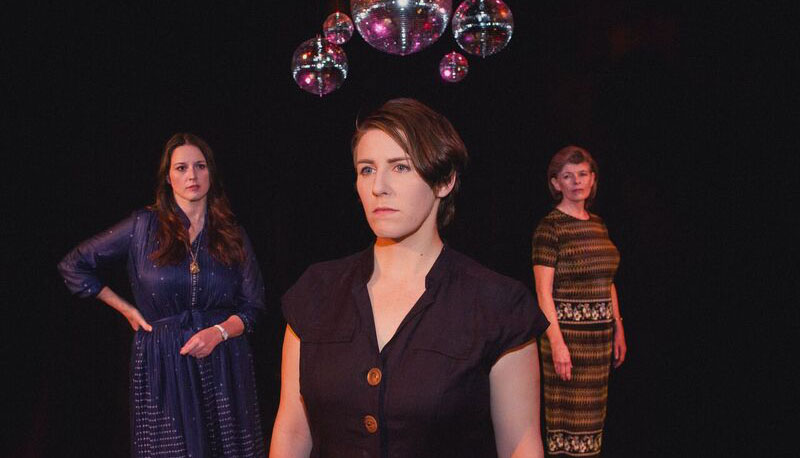 Matchstick Theatre closes out its season with its sixth and best show to date, John Mighton’s The Little Years. Better balanced and more accessible than its predecessors Bone Cage and The Woodcutter, and just as captivating as 59 Minutes and Bitter Rose, The Little Years holds your attention from start to end. As I’ve mentioned in previous reviews, Matchstick Theatre is gaining traction, and the proof is in the proverbial pudding with the talent reeled in for this show.

In a cast of heavy-hitters, Colleen MacIsaac takes on the lead role of Kate. Having helmed other deep and philosophical musings on the topic of life and mortality such as Dark Matter and The Blazing World, MacIsaac is in her element. Like the set’s mobile constructed of disco balls locked in planetary orbit, Kate is a misunderstood entity unto herself, doing her best to navigate the male-driven society of the late 1950s and onwards into the 2000s. Mired by the endless accolades of her older, favoured brother William, mostly from her mother Alice (LunaSea co-founder Mauralea Austin), Kate isn’t oblivious to the confines of her times. A once beautiful and precocious mind, she has seemingly devolved into a bitter shell of a woman who has squandered so much promise. The letdown that she didn’t go on to pursue more “womanly” occupations broils under MacIsaac’s eyes, yet I did find she didn’t have a ton of emotional range to play with. Her blunt, falsely-perceived pessimism gets under everyone’s skin- her complex questions regarding her obsession with time and space seem outlandish initially but continually hang in the air and minds of the show’s players. (The hilarious deadpan Matthew Lumley is a great example of this).

Helping Kate to find some semblance of happiness is friend and sister-in-law Grace (a fantastic Christine Daniels) who urges her to take charge in the new wave of 1970s female empowerment. Hearing Grace believe that the prevalent misogyny is a thing of the past is powerful and sad- it bears the frustrating reminder that time has an all-too stubborn way of spinning its wheels, of staying stationary rather than moving forward. The realization that Grace and Kate might just be two sides of the same coin is heartbreakingly potent and powerfully relevant to today’s times.

Congratulations to director Jake Planinc and co. for steering a seasoned group of actors to theatrical gold. It would, however, be remiss of me not to address Matchstick Theatre’s obsession with creating new seating arrangement setups within The Bus Stop Theatre. I’m all for shaking up the status quo if an idea works, but when an actor repeatedly commits the cardinal theatrical sin of having their back to the audience, it’s not the greatest idea. It’s an issue which has occurred for many of Matchstick’s other shows and one I hope is resolved next season.

Nevertheless, The Little Years sets out to address a very relevant issue in today’s very complex, conflicted time. It’s a work that’s brimming with emotion, frustration, and redemption. Based on what I’ve seen, playwright John Mighton buys very much into the belief that it’s never to late to make someone feel valued, to assure them they’ve made an impact in difficult times, and that their work was eternally meaningful to someone. The Little Years speaks the profound truth that we can’t prepare for the future if we’re stuck reminiscing about the past, and as we move on into unknown times, I’d say it’s an important thought to keep in mind.

The Little Years is at Bus Stop Theatre through the evening of Sunday, October 14th. Tickets are available online through Ticket Halifax.