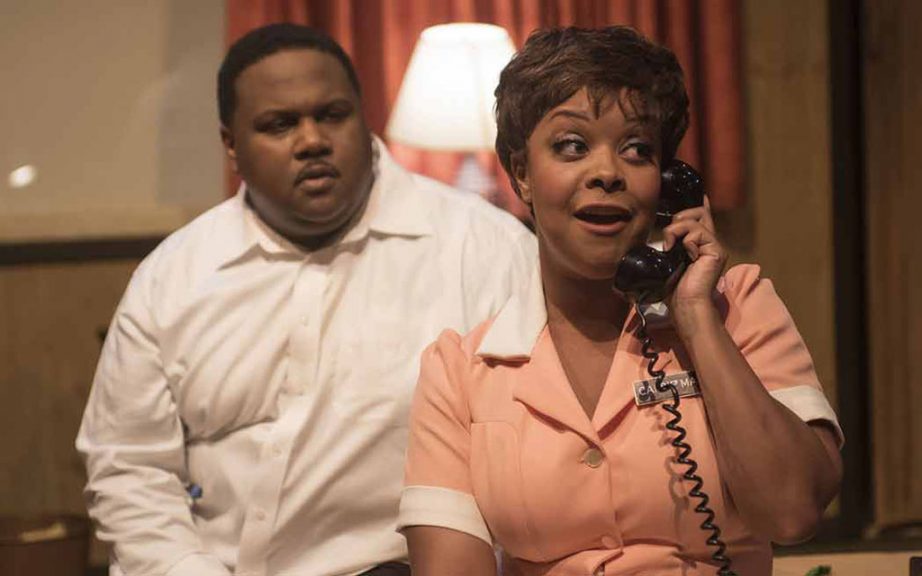 It’s in the early hours of April 3rd, 1968 and Martin Luther King Jr is in his room at the Lorraine Motel in Memphis, Tennessee. In a matter of hours he will be relegated to the pages of history, branded as an idyllic crusader for human rights and justice. If you think you have an idea as to what this play will be like, there is a likely chance you are mistaken. As described by director Ahdri Zhina Mandiela, “The Mountaintop is not only a raid on the deification of an unwilling martyr, but a poetic muse on the fragility of the human condition.”

As such, playwright Katori Hall provides a rendition of Martin Luther King (played by Tristan D. Lalla) many have never seen before. Arriving in his room following his landmark “The Mountaintop” speech, King immediately throws himself back into his next speech. It is clear from the outset that he adheres to the “best can’t rest” mindset; to slow down is to forfeit all momentum his movement has been gaining. Yet, for a man who shies away from embracing daunting titles like saint and martyr, he refuses to recognize his humanly limits. The personal toll his mission has exacted upon him is undeniable; he coughs and wheezes, existing solely on a diet of chain-smoked cigarettes, coffee, and brief late-night phone calls to his wife.

Equally present demeanour-wise is the status King has garnered. He is worshipped and admired among the black community, and while the amount of humility he displays towards his followers is impressive, true acclaim is impossible to shake. Nowhere is this more evident than it is with the arrival of a motel attendant named Camae (Letitia Brookes). Time away from home is a sacrifice for us all, and we the audience see how lonely King has become. In the wake of the witty, attractive, and funny Camae, King puts his skills as a gifted speaker (and perhaps a sliver of his status) to the test. He is suave and debonaire, letting his desires hang unspoken and implicit in the air. Camae, in turn, gives as good she gets, countering King’s moves without as much as batting an eyelash. If Lalla is thunder, Brookes is lightning and the result is an onstage chemistry ranking among the best I have seen at Neptune Theatre. Ever.

Lalla is a credit to his role. Building on solid script and direction, he is King. Echoing Mandiela’s words, he strips a legend down to his human essence. He is a man who, replete with his own urges and vices, cannot allow himself to be branded as a hero for doing what is so inherently right. More so, King is grounded as a mortal most by his inescapable sense of fear – a sentiment he understands is not confined to him alone, but rather, to history itself. Brookes plays beautifully to all of Lalla’s strengths. Even when the tone of the show changes as suddenly as a heart attack, Camae moulds King’s fear into a reminder that fear is the reason for his quest and, if left unaddressed, it will never be resolved.

As the play blazes to its conclusion, King realizes the scope of all he has accomplished and all that has yet to unfold. The true strength of The Mountaintop lies in the ability of one legendary man to be able to let go of his life’s work and to trust all those he has inspired to understand the message that we are all in this life together. Flawlessly acted with superb direction and stage design, Neptune Theatre has a true theatrical force on its hands that demands to be seen.

Neptune Theatre‘s presentation of The Mountaintop is on now through Sunday, March 18th; tickets are available online or at their box office (902-429-7070), at 1593 Argyle Street.

All photos credited to Andrée Lanthier.