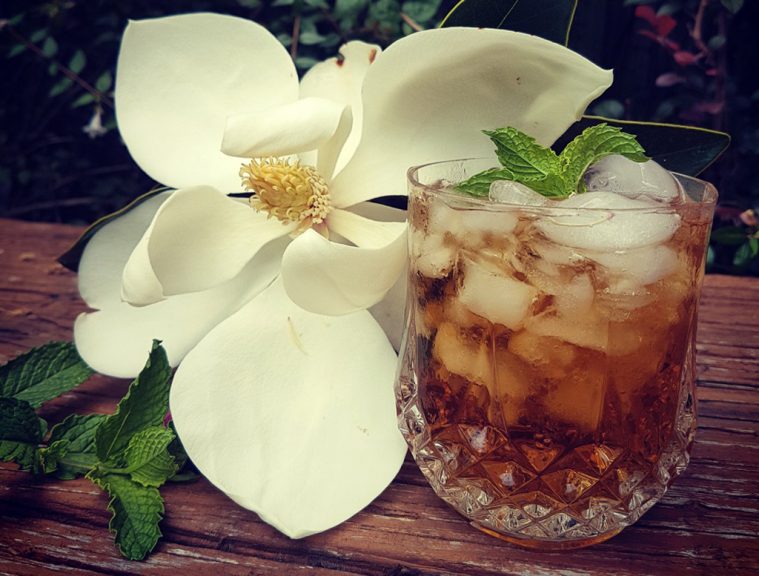 Crafting Libations is a regular feature on Halifax Bloggers. The hand-crafted cocktail movement involves the use of fresh seasonal ingredients, homemade cordials and syrups, small batch premium liquors, and good ice. Join writer, photographer, sommelier Colleen Thompson as she walks us through the seasons, making and shaking libations and telling stories.

Every summer, for the past ten years, we leave our home in Nova Scotia for a few weeks and head south to Wilmington, North Carolina. It is where my husband’s parents chose to call home after leaving South Africa in search of a new place to live. Travelling the length of the United States, taking a year, and following their gut, they started on the west coast and worked their way east, in search of a place to call home. The USA is a vast and beautiful place and there were many contenders. Sante Fe for its artsy coolness; the Florida Keys for its charm, but unaffordable real estate; Austin for its cultural renaissance. Purely by chance or fate, they turned off highway 95 following signs to Wilmington and in particular Wrightsville Beach and they simply never left.

After a lifetime spent in South Africa, it was Wilmington, North Carolina that resonated most strongly with them. This laid back Port City, whose history and folklore is intimately tied to the Cape Fear River, is the very reason Wilmington exists at all. The beautiful black water with its stark, grey eerie-looking cypress trees that greet you upon arrival. More than just the weather, there is an odd familiarity in this place. We have over ten summers started our own love affair with North Carolina. Perhaps it stems from southern African roots. It is in so many ways familiar. Both places tethered to their dark histories, living with their rough edges, and resilient because of it and for the most part moving forward in spite of it. Both heritages rooted in church, faith and conservative values. The people fundamentally good and altruistic.

Southerners, and in particular the Carolinas, like South Africans, are spontaneous and hospitable; they can throw a party on short notice; are very serious about barbecues and cooking on real fire; and good manners and respect for elders is insisted and instilled early on. There are also the familiar smells of my childhood like jasmine, honeysuckle and gardenias. The red cardinals that show up at the feeder and the corn meal porridge for breakfast both make a comforting summertime appearance.

All older southern women remind me of my auntie Pat, who as a child was always the most groomed, gracious and charming women I knew – who always smelled of youth dew perfume and drove a silver Jaguar. Elegant, well mannered, sweet, hospitable, where heritage and tradition trump all things, all the while withstanding the heat.

There are also new and enchanting discoveries, like the majestic magnolias that grow wildly all over Wilmington. Giant old trees with their large suede leaves, waxy ethereal flowers too beautiful to pick, their petals turning brown as soon as they are touched. Spanish moss, literally nonexistent to me until now. Ubiquitous and mysterious, drifting in slow motion and not entirely of this world, it drapes its long green-gray strands over hundred-year-old live oak trees all over the city.

Confederate roses are dotted all down the street where my in laws live. They are members of the hibiscus, but this incongruously named cool girl of the Southern garden flaunts peony-like blooms that can change from snow white to hot pink in a single day. Regional folklore has it, the rose’s once-white flowers soaked up the blood of dying Confederate soldiers, accounting for the colour change. So dramatic, so southern.

Over ten summers there are traditions that have crept into our lives too. Like eating Hushpuppies and drinking sweet ice tea at the Oceanic pier that juts out into the warm Atlantic Ocean. We always head to the same beach boardwalk at the far end of Shell Island to escape the crowd. We stroll past our favourite old mansions, behind their giant oaks and wistful Spanish moss. When the sun goes down and the nights are humid and cloying, we go for walks as a family under a Carolina Moon accompanied by a chorus of tree frogs and night birds. Eudora Welty, an American author who wrote about the south, was the first to pin down the idea of a sense of place in particular to the south. Everybody from the South senses it. But it is perhaps Marita Golden that summed it best for me: “Writers are always looking or headed for home. I have claimed at one point or other, every place as my home.”

A combination of wanting to find a cocktail that could cut the sweltering heat indexes of 40 plus degrees, a longtime fascination with southern literature, a husband’s love of bourbon, and a profusion of mint growing in the garden, lead me on a trail of R&D about mint juleps. Even the sound of the name can cool you off. A julep is the simplest of drinks – bourbon, mint, sugar and ice, but one of the most hotly contested in terms of preparation and a cocktail that comes loaded with stories of its own.

Historic and literary ties run deep. Margaret Mitchell mentions the libation several times in Gone With The Wind: “His breath in her face was strong with Bourbon whisky mingled with the faint fragrance of mint”. F Scott Fitzgerald gives it a nod in the Great Gatsby with, “the notion originated with Daisy’s suggestion that we hire five bathrooms and take cold baths, and then assumed more tangible form as a place to have a mint julep.” It’s reputed to be William Faulkner’s tipple of choice, and Ernest Hemingway, supposedly cantankerous with drink, once smashed a glass against a wall in a French barroom, yelling: “Doesn’t anyone in this godforsaken country know how to make a mint julep?”

Then there’s the whole Kentucky Derby thing. You don’t become the cocktail of choice, by being just any old drink. The mint julep ain’t the drink of Dixies in rocking chairs and a fly swatter. It’s more starched collars and big hats, people fanning themselves on large front porches, under whirling ceiling fans, moving about slowly and gracefully, that maybe only Southerners truly understand.

People have very strong opinions about the right and wrong ways to make a mint julep. Perhaps it’s something about the drink itself that inspires so many. Entire books and feature stories cover recipes and instructions from Charles to Dickens to Roosevelt on their preparation. In the fine words of General Simon Bolivar Buckner, who wrote his mint julep recipe to Major General William D. Connor on March 30, 1937:

“It is a rite that must not be entrusted to a novice, a statistician nor a Yankee. It is a heritage of the Old South, an emblem of hospitality, and a vehicle in which noble minds can travel together upon the flower-strewn paths of a happy and congenial thought.”

Little wonder it’s an intimidating drink for barmen, who often, even in the south, shy away from it completely. It is astounding how easy it is get it horribly wrong. We have had our fair share of sketchy, watery juleps from swanky hotel bars. But when it is made with care and good ingredients it might just be the best drink in the world.

So at the risk of offending the General and all those who hold it sacred, here’s my take on a Southern ‘African’ mint julep, to be sipped slowly in Nova Scotia by Bluenosers. God forgive me. Place your glasses in the freezer to frost, it’s important. Choose good bourbon, but it needn’t be outrageous. Bullet, Maker’s Mark or even, dare I say, Evan Williams will work. Take the time to pick the mint from your garden and make a mint simple syrup, it will reward you greatly. Failing that, buy mint and still make the syrup. Follow the instructions below…very closely.

10–12 leaves of mint, plus a sprig for garnish
1 cup water
1 cup granulated sugar

In a small saucepan over a medium heat, bring the water, sugar and mint to a boil. Lower the heat and simmer for 10 minutes. Remove the saucepan from the heat and allow the syrup to cool down for approximately 30 minutes.

Place lowball glasses in the freezer to frost (at least 30 minutes before).
Combine the mint, simple syrup, and 1/2 ounce of bourbon in a mortar and pulverize it with a pestle.
Add the remaining bourbon and let it rest while you fill a lowball glass with crushed ice to the rim.
Pour the bourbon mixture over the crushed ice.
Garnish with fresh mint and a slice of lemon. 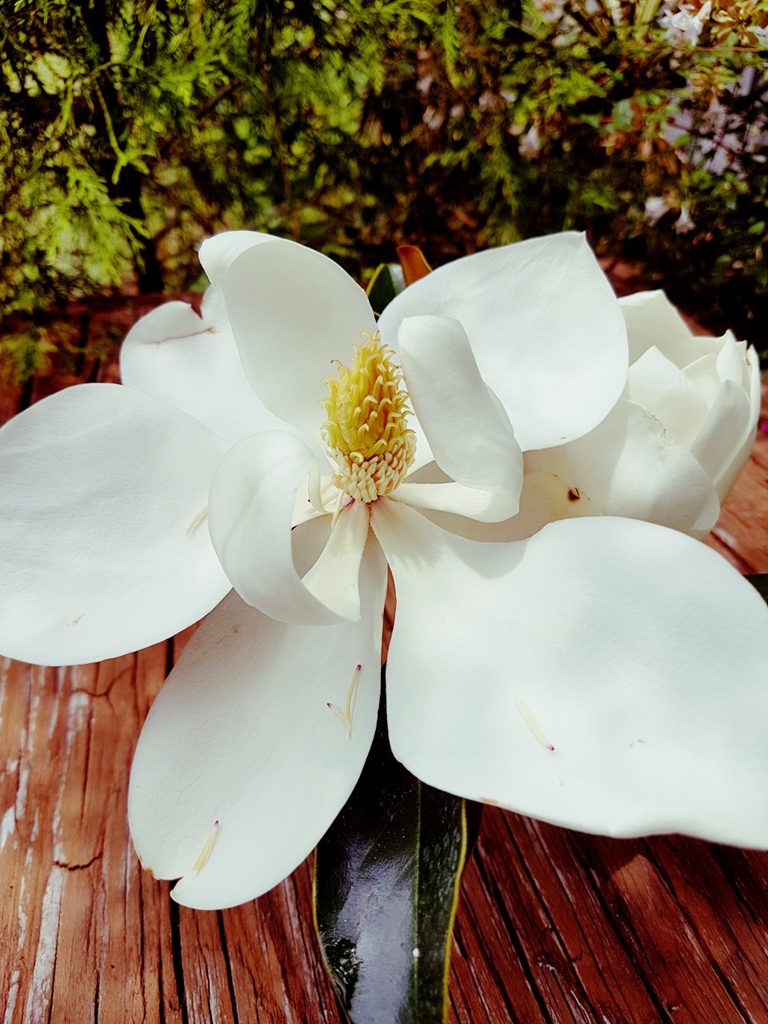 Colleen Thompson is an author, writer, photographer and blogger of Monkey Weddings & Summer Sapphires. The blog and the book by the same title was inspired, in part, by one of her fondest childhood memories. In Johannesburg, when it rains and the sun is still shining it's called a 'monkey's wedding.' Monkey Weddings & Summer Sapphires is a lovely telling of a childhood and young adulthood spent in South Africa, of travels around the world, and of settling into a wonderful, happy adult life and motherhood in Nova Scotia. Part memoir, part recipe collection and part travelogue, the narrative is told through the seasons often showing similarities and differences alongside anecdotes, coincidences, memories and traditions.