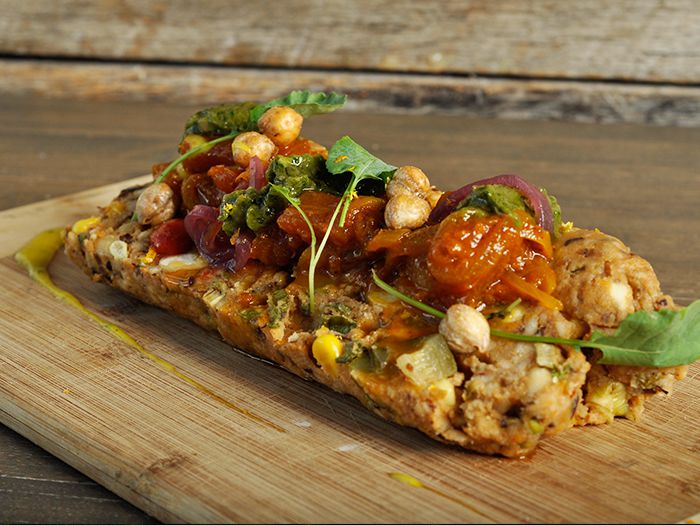 I guess I don’t get out much. Out of the peninsula, that is. At least that’s the conclusion I reached when I went to Piez Bistro (rhymes with “tries”, not “bees”, like I had thought) in Dartmouth for the first time last night for Sausage Fest. A place this good should have been on my go-to list.

We were headed down to try the Vegan Piez Dog (pictured above), so I brought my vegan partner with me. I mean, look at the thing: sweet potato, black bean, cashew sausage w/ corn succotash, pickled carrot and hemp arugula pesto. Vegan can be damn tasty.

When we arrived, chef Leslie Hull gently broke the news that they were sold out of the dog. Too popular. (They’ll be restocking by Saturday). Serves me right for waiting this long. For me the runner-up choice was easy: the also-on-Sausage-Fest-special Piez Sumac Pizza. Sumac sausage, olive tapenade, arugula, artichoke, and feta. Sold. But what of my vegan accompaniment? Would she be out of luck absent the vegan dog we came for?

Worry not, said chef Hull. “I do a wide variety of vegan dishes, and gluten-free, dairy-free dishes. I just come up with dishes every day. Everybody seemed to enjoy the vegan sausage, it’ll probably stay on our menu.”

Hull is a specialist at making what some may call “picky eaters” feel like they’ve found their place. “I have a huge vegan following. It’s easy to make something that someone will absolutely like, given we know where all of our ingredients come from and we make everything from scratch.” My partner built her own vegan pizza, including caramelized onions, sundried tomato, roasted garlic (huge, intact, roasted garlic bulbs), and a vegan almond-based topping that melted exactly. like. cheese. It rocked her world.

Even the sumac sausage in my Sumac pizza was hand made by Hull. Quinoa, pistachio, sumac (“a berry from a middle eastern country,” explained Hull. “It’s very lemony”), parsley, lemon, pork belly, and bacon fat. Along with the artichoke, feta, and corn the pizza was ridiculous. My partner and I both agreed our pizzas were top three we have ever had.

If you’re like me, a late-comer to the Piez Bistro game, make things right and head on over.