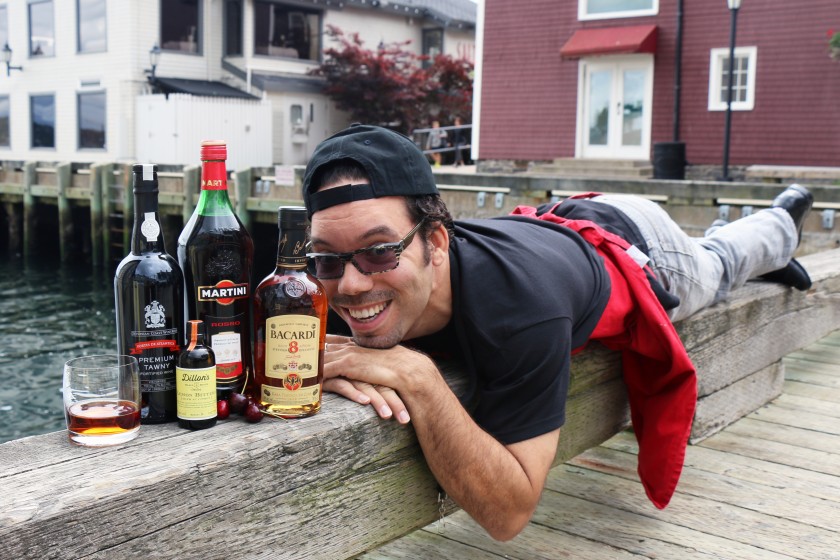 It won’t be the typical Lower Deck experience, but it’ll be a good one — on Saturday, August 23 from 5pm until midnight, The Lower Deck will become BACARDI’s Festival Libre. Haligonians far and wide are invited to their  night of samba and fire dancing, cigar rolling, music, and mixed drinks.

Here are some of the types of drinks you can expect. And if you’re worried that this will be a pretentious affair, you will be relieved to meet BACARDI mixologist Trevor Burnett. We got to chat with him and he’s a hoot. He also knows his rum.  We think you’ll enjoy chatting with him, too. BACARDI mixologist Trevor Burnerr, enjoying some Cow’s Ice Cream next to his handiwork: the Haligonian Mojito.

He’s a mixologist, but his secret passion is storytelling. Ask Trevor Burnett, Bacardi mixologist, how different rums influence the flavour of a mix and you’ll get your answer — but you’ll also get some downright gleeful conversation about rum history, regional influences, and anecdotes tossed in for good measure.

“I’m a people person, I really like that interaction,” says Burnett. “And as I travel around I like to meet new people and pick up new flavour influences.” The first drink he mixed for us, what he’s calling the Haligonian Mojito, features Nova Scotia blueberries.

“I actually cooked up some syrup yesterday at the Bicycle Thief. They were really kind and let me use their kitchen to boil down the blueberries. I’ve also got some Ironworks here that I’ll be using in some of the cocktails, which mixes really well with Bacardi rum, and it’s a great local product.”

Burnett has a palpable passion for learning and growing as a mixologist. From bar back to bar tending at hotels, then cruise ships and now touring mixologist, Burnett recalls how the experiences he has had have helped him to grow his craft.

“If you ever get a chance,  go to New Orleans,” he says. “It’s sort of the birthplace of the cocktail, and that’s where all the history with the Acadians — the pioneers of Louisiana — made their way down to Mississippi and established the land. The cocktail is an over 200-year-old American tradition.”

“When I came to Nova Scotia, I wanted to know about your high bush blueberries, about your maple syrup, when the seasons are, how is it different from other provinces. I just asked people here and I was quickly able to get educated about it.”

Burnett loves beer and wine, too, but as a mixologist he loves the versatility of rum. “Unless you’re a brew master or a distiller or a wine maker, the creativity for those drinks ends at the bottle. They’re like soloists. Rum is like a member of a band. It leaves more room for creativity in the hands of the bartender. Cocktails can be played with the change with the environment or for the individual, you can personalize them.” As their mixologist, Burnett is proud of Bacardi and its history; over 150 years of it. “There’s a big legacy that Bacardi owns. They’ve had a big impact in the history of cocktails. If you look in any book there’s always a section for Bacardi because of all of the innovations they have been responsible for.”

Head to The Lower Deck today at 5pm until midnight and try some of Trevor Burnett’s cocktails.