Gordon Stephenson was brought in by Halifax Council in 1957 to develop a plan for slum clearance. Stephenson was considered to be an expert in urban renewal and, as advocated by modernists like Corbusier, used scientific rigor to justify his findings.

Stephenson was well educated, having studied at the School of Architecture, University of Liverpool, between 1925-1930 and the Institut d’Urbanisme, University of Paris, between 1930-1932.  His time in Paris would have been after Corbusier published “Vers une architecture” (Toward an Architecture, previously mistranslated into English as Towards a New Architecture) in 1923, so he would have been familiar with the work and the ideas it contained. Some sources suggest he worked in Corbusier’s practice.

Prior to his time in Canada, Stephenson also worked in Australia. In the Australian experience, Walter Burley Griffin laid out the capital city of Canberra based on Garden City principles in 1912. Stephenson would have been very familiar then with Garden City , and modern ideas in town planning.

During his time in Canada, Stephenson served as a planning consultant to the cities of Toronto,  Kingston, Sudbury and Ottawa, Ontario, as well as Halifax, and taught at the Universities of Toronto and British Columbia, between 1955-1960.

It is with this resume, that he was selected by the city of Halifax and CHMC to undertake the redevelopment study for Halifax. In his report on Halifax, he made extensive use of studies and surveys to document the conditions of the city and justify its redevelopment. Stephenson’s report begins with a historical review of the city, and a collection of photographs showing the picturesque areas of the city, and finally ends with blighted neighborhoods. 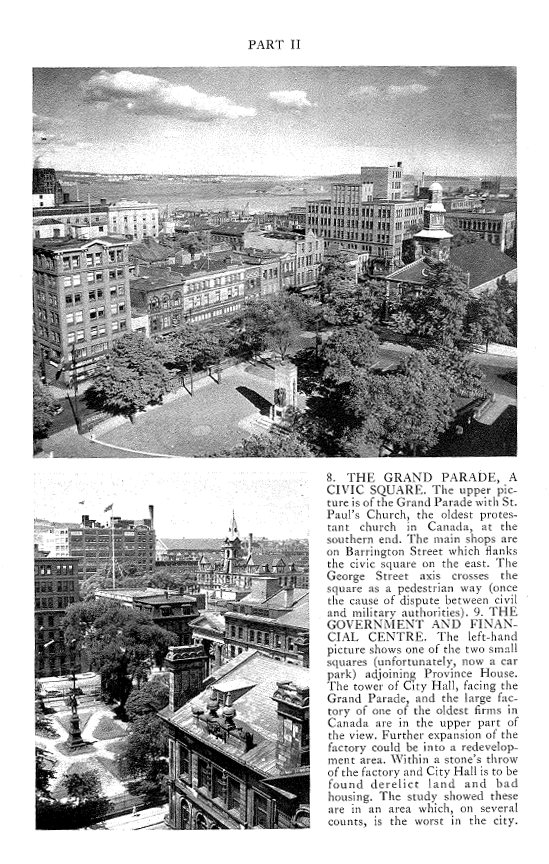 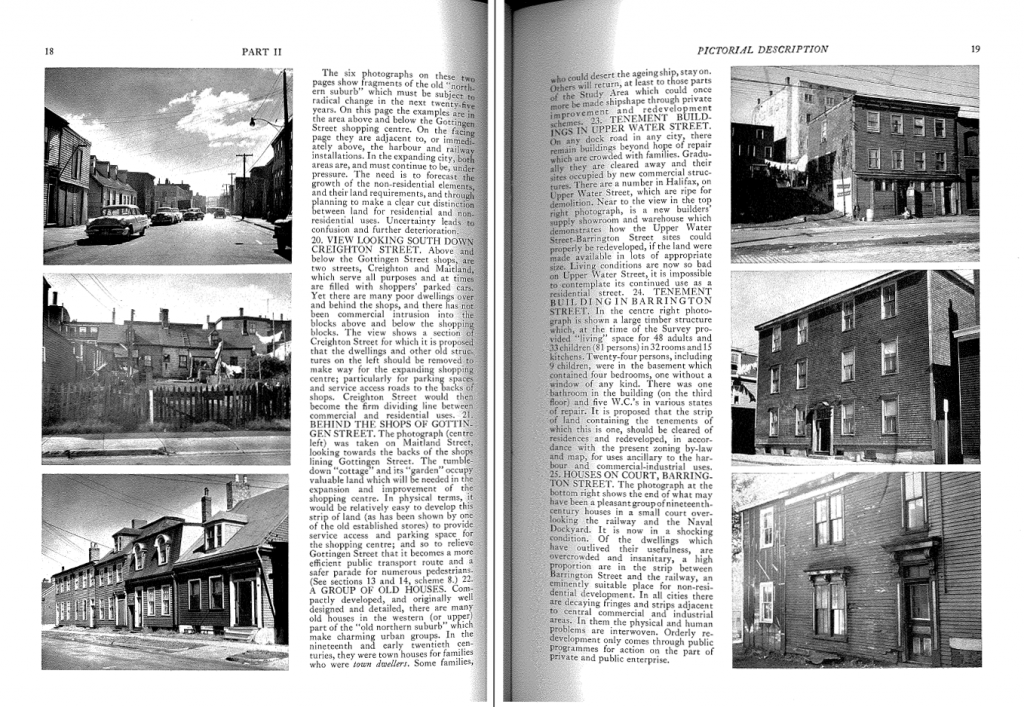 In Section III, Stephenson begins to describe the problems and proposals for Halifax. He determines that the majority of growth will be suburban, however this will leave the core to remain run-down and blighted. “Here many of the worst dwellings are to be found, and with them social and economic difficulties.”

Perhaps ironically, Stephenson points out what uncontrolled suburban growth will cause:

“…the money to put them right will mount inexorably. It is estimated that it will cost $5000-6000 per house in some places to provide water and sewers to cheap houses which are now laid out in sprawling fashion on rocky land. It was cheap land – but it will be very costly land by the time the community as a whole has paid the price.”

“Clearance and re-development in the city will undoubtedly increase efficiency in the hub of the metropolitan region, and remove some of the slums in the worst parts.”

On the harbour and central area, Stephenson suggests re-developing the ferry terminal area, to bring the harbour into the urban scene, and to provide parking for 300 cars (below). 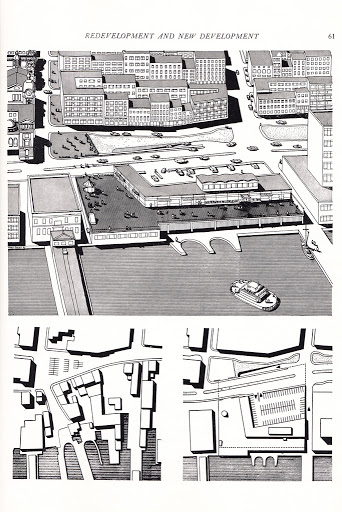 Stephenson calls George Street east of Grand Parade an architectural and financial asset to the city. It is a Wall or Bay Street in miniature. Redevelopment of the western end, however, is strongly suggested. Stephenson goes on to identify the worst end of Halifax as the central area that lies between City Hall and Jacob Street. “With the exception of the blocks between Barrington and Argyle, it is in generally deplorable condition” writes Stephenson. He suggests “the clearing of this area should have the highest priority”. (This area is today Scotia Square.) He goes on to advise that accommodation must be made for the displaced, and proposes a new 4-lane highway connecting Cogswell Street with Water Street to  help speed traffic to the ferry terminal car park, and make the development of the newly cleared site more attractive.
Stephenson identified that most traffic entering the city from the Macdonald Bridge will use Barrington Street. He suggests that Barrington Street “should become an approach road worthy of the city, and that there should be extensive clearance of old housing along its length” with new housing on the western side, and none permitted on the eastern (harbour) side.
The report makes several other recommendations about controlling growth and development on Gottingen and Spring Garden Road, and several other areas.  Stephenson describes Africville as a little-frequented part of the city…described as an encampment or shack town. Buildings and sanitation are deplorable. Stephenson recommends families be rehoused, as the land they occupy will be needed for development in the near future.
The report continues into the scientific study of the city to justify the recommendations. In part 4, he examines the human conditions in the overall city.  By doing this, Stevenson is able to show the study area to be the most densely populated, most crime ridden and unhealthy part of the city. I have excepted his maps below to focus on the study area.

Stephenson basically shows by dot density how bad the study area is compared to the rest of the city. The more dots, the worse the conditions are.  In Part 5, he then goes on to look at the specific structures in the area. Part 5 was completed by a block-by-block survey which was conducted as part of the study.

In parts 4 and 5, Stephenson is able to use scientific factual study to justify the redevelopment of large areas of Halifax based on the human and built conditions of the areas. He then goes on to define several redevelopment areas that should be cleared. 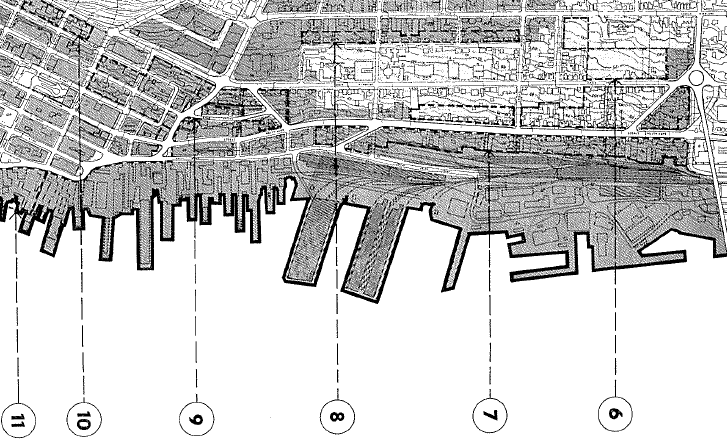 Area 6 is what would become Uniacke Square, Area 7 would be cleared and largely remain so to this day, and Area 9 would be Cogswell and Scotia Square.  For Area 6, a new library and playground are recommended. On Area 9, Stephenson writes “There are three proposals for the City Center. The first involves sweeping away the worst housing in the City, which is in the vicinity of Jacob and Market Streets. This would provide excellently placed commercial sites, and a much needed road improvement by connecting Cogswell Street to Water Street on a new alignment.”

Given that he suggests most of the central area be redeveloped commercially,  he acknowledges that additional housing must be located for the displaced people. 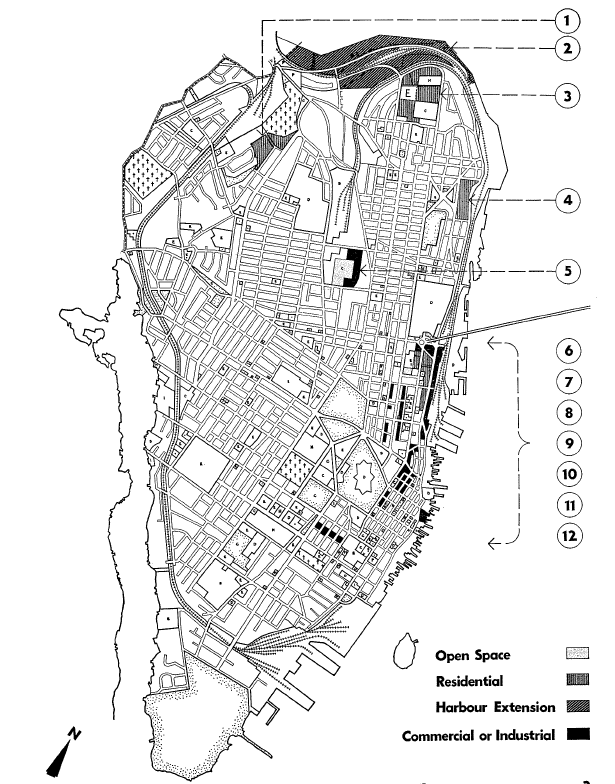 The overall scheme is quite comprehensive. The central study areas are recommended to be converted primarily to commercial and industrial uses. Africville is flagged for harbour expansion (2).  Bayers-Westwood(1), Rockhead Prison (3) and Mulgrave Park (4) are suggested as a site for new housing, as is the area that would become Uniacke Square, and the Ocean Towers. The report recommends re-housing Africville residents at  the Rockhead site.

The Halifax City Archives has the report available online in PDF.

The report was presented to Council, Approved, and Expropriations and Demolitions in the Jacob Street Area (Which would become known as the Central Redevelopment Area) Began in February 1958.