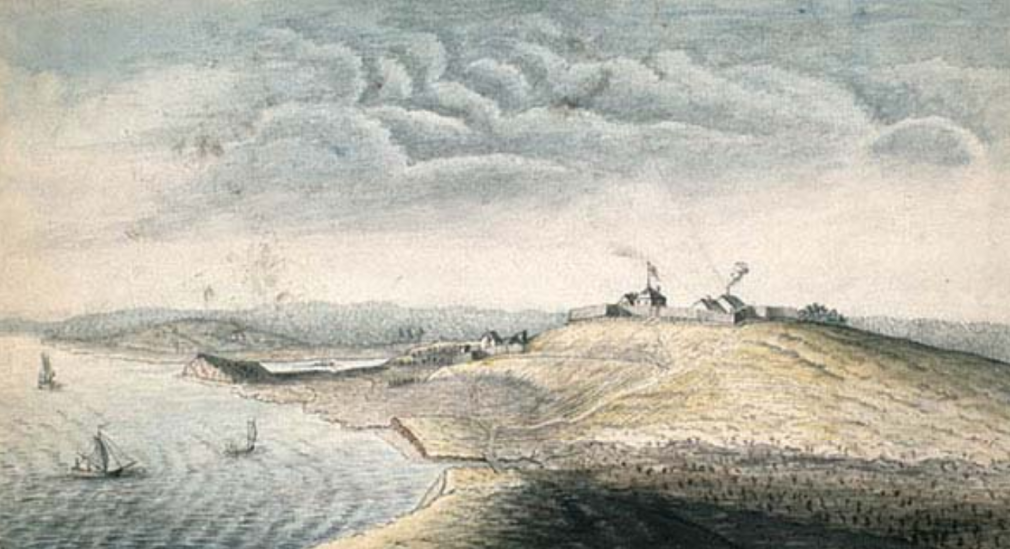 The blockhouse was the basic British defensive position. Hundreds of them were built in Canada, and Halifax’s early defences  consisted of numerous blockhouses. A series of 3 defended the peninsula from the mainland (approximately along the modern Joseph Howe Drive). The original fort at the Citadel was a blockhouse, and others were located at the Dockyard, Dartmouth Cove, and in Sackville. Blockhouses were also built in Lawrencetown and Lunenburg. Though blockhouses across the country all differ in appearance, the blockhouse was typically a 2 story structure with an overhanging second story. The overhang allowed downward fire to be directed on anyone attempting to breach the first story. Blockhouses were constructed of square timbers laid horizontally on each other. It was the thickness of wood which offered relative security against musket balls and arrows. Long hardwood dowels or “tree nails” were inserted through the  logs at regular intervals to add strength. Small crevices between the timbers were caulked.  The interior walls were sometimes plastered; the exterior walls were either clapboarded or shingled to prevent the deterioration of the square timbers. The Fort Edward blockhouse has four portholes in the upper storey, one in the centre of each side. The original guns were four-pounders without carriages. They probably rested on swivel mountings. To give a sense of scale, the second floor window is 18″ above the floor. The ports above are for muskets, and are meant to be used while standing. An exact plan of Fort Edward at Pesaquid, 1757

The Fort Edward blockhouse stood within a stockaded fort. The palisades at Fort Edward described the perimeter of the fort — a regular square 85 yards long on each side, with bastions in the four corners. A ditch surrounded the picketing. The picketing  usually was composed of cedar posts 10 to 14 feet long and pointed at the top. A trench was dug below frost level and the pickets placed into it. Wooden stringers strengthened the palisade.

Today all that remains is the blockhouse and the grounds.

14 blockhouses were built in Halifax. The 3 blockhouses previously mentioned were built quickly once the city of Halifax had grown beyond the Palisades. The easiest way to defend the town from ground attack from natives or the French was with the addition of 3 blockhouses to close off the peninsula from the mainland. The middle one was documented by Harry Piers, Provincial Archivist in the 1930s. The middle peninsula blockhouses at Halifax, 1751, by Harry Piers; a, plan of the site of the blockhouse and stockade; b, perspective restoration looking northwest; c, general contour plan and section of the site.

During the Revolutionary War, an octagonal blockhouse three storeys high, 50 feet in diameter and designed to barrack 200 men was constructed in 1776; it was built in a large square redoubt on the summit of Citadel Hill. Besides the Blockhouse, the defences on the hill consisted of a maze of batteries and irregular earthwork begun in 1761. Fort Massey and Citadel Hill Blockhouses, 1780, from Point Pleasant Battery. By Lieutenant Colonel Edward Hicks, was stationed in Halifax from 1778 to 1782

There was an additional blockhouse at Fort Massey. Fort Massey was built on a small hill south of the Citadel at the corner of  South and Queen streets. This fort covered the southern approach to the Citadel and protected green-bank and barbette batteries below it.  A blockhouse designed to accommodate 39 men was built, as were 2 barracks and a small magazine.