Thanks to Steve Boyko’s Confessions of a Train Geek blog for making me aware of this.

The railway station in Amherst is facing an uncertain future. Still owned by VIA, it was closed in 2012 when The Ocean went to 3 days a week. The train still stops; however, the train crew handles customer service.

There were plans  for the town to operate an artisan market in the station, but pipes burst last winter, causing $200,000 in damage. VIA is looking to sell the station to the town, but the town requires a use for it. 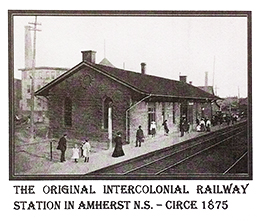 The Intercolonial Railway (ICR) opened its line from Truro to Moncton on 9 November 1872. Initially the ICR served Amherst passengers from a station constructed of wood on the same site as the present-day structure. The present structure was opened on 31 August 1908 and is constructed of local red sandstone.

Several minor modifications have been undertaken to the structure in recent decades, including removing the south wing in 1975, replacing the bottom exterior stone in 1991 with stone from the Roman Catholic Church once located on Prince Arthur Street, and in 1992 new metal exterior doors were installed.

Amherst Station is protected under the federal Heritage Railway Stations Protection Act. The act responded to long-standing and widespread concern that Canada’s heritage railway stations were not being afforded an adequate level of protection. The initiative of a private Member of Parliament, the Act received support from all parties.

Since 1990, the Historic Sites and Monuments Board of Canada has evaluated almost 300 railway stations, more than half of which were designated heritage railway stations. To be considered, a railway station must be owned by a railway company subject to Part III of the Canada Transportation Act; and be more than 40 years old.