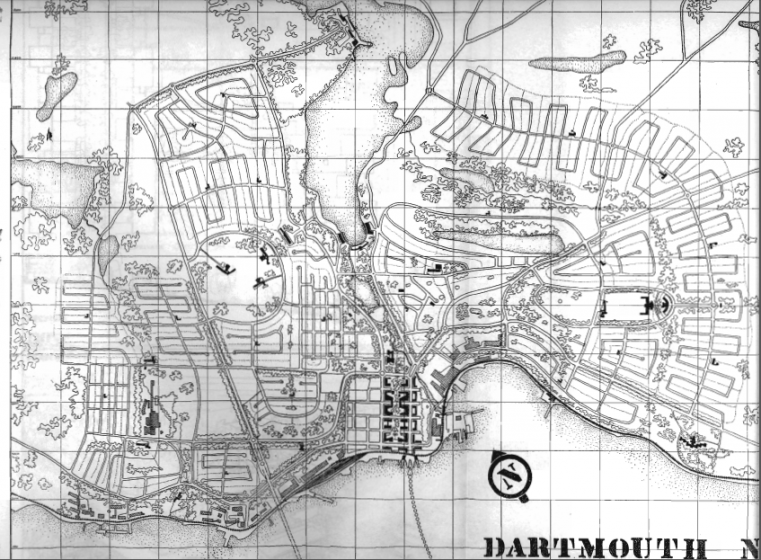 With Halifax developing a master plan in 1945, the town of Dartmouth felt it should have one as well, and council approached the Nova Scotia Municipal Bureau and the Department of Municipal Affairs for assistance. The department provided the funding, and the bureau produced the report.

The actual report was written by architect D.P. Reay and his wife. (The wife is only referred to as Mrs. Reay, and it is noted that she was a graduate architect). The report was limited in scope, and also a part-time effort, as Reay was still in active service with the RCAF. It was to serve as a general plan, with the aim of controlling growth, and serve as a foundation for a larger regional plan at a later date. 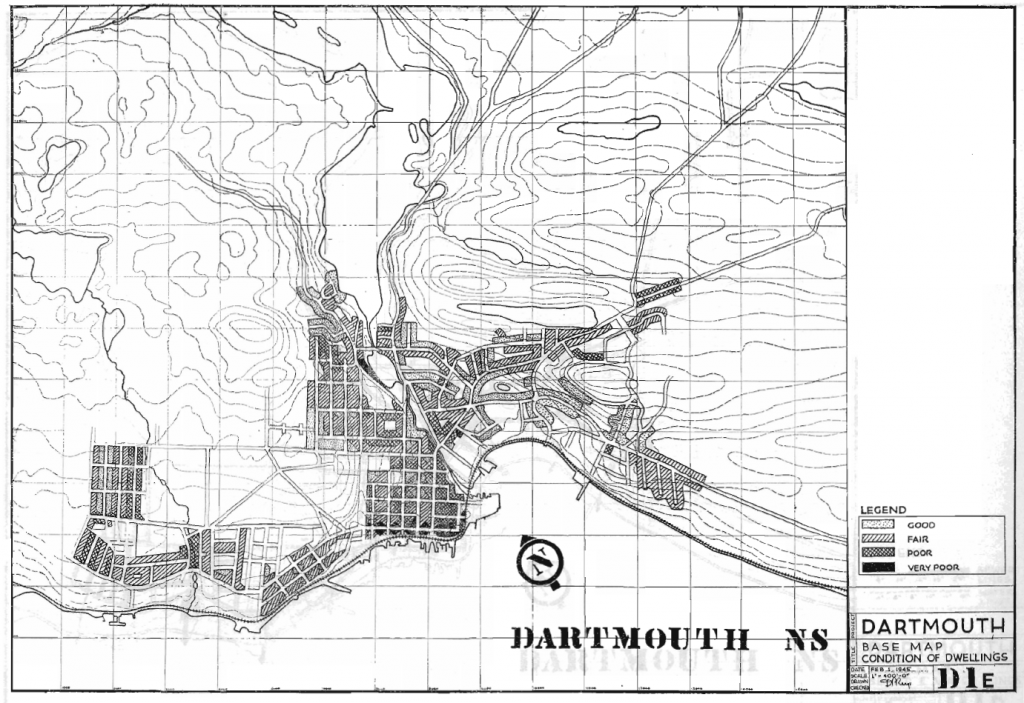 (a) a beautiful site, largely unspoilt;
(b) no glaring faults in the land use pattern: the natural industrial zone along the waterfront and the main dwelling areas overlooking the lakes are kept relatively distinct

Unfavourable  features are reported to be:

(a) a high proportion of buildings and dwellings in poor structural condition and poorly laid out;
(b) the sewer system leaves much to be desired in its ability to cope easily with any future expansion ;
(c) a great deal of paving remains to be done;
(d) small playgrounds and parks are inadequate

And finally concludes by stating:

The problem then, is to find the simplest possible way to eliminate existing defects, and to enhance and develop the many inherent and existing advantages, while keeping within the bounds of financial practicability.

The plan makes modest assumptions about growth, assuming it will continue at the present rate, though may be higher if the harbour bridge is completed, and as such the plan should take this into account. The bridge is assumed to change traffic patterns, and the thought is to move residential and recreational zones to the top of the hill, and to leave the harbour front to industry, with road,rail and harbour links. 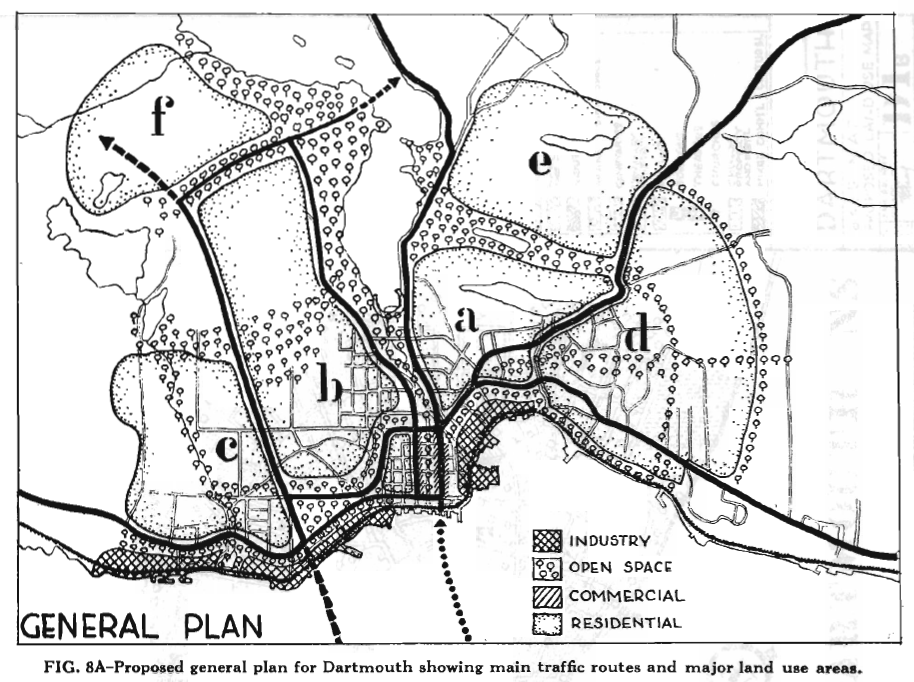 The plan recommends 2 main east-west routes coming down and joining with Portland and Octerlony Streets. Combined with Pleasant Street, these will serve as the main circulation out of the residential areas to the town centre. The plan also calls for extending the Lake Banook/Sullivan’s Pond park down to Queen Street, which would be converted to a pedestrian mall, and be the main portion of a commercial and shopping district; and suggests locating the new town hall, library and other civic buildings in this area.

The centre of Dartmouth would then consist of a long formal park strip, some old buildings on Queen Street being  preserved in it no doubt, and leading up from the ferry past the High School to the natural centre of the town just in front of the old dam at the foot of Sullivan’s Pond.

It also recommends the removal of the Starr Manufacturing Building to open that space up for recreation, and provide for a continuous park from Sullivan’s Pond. The plan makes suggestions on improving road layouts should the bridge be built, and then fills in the areas between the roads with new development. These developments are planned to be “pleasant places to live” and not “haphazard developments so common in our small towns and cities”. With this in mind the report suggests new homes be private, with a large lot, and all rooms have a pleasant view to open space. Houses should be away from industry and heavy traffic and railways, with adequate car storage, and stores within walking distance. The grid pattern is rejected, as it consumes additional space reducing taxable development and increasing costs. The report goes on to warn against blight, and how redevelopment of these areas can improve the efficiency of the municipality, warning blighted areas “breed crime and disease, and they are not democratic”. 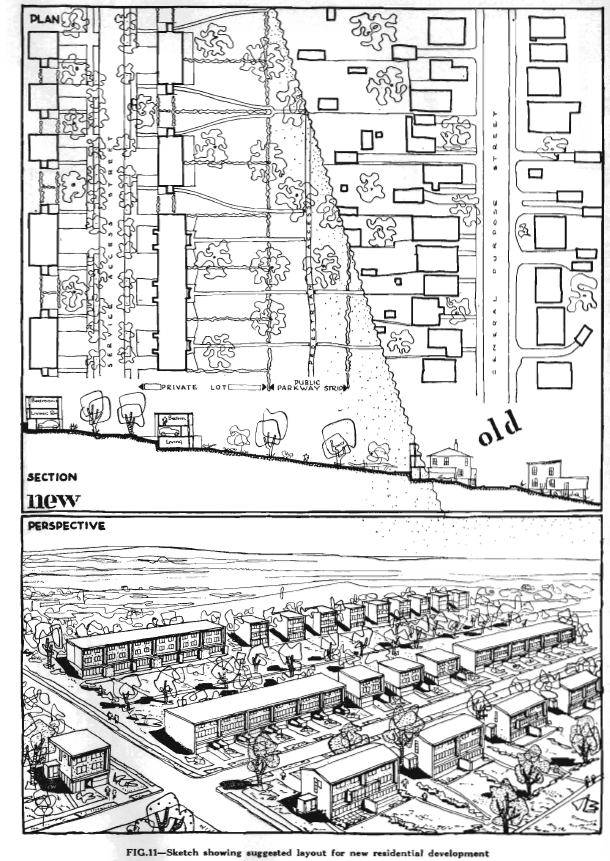 The major advantage to a town of a well planned and socially balanced neighbourhood unit, from the financial point of view, is that its virtues are built into it from the beginning in the way of parks, quiet traffic-free streets, convenient shops, etc. There is a place for everything and everything is in its place.